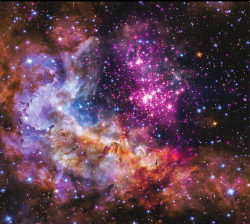 
The exploration of the space beyond earth has been largely conducted using a single sense: vision. Most of our knowledge of the cosmos, from the big bang to modern times, has been obtained through the analysis of the emission of some form of light. For a long period of time our understanding was limited to the study of phenomena generating the narrow band of light to which our eyes are sensitive, but now we've expanded our sensitivity to the entire spectrum of electromagnetic radiation, even the invisible parts. But to study invisible sources like stars that emit in the X-ray or radio bands requires us to translate that information into something our senses can understand. Historically, this has been the sense of sight. But there's no reason to limit ourselves. You can now touch the invisible X-ray Universe if you'd like. You can also listen to it too, through a process known as sonification. Sonification converts visual information into sound. This enables us to explore the Universe in an entirely new way, which can reveal subtle patterns in nature that might be missed by our eyes. It's been used by the good people at the Chandra X-ray Center to convert stunning X-ray images into sound. The image above shows a composite X-ray image (from the Chandra X-ray Observatory) and optical image (from the Hubble Space Telescope) of Westerlund 2, a massive cluster of young stars. Brighter sources correspond to louder sounds, while the vertical location of a source corresponds to the frequency or pitch of the sound, making a beautiful cosmic symphony - go have a listen.


Space is mostly quiet. Data collected by telescopes is most often turned into silent charts, plots, and images. A "sonification" project led by NASA's Chandra X-ray Observatory and NASA's Universe of Learning program transforms otherwise inaudible data from some of the world's most powerful telescopes into sound. This effort makes it possible to experience data from cosmic sources with a different sense: hearing.

The latest installment of this sonification project features a region where stars are forming (Westerlund 2), the debris field left behind by an exploded star (Tycho's supernova remnant), and the region around arguably the most famous black hole (Messier 87). Each sonification has its own technique to translate the astronomical data into sounds that humans can hear. ...


viewtopic.php?t=41029
Know the quiet place within your heart and touch the rainbow of possibility; be
alive to the gentle breeze of communication, and please stop being such a jerk. — Garrison Keillor
Top

I love the sounds of Westerlund 2!


<<Personification occurs when a thing or abstraction is represented as a person, in literature or art, as an anthropomorphic metaphor. The type of personification discussed here excludes passing literary effects such as "Shadows hold their breath", and covers cases where a personification appears as a character in literature, or a human figure in art. The technical term for this, since ancient Greece, is prosopopoeia.

In the arts many things are commonly personified. These include numerous types of places, especially cities, countries and the four continents, elements of the natural world such as the months or Four Seasons, Four Elements, Four Winds, Five Senses, and abstractions such as virtues, especially the four cardinal virtues and sins, or the nine Muses. Death envisaged as a skeleton, often with a scythe and hour-glass, is a late medieval innovation, that became very common after the Black Death. However, it is rarely seen in funerary art "before the Counter-Reformation".

An unusually powerful single personification figure is depicted in Melencolia I (1514) an engraving by Albrecht Dürer. The print's central subject is an enigmatic and gloomy winged female figure thought to be a personification of melancholia – melancholy. Holding her head in her hand, she stares past the busy scene in front of her. The area is strewn with symbols and tools associated with craft and carpentry, including an hourglass, weighing scales, a hand plane, a claw hammer, and a saw. Other objects relate to alchemy, geometry or numerology. Behind the figure is a structure with an embedded magic square, and a ladder leading beyond the frame. The sky contains a rainbow, a comet or planet, and a bat-like creature bearing the text that has become the print's title.

Dürer's engraving is one of the most well-known extant old master prints, but, despite a vast art-historical literature, it has resisted any definitive interpretation. Dürer may have associated melancholia with creative activity; the woman may be a representation of a Muse, awaiting inspiration but fearful that it will not return. As such, Dürer may have intended the print as a veiled self-portrait. Art historian Erwin Panofsky wrote that "the influence of Dürer's Melencolia I—the first representation in which the concept of melancholy was transplanted from the plane of scientific and pseudo-scientific folklore to the level of art—extended all over the European continent and lasted for more than three centuries.">>