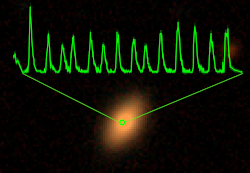 
If you keep an eye on the entire sky, you're bound to find some interesting, strange things going on. The more intently you look, the larger number of peculiar sources you find, and the longer you look, the more variable sources you see. The X-ray sky is particularly chock full of interesting sources that vary on a large range of timescales, from decades to milliseconds. Even seemingly innocuous sources can behave badly if you watch them long enough. The eROSITA telescope on the Spektr-RG spacecraft is an excellent facility for probing the weird things that go bump in the X-ray night, since every six months it takes a complete picture of the X-ray sky (which it's been doing since its launch in July, 2019). The image above is an excellent example of the sort of breakthrough science that eROSITA does. The image shows a false-color optical picture of a rather nondescript galaxy which goes by the mundane name of 2MASS 02314715-1020112. However, during scanning observations, eROSITA found something very strange: unusually strong X-ray variations from this galaxy occurring every few hours. Followup observations by the Neutron Star Interior Composition Explorer (NICER for short) were able to trace out these variations in detail, as shown by the green graph at the top of the image. The detailed monitoring of this galaxy by NICER nicely showed that the X-ray variations seen by eROSITA were part of a nearly-periodic signal coming from the galaxy itself, with nearly regular peaks occurring roughly every 18.5 hours. The nature of these variations, dubbed "quasi-periodic eruptions" by scientists, is not well determined. Researchers think that these strange pulses may in fact be the signal of an unfortunate star circling the supermassive black hole at the galaxy's center, about to be torn apart and swallowed.


Using the SRG/eROSITA all-sky survey data, scientists at the Max Planck Institute for Extraterrestrial Physics have found two previously quiescent galaxies that now show quasi-periodic eruptions. The nuclei of these galaxies light up in X-rays every few hours, reaching peak luminosities comparable to that of an entire galaxy. The origin of this pulsating behaviour is unclear. A possible cause is a stellar object orbiting the central black hole. As these galaxies are relatively close and small, this discovery could help scientists to better understand how black holes are activated in low-mass galaxies. 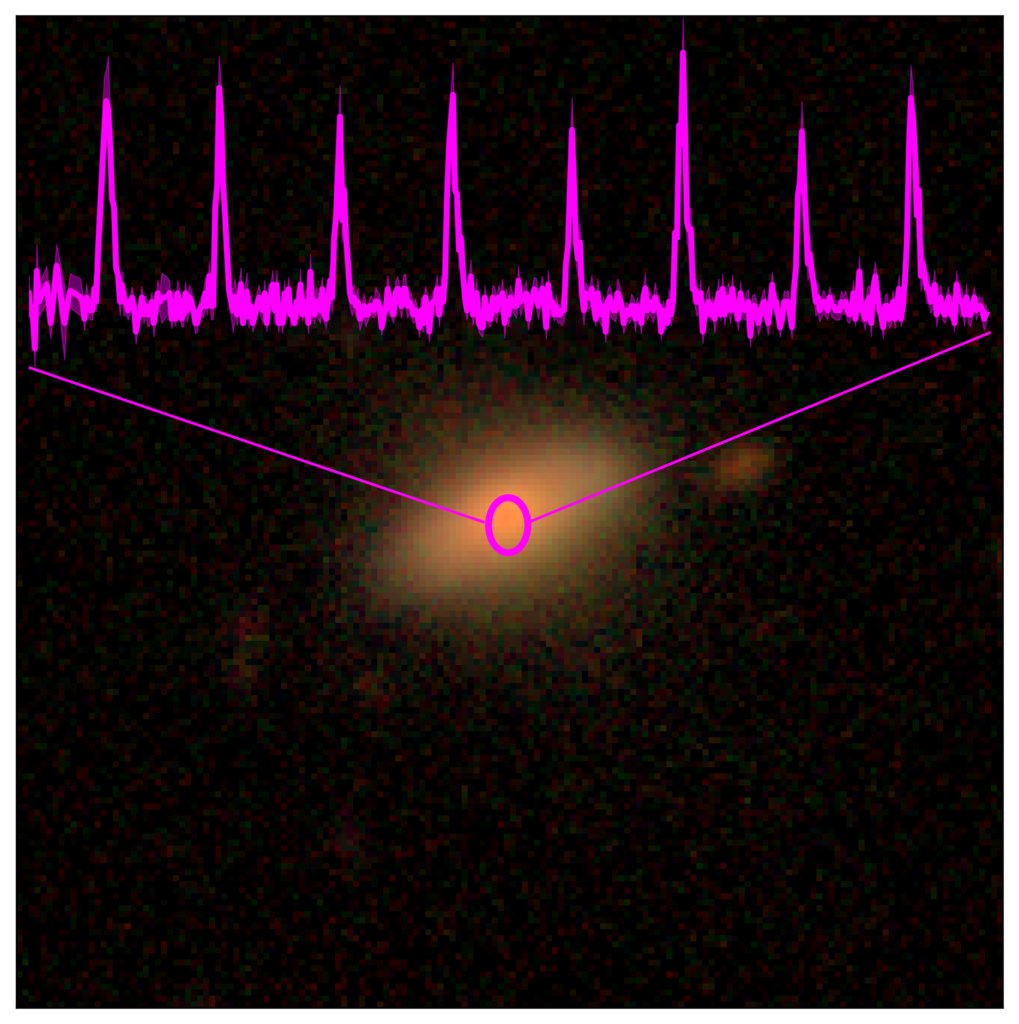 Quasars or “active galactic nuclei” (AGN) are often called the lighthouses of the distant universe. The luminosity of their central region, where a very massive black hole accretes large amounts of material, can be thousands of times higher than that of a galaxy like our Milky Way. However, unlike a lighthouse, AGN shine continuously.

“In the eROSITA all-sky survey, we have now found two previously quiescent galaxies with huge, almost periodic sharp pulses in their X-ray emission,” says Riccardo Arcodia ... These kinds of objects are fairly new: only two such sources were known before, found either serendipitously or in archival data in the past couple of years. “As this new type of erupting sources seems to be peculiar in X-rays, we decided to use eROSITA as a blind survey and immediately found two more,” he adds.

The eROSITA telescope currently scans the entire sky in X-rays and the continuous data stream is well suited to find transient events such as these eruptions. Both new sources discovered by eROSITA showed high-amplitude X-ray variability within just a few hours, which was confirmed by follow-up observations with the XMM-Newton and NICER X-ray telescopes. Contrary to the two known similar objects, the new sources found by eROSITA were not previously active galactic nuclei.

“These were normal, average low-mass galaxies with inactive black holes,” explains Andrea Merloni ... “Without these sudden, repeating X-ray eruptions we would have ignored them.” The scientists now have the chance to explore the vicinity of the smallest super-massive black holes. These have 100 000 to 10 million times the mass of our Sun. ...


X-ray Quasi-Periodic Eruptions from Two Previously Quiescent Galaxies ~ R. Arcodia et al
Know the quiet place within your heart and touch the rainbow of possibility; be
alive to the gentle breeze of communication, and please stop being such a jerk. — Garrison Keillor
Top
2 posts • Page 1 of 1