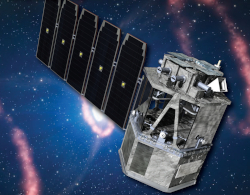 The low-energy gamma-ray region of the electromagnetic spectrum provides important information about how anti-matter is formed near the center of the Milky Way and in other sites, how stars die explosively, and how the chemistry of the Milky Way evolves as a result. Gamma-rays can only be viewed from space, since the earth's atmosphere (thankfully) blocks gamma-rays from reaching the ground, converting them to superluminal particles generating harmless flashes of blue light. Though gamma-ray studies of the Universe have been carried out for about 5 decades, the low-energy gamma-ray band is still the least explored region of the electromagnetic spectrum. This region is so difficult to explore because of especially high gamma-ray background contamination, requiring new techniques and especially sensitive technology to extract a cosmic signal from the background noise. Now a new space observatory, the Compton Spectrometer and Imager, or COSI, has been selected by NASA to explore this important region of the spectrum. COSI (pictured above) is a revolutionary telescope having especially low background and high efficiency in the soft gamma-ray band. COSI will survey the entire sky in the low-energy gamma-ray band (from 0.2-5 MeV), providing the best map of sites in the Galaxy where matter and anti-matter collide and annihilate, as well as constraining the geometry of the gamma-ray sources. COSI is led by the University of California, Berkeley and is expected to be launched in 2025.

https://en.wikipedia.org/wiki/Parental_leave wrote:
<<The United States, Suriname, Papua New Guinea, and a few island countries in the Pacific Ocean are the only countries in the United Nations that do not require employers to provide paid time off for new parents.>>

https://en.wikipedia.org/wiki/Cos%C3%AC_fan_tutte wrote:
Click to play embedded YouTube video.
<<Così fan tutte, ossia La scuola degli amanti[a] (All Women Do It, or The School for Lovers), K. 588, is an opera buffa in two acts by Wolfgang Amadeus Mozart. It was first performed on 26 January 1790 at the Burgtheater in Vienna, Austria. The libretto was written by Lorenzo Da Ponte who also wrote Le nozze di Figaro and Don Giovanni. There is evidence that Mozart's contemporary Antonio Salieri tried to set the libretto but left it unfinished. In 1994, John Rice uncovered two terzetti by Salieri in the Austrian National Library.

The short title, Così fan tutte, literally means "So do they all", using the feminine plural (tutte) to indicate women. It is usually translated into English as "Women are like that". The words are sung by the three men in act 2, scene 3, just before the finale; this melodic phrase is also quoted in the overture to the opera. Da Ponte had used the line "Così fan tutte le belle" earlier in Le nozze di Figaro (in act 1, scene 7).>>