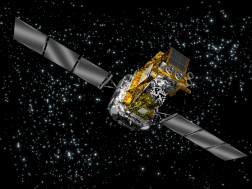 
Working in outer space is dangerous. Dramatic changes in temperature, dangerous regions high energy particles and radiation, all make for an unpleasant work environment. A prime example was the dire situation experienced by the INTernational Gamma-Ray Astrophysics Laboratory (INTEGRAL) this past September. INTEGRAL, shown above, is a key high-energy space observatory which has been studying Gamma-Ray and X-ray sources in the Milky Way and beyond since 2002. On September 22, INTEGRAL went into an emergency mode when one of its three gyroscopic reaction wheels (which help keep the spacecraft oriented in space) stopped rotating. By conservation of angular momentum, the spacecraft itself started tumbling. This meant that the spacecraft was losing power, because its solar panels, which are used to keep the spacecraft's batteries charged, were no long pointing at the sun. Uncontrolled spin can even cause a spacecraft to break apart. The problem seemed to be caused when a charged subatomic particle hit a delicate bit of INTEGRAL's electronics as INTEGRAL traversed earth's dangerous Van Allen radiation belts, regions where high energy subatomic particles are trapped by the earth's magnetic fields. With only 3 hours of power left, ESA's engineers had to work fast. Difficulties compounded since diagnostic information from the tumbling spacecraft was only received sporadically. Commands were sent to switch on the balky reaction wheel and to alter the spin speeds to brake the tumbling. At first these commands seemed to bring INTEGRAL under control, but within a few hours INTEGRAL started tumbling again. After some high-pressured analysis, ground controllers believed this new issue was produced when the earth happened to block the view of the star trackers, so that it could briefly not find stars used for guiding the spacecraft. A new set of commands were sent up to the spacecraft, and, after a few harrowing hours, the venerable spacecraft was once again under stable control. INTEGRAL has been back observing since September 27.


ESA: Three hours to save Integral