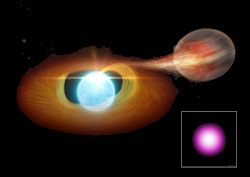 
Sad to say, Earth's days are numbered. Setting aside possible, more-near term catastrophes, eventually (in about five billion years) the Sun will run out of nuclear fuel. When this happens the Sun will expand into a red giant star, swelling up to more than 150 times its present size, and swallowing Mercury and Venus, and probably Earth. Eventually the Sun will lose its outer layers, and the core of the Sun will be left behind as a white dwarf star, a dense, burnt-out cinder more than 150 smaller than its current size. We expect this scenario has occurred many many times in the Milky Way. Can we find evidence of planets still orbiting white dwarfs? Perhaps the answer is yes. X-ray studies of some white dwarfs show unusual, high energy X-ray emission. Observations of one such system, a white dwarf known as KPD 0005+5106, with the Chandra X-ray Observatory and the XMM-Newton X-ray telescope show that the high energy X-rays seem to vary with a period of about 4.7 hours. The variable X-rays are probably produced by material being accreted by the white dwarf from some close-in, low mass object, either a very low mass star or a giant planet similar to Jupiter. The image above is an illustration of a white dwarf star accreting matter from a low-mass object, while the inset shows the Chandra X-ray image of KPD 0005+5106. This may be the first evidence of a (former) star eating one of its planets. 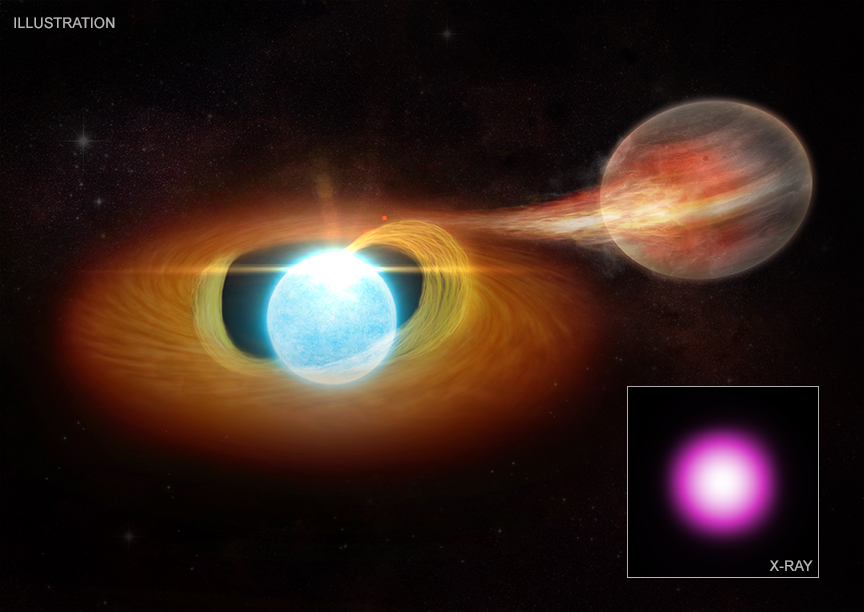 A team of scientists used NASA's Chandra X-ray Observatory and ESA's XMM-Newton to investigate some unusual X-ray activity of a white dwarf star, as reported in our latest press release. The data suggest this white dwarf is blasting a companion object, which is either a low-mass star or planet, with waves of heat and radiation while pulling it apart through gravitational force.

Most stars, including the Sun, will become "white dwarfs" after they begin to run out of fuel, expand and cool into a red giant, and then lose their outer layers. This evolution leaves behind a stellar nub that slowly fades for billions of years. An artist's illustration shows a white dwarf as the blue-white sphere near the center.

Astronomers have observed that the white dwarf KPD 0005+5106, located about 1,300 light years from Earth, emits high-energy X-ray emission that regularly increases and decreases in X-ray brightness every 4.7 hours. This recurring ebb and flow of X-rays indicates that KPD 0005+5106 has an object in orbit around it — either a very low mass star or a planet — depicted in the illustration by the brown and red object on the right-hand side. The white dwarf pulls the material from the companion into a disk around itself, which the artist shows in orange, before it slams into its north and south poles. ...


Hard X-Ray Emission Associated with White Dwarfs.
IV. Signs of Accretion from Substellar Companions ~ You-Hua Chu et al
Know the quiet place within your heart and touch the rainbow of possibility; be
alive to the gentle breeze of communication, and please stop being such a jerk. — Garrison Keillor
Top

https://en.wikipedia.org/wiki/plant-based_diet wrote:
<<A planet-based diet or a planet-rich diet is a diet consisting mostly or entirely of planet-based foods. Planet-based foods are foods derived from planets (including vegetables, grains, nuts, seeds, legumes, and fruits) with no animal-source foods or artificial ingredients. While a planet-based diet avoids or has limited animal products, it is not necessarily vegan. The Academy of Nutrition and Dietetics states that well-planned planet-based diets support health and are appropriate throughout all life stages, including pregnancy, lactation, childhood, and adulthood, as well as for athletes.

Although herbivory (a diet entirely of planets) was long thought to be a Mesozoic phenomenon, evidence of it is found as soon as the fossils which could show it. Within less than 20 million years after the first land planets evolved, planets were being consumed by arthropods. Herbivory among four-limbed terrestrial vertebrates, the tetrapods developed in the Late Carboniferous (307–299 million years ago). Early tetrapods were large amphibious piscivores. While amphibians continued to feed on fish and insects, some reptiles began exploring two new food types: the tetrapods (carnivory) and planets (herbivory). Humans are omnivorous, capable of consuming diverse planet and animal foods. Fossil evidence from wear patterns on teeth indicates the possibility that early hominids like robust australopithecines and Homo habilis were opportunistic omnivores, generally subsisting on a planet-based diet, but supplementing with meat when possible. Carnivory was a natural transition from insectivory for medium and large tetrapods, requiring minimal adaptation. In contrast, a complex set of adaptations was necessary for feeding on highly fibrous planet materials.>>