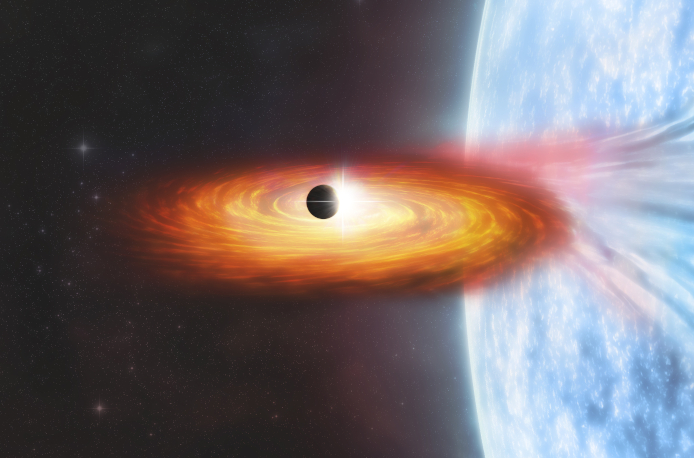 
We've now confirmed nearly 5000 planets in the Milky Way beyond our solar system. These exoplants are found through painstaking observations of tiny, periodic changes in the starlight of their host stars: the back-and-forth motion of absorption lines due to the miniscule orbital tug of the planet, or infinitesimal dips in brightness as the planet passes in front of the star. Some exoplanets are even believed to be similar to earth, perhaps even with atmospheres, perhaps supporting life. NASA's newly-launched James Webb Space Telescope, the largest space telescope yet launched, will directly search for signatures of life in promising exoplanets, once it arrives at its orbital perch (about 1 million miles behind earth along the earth-Sun line, in about a month from now). But even a giant planet like Jupiter is only about one-tenth the size of normal star, so the shadow cast by planet produces only a tiny drop in the light from the star. The situation is much different for planets that might be in orbit around an X-ray emitting neutron star or black holes, since a planet the size of Jupiter is thousands of times larger than than the X-ray emitting region around a neutron star or black hole. The image above left is an X-ray image (in purple) and optical image of the galaxy M51. The white box in the figure borders a strong x-ray source called M51-ULS-1 (where "ULS" stands for ultra-luminous X-ray source because of the extraordinary amount of X-rays coming from the object). M51-ULS-1 is an X-ray binary consisting of a neutron star or black hole accreting matter from a small, normal-type companion star. In an X-ray observation from September 20, 2012 by the Chandra X-ray Observatory, astronomers noticed that this source suddenly disappeared for about an hour. Though these kinds of X-ray binary systems can exhibit unusually large dips in X-ray brightness due to a number of reasons, the M51-ULS-1 dip seemed different from any previously seen. The scientists suggested that this dip was instead produced by the eclipse of the X-ray source in M51-ULS-1 by a small object, about the size of the planet Saturn, in orbit around the entire binary system. If confirmed, this would be the discovery of the first "extroplanet", the name the team has proposed for exoplanets in galaxies beyond the Milky Way.

Chandra Sees Evidence for Possible Planet in Another Galaxy

Signs of a planet transiting a star outside of the Milky Way galaxy may have been detected for the first time. This intriguing result, using NASA’s Chandra X-ray Observatory, opens up a new window to search for exoplanets at greater distances than ever before.

The possible exoplanet candidate is located in the spiral galaxy Messier 51 (M51), also called the Whirlpool Galaxy because of its distinctive profile. ...

This new result is based on transits, events in which the passage of a planet in front of a star blocks some of the star's light and produces a characteristic dip. Astronomers using both ground-based and space-based telescopes – like those on NASA's Kepler and TESS missions – have searched for dips in optical light, electromagnetic radiation humans can see, enabling the discovery of thousands of planets.


A possible planet candidate in an external galaxy detected through X-ray transit ~ Rosanne Di Stefano et al
Know the quiet place within your heart and touch the rainbow of possibility; be
alive to the gentle breeze of communication, and please stop being such a jerk. — Garrison Keillor
Top
2 posts • Page 1 of 1