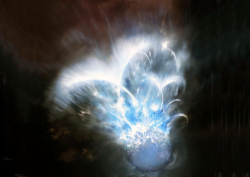 
Prior to the advent of the global positioning system, finding your way on earth used to best be accomplished using the earth's magnetic field. The earth can be thought of as a bar magnet, where motions of electrical currents in the earth's interior generate a simple dipolar magnetic field, one with a north and south pole and a magnetic axis connecting them. The earth's magnetic field is actually fairly weak though - which is a good thing. Much stronger magnets have existed at certain magnetic "hot spots", localized regions where the magnetic field can be enormously intensified. Two notable magnetic hotspots on earth have been the Massachussetts Institute of Technology (at about 42 degrees north latitude and 71 degrees west longititude), and the Los Alamos National Laboratory (at about 35 degrees north latitude and 106 degrees west longitude). At times the magnetic field at MIT has artificially become about 400,000 times the earth's average field strength, while the magnetic field strength at Los Alamos has sometimes been 2 million times stronger than earth's. Localized magnetic hotspots are fairly common among magnetized objects: on the Sun they appear as dark sunspots, from which enormous solar flares can be generated. A special type of neutron star called a magnetar is an more extreme example. Magnetars, like neutron stars, are the rotating, superdense leftover core of a collapsed star. But the magnetic fields on magnetars are the strongest in the Universe, trillions of times the strength of the magnetic field on earth (and about 1000 times stronger than the field of the typical neutron star). The magnetic fields on magnetars can form magnetic hotspots on the neutron star's surface and these hotspots can release an almost unbelievable amount of magnetic energy. On April 15, 2020, an instrument on the International Space Station called the Atmosphere-Space Interactions Monitor saw something very surprising. ASIM is designed to see short burst of high energy X-ray and gamma-ray radiation in the earth's atmosphere. But on that date, ASIM saw a burst of high-energy radiation apparently from an object in a galaxy about 10 million light-years above earth's atmosphere. This burst of energy lasted less than 0.2 seconds, but released as much energy as the Sun has in the past 100,000 years. The high-energy variability seen by ASIM also showed two high-frequency variations occurring a few thousand times each second. Scientists believe these rapid, powerful bursts could only be produced by a release of magnetic energy from the enormously powerful magnetic field of a magnetar, perhaps looking something like the illustration above. An international scientific group with outstanding Valencian participation has managed to measure for the first time oscillations in the brightness of a neutron star – magnetar – during its most violent moments. In just a tenth of a second, the magnetar released energy equivalent to that produced by the Sun in 100,000 years. The observation has been carried out automatically, without human intervention, thanks to the Artificial Intelligence of a system developed at the Image Processing Laboratory (IPL) of the University of Valencia.

Among the neutron stars, objects that can contain half a million times the mass of the Earth in a diameter of about twenty kilometers, stands out a small group with the most intense magnetic field known: magnetars. These objects, of which only thirty are known, suffer violent eruptions that are still little known due to their unexpected nature and their duration of barely tenths of a second. Detecting them is a challenge for science and technology.

An international scientific team with outstanding participation from the University of Valencia has published recently in the journal Nature the study of the eruption of a magnetar in detail: they have managed to measure oscillations – pulses – in the brightness of the magnetar during its most violent moments. These episodes are a crucial component in understanding giant magnetar eruptions. It is a question long debated during the past 20 years that today has an answer, if there are high-frequency oscillations in the magnetars. ...


Very-High-Frequency Oscillations in the Main Peak of a Magnetar Giant Flare ~ A. J. Castro-Tirado et al
Know the quiet place within your heart and touch the rainbow of possibility; be
alive to the gentle breeze of communication, and please stop being such a jerk. — Garrison Keillor
Top
2 posts • Page 1 of 1