Fast-spinning neutron stars called millisecond pulsars have about as much mass as the Sun but spin at hundreds of revolutions per second, faster than the engine of a Formula-1 racer. Their rapid spins come from the accretion of matter from a companion star; this matter forms a thin, fast spinning disk around the neutron star, impacting one side of it and increasing its spin, similar to the way you might spin up a basketball with your hand. The millisecond pulsar strips almost all the mass from its companion, so the companion star usually ends up as an extremely low-mass white dwarf (an inert, earth-sized core of degenerate matter). Because so much mass is lost from the companion star, these millisecond pulsar binary systems were first called "black widow" binaries, or, as more types of them have been found, they are more generically known now as "spider" binaries to the cognoscenti. Spider binaries emit high-energy gamma rays, and the Fermi Gamma-ray Space Telescope, scanning the gamma-ray sky since 2008, has been instrumental in finding many of them. A newly-recognized millisecond pulsar, first seen as a previously unidentified gamma-ray source by Fermi, called 4FGL J1120.0Ð2204 in the Fermi catalogue, was recently identified as an unusual spider system using ground-based observations from the SOAR Telescope in Chile. The companion star in this system is more massive than the companion stars in most other spider systems, and much larger too. This means that astronomers have caught the neutron star in this system in the act of eating its companion star, making it the earliest such system to be discovered in the process of transitioning into a spider.

NOIRLab: Cosmic 'Spider' Found to Be Source of Powerful Gamma-Rays 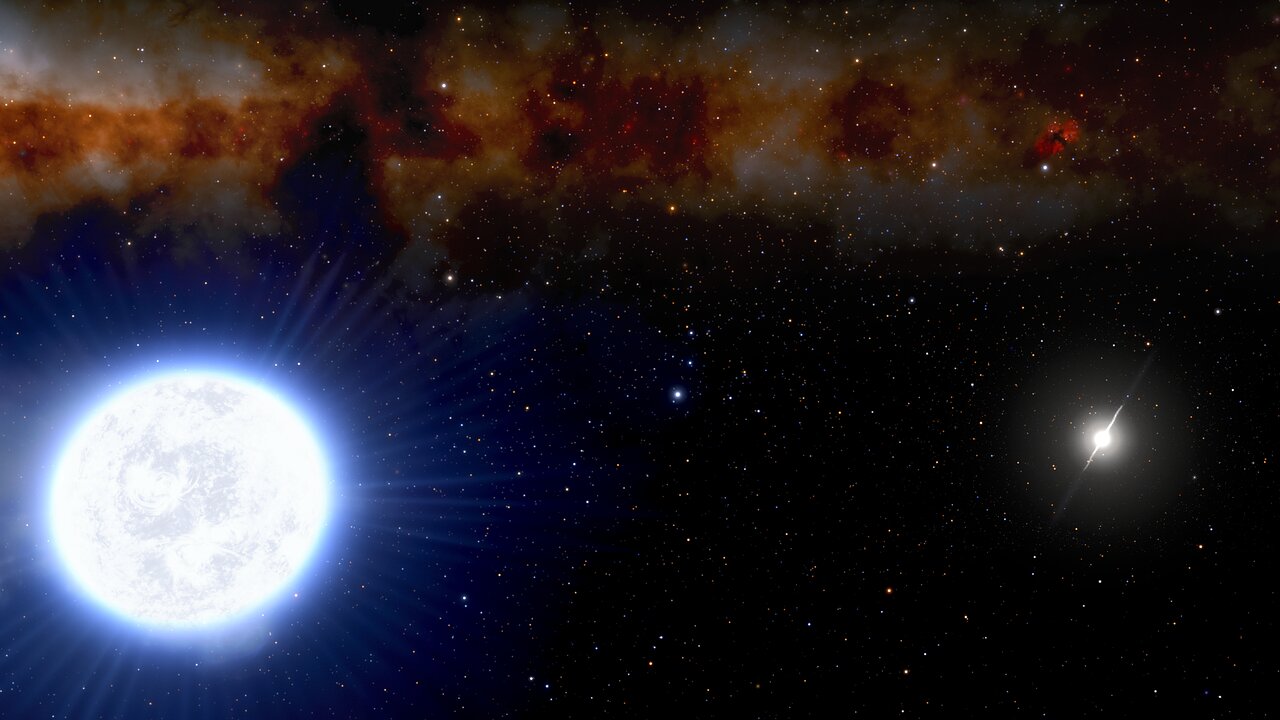 Using the 4.1-meter SOAR Telescope in Chile, astronomers have discovered the first example of a binary system where a star in the process of becoming a white dwarf is orbiting a neutron star that has just finished turning into a rapidly spinning pulsar. The pair, originally detected by the Fermi Gamma-ray Space Telescope, is a “missing link” in the evolution of such binary systems.

A bright, mysterious source of gamma rays has been found to be a rapidly spinning neutron star — dubbed a millisecond pulsar — that is orbiting a star in the process of evolving into an extremely-low-mass white dwarf. These types of binary systems are referred to by astronomers as “spiders” because the pulsar tends to “eat” the outer parts of the companion star as it turns into a white dwarf.

The duo was detected by astronomers using the 4.1-meter SOAR Telescope on Cerro Pachón in Chile, part of Cerro Tololo Inter-American Observatory (CTIO), a Program of NSF's NOIRLab.

NASA’s Fermi Gamma-ray Space Telescope has been cataloging objects in the Universe that produce copious gamma rays since its launch in 2008, but not all of the sources of gamma rays that it detects have been classified. One such source, called 4FGL J1120.0-2204 by astronomers, was the second brightest gamma-ray source in the entire sky that had gone unidentified, until now. ...


4FGL J1120.0-2204: A Unique Gamma-ray Bright Neutron Star Binary
with an Extremely Low Mass Proto-White Dwarf ~ Samuel J. Swihart et al
Know the quiet place within your heart and touch the rainbow of possibility; be
alive to the gentle breeze of communication, and please stop being such a jerk. — Garrison Keillor
Top

Female "black widows" usually exhibit an infrared millisecondglass on the ventral surface of the abdomen.

Clearly a priority opportunity target for the Webb