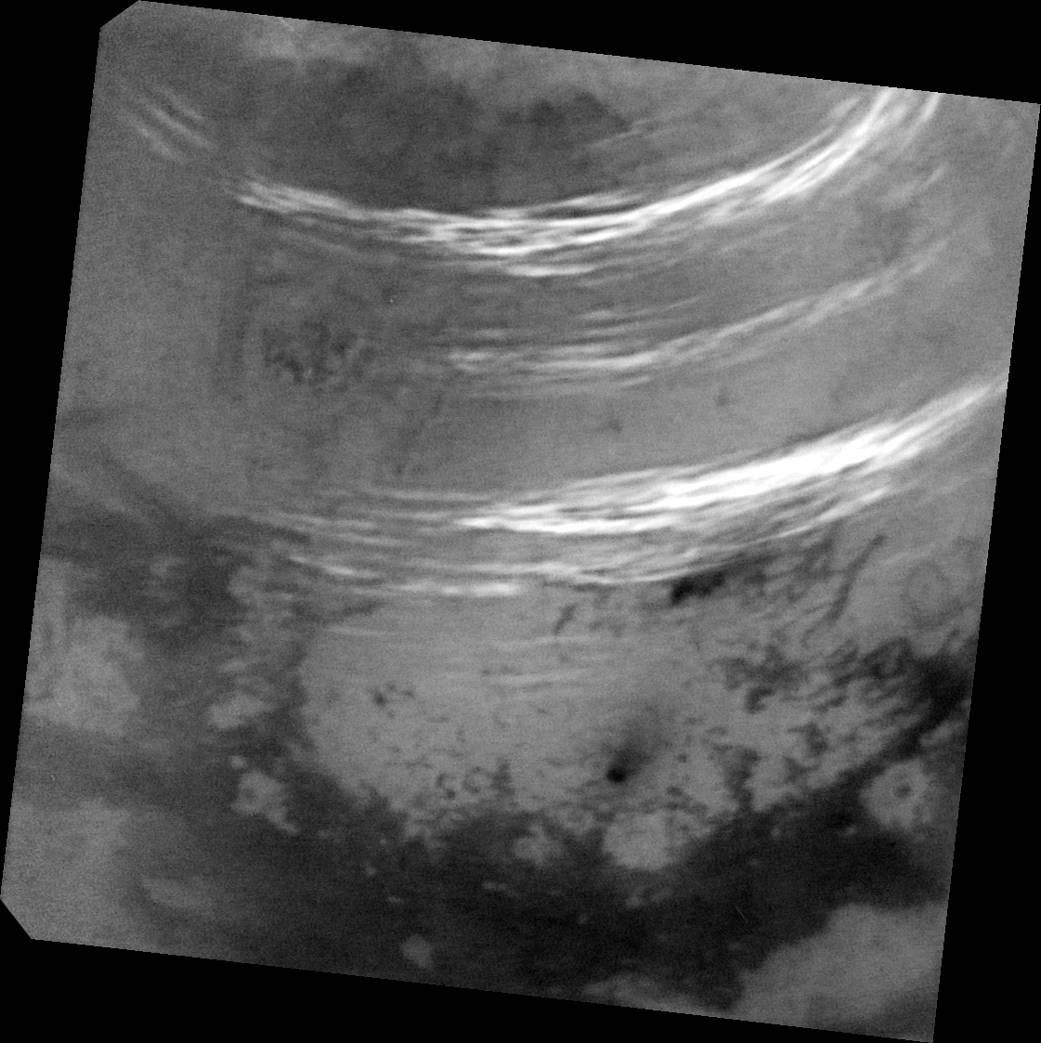 Titan's northern cloud bands. Photo: Cassini.
When I first saw this picture at Astronomy Now, with some lettering covering the lower half of the picture, I thought I was looking at an ultrasonographic image of somebody's unborn baby.

I expect that methane is "cooking" beneath the recently formed methane clouds.
Top

Ann wrote:
When I first saw this picture at Astronomy Now, with some lettering covering the lower half of the picture, I thought I was looking at an ultrasonographic image of somebody's unborn baby.

I expect that methane is "cooking" beneath the recently formed methane clouds. 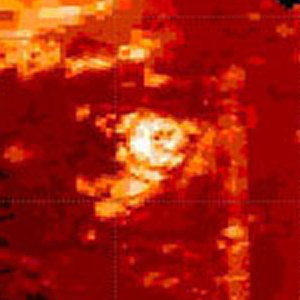 <<Scientists have long speculated that conditions on Titan resemble those of early Earth, though at a much lower temperature. The detection of argon-40 in the atmosphere in 2004 indicated that volcanoes had spawned plumes of "lava" composed of water and ammonia. Global maps of the lake distribution on Titan's surface revealed that there is not enough surface methane to account for its continued presence in its atmosphere, and thus that a significant portion must be added through volcanic processes.

Still, there is a paucity of surface features that can be unambiguously interpreted as cryovolcanoes. One of the first of such features revealed by Cassini radar observations in 2004, called Ganesa Macula, resembles the geographic features called "pancake domes" found on Venus, and was thus initially thought to be cryovolcanic in origin, until Kirk et al. refuted this hypothesis at the American Geophysical Union annual meeting in December 2008. The feature was found to be not a dome at all, but appeared to result from accidental combination of light and dark patches. In 2004 Cassini also detected an unusually bright feature (called Tortola Facula), which was interpreted as a cryovolcanic dome. No similar features have been identified as of 2010. In December 2008, astronomers announced the discovery of two transient but unusually long-lived "bright spots" in Titan's atmosphere, which appear too persistent to be explained by mere weather patterns, suggesting they were the result of extended cryovolcanic episodes.

In March 2009, structures resembling lava flows were announced in a region of Titan called Hotei Arcus, which appears to fluctuate in brightness over several months. Though many phenomena were suggested to explain this fluctuation, the lava flows were found to rise 200 meters above Titan's surface, consistent with it having been erupted from beneath the surface.

In December 2010, the Cassini mission team announced the most compelling possible cryovolcano yet found. Named Sotra Patera, it is one in a chain of at least three mountains, each between 1000 and 1500 m in height, several of which are topped by large craters. The ground around their bases appears to be overlaid by frozen lava flows.

Most of Titan's highest peaks occur near its equator in so-called "ridge belts". They are believed to be analogous to Earth's fold mountains such as the Rockies or the Himalayas, formed by the collision and buckling of tectonic plates, or to subduction zones like the Andes, where upwelling lava (or cryolava) from a melting descending plate rises to the surface. One possible mechanism for their formation is tidal forces from Saturn. Because Titan's icy mantle is less viscous than Earth's magma mantle, and because its icy bedrock is softer than Earth's granite bedrock, mountains are unlikely to reach heights as great as those on Earth. In 2016, the Cassini team announced what they believe to be the tallest mountain on Titan. Located in the Mithrim Montes range, it is 3,337 m tall.

If volcanism on Titan really exists, the hypothesis is that it is driven by energy released from the decay of radioactive elements within the mantle, as it is on Earth. Magma on Earth is made of liquid rock, which is less dense than the solid rocky crust through which it erupts. Because ice is less dense than water, Titan's watery magma would be denser than its solid icy crust. This means that cryovolcanism on Titan would require a large amount of additional energy to operate, possibly via tidal flexing from nearby Saturn. The low-pressure ice, overlaying a liquid layer of ammonium sulfate, ascends buoyantly, and the unstable system can produce dramatic plume events. Titan is resurfaced through the process by grain-sized ice and ammonium sulfate ash, which helps produce a wind-shaped landscape and sand dune features.

According to JPL, "By convention, mountains on Titan are named for mountains from Middle-earth, the fictional setting in fantasy novels by J.R.R. Tolkien." Colles (collections of hills) are named for characters from the same Tolkien works.>>

Titan's northern cloud bands. Photo: Cassini.
When I first saw this picture at Astronomy Now, with some lettering covering the lower half of the picture, I thought I was looking at an ultrasonographic image of somebody's unborn baby.

http://www.popsci.com/heres-what-methan ... could-look
I think I think, though I'm not sure if I all the thoughts I think I think, or if they come to me from .. goodness knows where.