Comments and questions about the APOD on the main view screen.
79 posts

Explanation: What's that below the Milky Way? Historic kilns. Built in the 1870s in rural Nevada, USA to process local wood into charcoal, the kilns were soon abandon due to a town fire and flooding, but remain in good condition even today. The above panorama is a digital conglomerate of five separate images taken in early June from the same location. Visible above the unusual kilns is a colorful star field, highlighted by the central band of our Milky Way Galaxy appearing along a diagonal toward the lower right. Many famous sites in our Galaxy are visible, including the Pipe Nebula and the Dark River to Antares, seen to the right of the Milky Way. The origin of the green mist on the lower left, however, is currently unexplained.

The "green mist" is airglow- ionized oxygen emitting at 5577. It is a common feature of the night, and when bright has sometimes been called the "black aurora". The airglow accounts for about half the natural night sky brightness.

Thanks for the picture and the memories it evoked. As a child==while visiting kinfolk in ARIZONA==I was pressed into service in such a kiln--without any ill effects; except, maybe the need to post on this great site about my youth. Thanx.
Top

The kilns are interesting but this image is hard on the eyes. It's not a night sky shot worthy of APOD.
Top

Agreed that this is not APOD quality... star fields are weak, and it is a poor panorama of the kilns, as well.
Top

The fact that it's most likely ionized oxygen glowing is obvious to anyone who's seen images of aurora. However, as it's in New Mexico, and not covering a significant fraction of the sky, it's not likely to actually *be* aurora. So, what is the *source* of the ionized oxygen? A large electrical substation? Piezo-electric effects from a fault line in the area?

And is it necessarily oxygen? I seem to remember that other elements and molecules have emission lines in that area.
Top

I'm going to paste my comment on this image from Friday 15 here:


Ann wrote:I love the 1876 Charcoal kilns under the Milky Way image. What a juxtapostion of cosmic majesty with the products of an intelligent and technological civilization on a non-interstellar communication level!

Imagine, 1876. Back then, it was known that the stars were far away, and the first star to have its parallax measured, 61 Cygni, had been shown by Friedrich Wilhelm Bessel to have a parallax already back in 1838. On the other hand, it was a complete mystery what made the stars shine - one belief, generally abandoned in 1876 but not really replaced with any other hypothesis, was that the stars shone by burning coal.

Who shovelled coal into the Sun to make it shine? If coal had been the energy source of the Sun, our star would have used up its energy source in 6300 years! See http://www.ucolick.org/~bolte/AY4_00/we ... nergy.html

Let's return to 1876. Back then, nobody had yet seen this famous engraving: 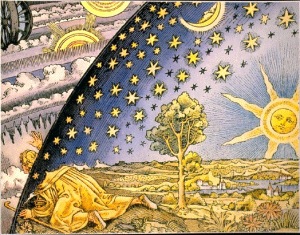 But as early as 1686, Bernard Le Bovier de Fontenelle, a French astronomer, wrote his book, Entretiens sur la Pluralité des Mondes (Conversations on the Plurality of Worlds), where he argued that the Moon was an inhabited world, full of life and hardly different at all from the Earth:


What accounts do you receive? enquired she. Those, I replied, that are given us by the learned who travel there every day by assistance of telescopes. They tell us they have discovered in the moon, earth, seas, lakes, elevated mountains, and profound abysses.

Fontenelle meditating on the plurality of worlds, painting from 1791.

Let's return to the technology of 1876. The Otto/Langen atmospheric engine existed - in fact, it was constructed in 1876:

But the four-stroke engine-powered car did not yet exist in 1876: 1876. What a year that was. And the Milky Way shone so brightly in the dark, dark non-light polluted sky, above the charcoal kilns. And the passenger pigeon was not yet extinct.

It may well be airglow. But photographically, airglow usually covers the sky more uniformly, and should be brightest above where the green shows in this image. The presence of this as a strong band near the horizon makes me think we could be seeing a photographic aurora- certainly possible at that latitude during the activity around June 4, even when facing south.
Chris

the kilns were soon abandon..

Quality of kilns is fine. Sewing together with ugly techo-babble images from hideously expensive digital telescopes is ... well ... kind of lacking. Real photos taken on the real Earth please. When I get to space someday ( right ... after all the money is magically disappearred by folks at NASA ) I can look out my cupola window and gaze back at the poor looking up at me.
Top

Jarney wrote "The fact that it's most likely ionized oxygen glowing is obvious to anyone who's seen images of aurora. However, as it's in New Mexico, and not covering a significant fraction of the sky, it's not likely to actually *be* aurora. So, what is the *source* of the ionized oxygen? A large electrical substation? Piezo-electric effects from a fault line in the area? "

One would have to know where the picture was taken to see whether there might be a terrestrial light source just below the local horizon whose light could be scattering into the line of sight. The piezoelectric stuff can probably be disregarded...
Top

noah@wise.tau.ac.il wrote:One would have to know where the picture was taken ...

Clicking on the first link in the description will give you a semi-narrowed down location: Ward Charcoal Ovens State Historic Park State Park is a Nevada state park in White Pine County, Nevada.

I usually like Milky Way pictures' but this one seems to be somewhat over lit!

There's also a strangely bright background mountain (?) on the lower left. It's nearly white! I don't have any input on the green haze but would like to offer my suggestion on the image itself, since it's an extremely simple Photoshop job. Take the photo, duplicate it, and set that duplicated layer above to multiply. Then duplicate that multiply layer again (it needs it) ... take the vibrance down a tad and you get this: Well, that was my quick and dirty edit, anyway. If it was my own work I'd probably tweak it a little more. I hope Tom doesn't mind. It's not such a bad image as the previous comments imply but I am perplexed about the brightness of it.
Just call me "geck" because "zilla" is like a last name.
Top

I'm also curious as to the origin of the green haze. I shot a sequence of images in northern Wisconsin with a fisheye lens. The haze moves across the sky from south to north. The video is fairly low quality but you get the idea of the movement.
Top

Nice adjustment, geck.
At least, I like the small image you added to your post. The enlarged image, not a fan. It's just so blurred.

The charcoal kilns are near Ely, Nevada in the Ward Charcoal Ovens State Historic Park. http://parks.nv.gov/images/wcoparkmap.jpg The ovens are oriented with the doors facing southward, east is toward the left. The snow-capped mountain could be in the Great Basin National Park. The source of the sky glow is probably Las Vegas.
Top

Depending on when and where the picture was taken in Nevada, the green mist could possibly be the Aurora Borealis. I saw a similar sight, with the same tint of green, in October 1989 about 0630 in the morning while hunting here in Utah.
Top

Thanks, geckzilla! I must admit I like your version better.
Know the quiet place within your heart and touch the rainbow of possibility; be
alive to the gentle breeze of communication, and please stop being such a jerk. — Garrison Keillor
Top

Guest wrote:The kilns are interesting but this image is hard on the eyes. It's not a night sky shot worthy of APOD.

Agreed that this is not APOD quality... star fields are weak, and it is a poor panorama of the kilns, as well.

<<The Ward Charcoal ovens were operational from 1875 until 1879 – the silver boom years of the Ward Mines. Silver ore was discovered in 1872 when freighters were looking for oxen that were grazing in the Willow Creek Basin area near Ely Nevada. At one time Ward was the largest town in White Pine County with a population of 1500. The ovens are made from quartz welded tuff that was quarried from the nearby hills. Charcoal was only made here for a few years; the silver smelters were shut down and they was no need for the charcoal.Through the years the bee hive ovens have been used as a hideout for stagecoach bandits and a shelter for stockmen and prospectors. Today the Ward Charcoal Ovens are a Nevada State Historic Park. Along with viewing the ovens visitors can enjoy camping at Willow Creek Campground, Fishing in Willow Creek, hiking or have a picnic. Tables and grills located throughout the park. The park is at an elevation of about 7,000 feet and is open year-round, however, access in the winter months may be hampered by snow and mud. Summer temperatures often reach 90 degrees, winter 40 degrees with lows often well below freezing.>>

bystander wrote:Thanks, geckzilla! I must admit I like your version better.

Thanks, Tom McEwan that's very nice. I'm surprised at the very pristine condition the kilns are in. It must have been very messy around there back in the day. Those Masons certainly knew what they were doing. Thanks too, Ann for your very informative input. Oh...and the stars were nice too.
Top

Milky Way Galaxy and Kilus.
This is a very peculiar image.
Top

Excuse me, I wrote Kilus for Kilns.
Top

Here are two milky way shots from July 3 that show a green anomaly also. These are both 3 min 45 second exposures with a Canon 7D set at ISO 2000. The shots are only resized and given a slight bump in contrast using Curves (Photoshop CS5). The green bands are roughly perpendicular to the Milky Way and you can see them move a bit from the first photo to the second (the photos are about 21 minutes apart.

I've seen this sort of thing before from this location (Apostle Islands National Lakeshore - SW Lake Superior). It's a superbly dark location. What little light pollution there is (from Bayfield and Ashland, WI) is clearly visible at the lower right of the photo. I've always attributed it to very faint aurora borealis activity (anything that's this faint on a nearly 4 minute exposure is barely there anyway) but would love to have an informed explanation.

These two photos were shot on the same night as arummel's post (above). Her fisheye shots are shorter exposures (about 30 seconds) with a Canon 30D at ISO 1600.
Top
79 posts