Explanation: Last Thursday the view toward sunset from the 2.5 kilometer summit of Cerro Las Campanas in the remote Chilean Andes was amazing. Bright but fading Mercury stood very close to a two day old Moon. Both a sunlit lunar crescent and earthlit lunar nightside are captured with the fleeting innermost planet in this breathtaking mountainscape. Even below the conjunction of Moon and Mercury, a close pairing of brilliant Venus and bright star Regulus hangs in the sky, still above the colorful western horizon. Of course amazing skies above Las Campanas are not unexpected. The region is currently home to the twin Magellan telescopes of the Las Campanas Observatory and the summit location is the site of the future Giant Magellan Telescope.

So cool... at my new residence, I will not have the luxury of seeing the horizon... trees and a hill in every direction....me sad...

That's an incredibly beautiful picture. The colors are stunning, the expanse of sky above the mountains is fantastic, and the conjunction looks wonderful. It would have been different in "real life", where the Moon would have looked like a slim crescent, and the Earth-shine would not have been as brilliantly obvious. As for colors, I note that Regulus looks faintly blue.

What are the two faint stars near the Moon, one below it and one to the upper left of it?

I figure the picture was taken about 7:15 pm local standard time (UT-4), approximately one hour after sunset. Besides the benefits of being on a remote mountain, the ecliptic is now almost vertical after sunset at that southern hemisphere location, so currently, most of the solar elongation of Mercury, Venus and the Moon translates into altitude. Where I am at 40°N latitude, the ecliptic is now at a mere 30° angle to the horizon, so those three objects are currently moving more sideways than vertical as they elongate from the sun. Venus and Mercury in particular are only slowly climbing out of the brighter twilight for me.

For their current elongations, I've been following Venus since I first spotted it with binoculars on 25-June-2016 and Mercury since 11-July-2016. Venus has become a non-difficult object for unaided eyes only in the past week or so. Mercury is still difficult to glimpse with unaided eyes (because of the minimal contrast with the background twilight -- and clouds along the horizon seem to be a plague this summer too). Of course, I need to travel a few miles from my home to a site with a suitably low horizon.

Constellation Leo, the Lion. The star to the lower left of Regulus,
which has been marked with a purple line, is Rho Leonis. Photo: Naoyuki Kurita.
Because I'm a lover of intrinsically bright blue stars, Rho Leonis is a particular favorite of mine. Despite being very distant - the Hipparcos parallax places it at around 5,000 light-years away or so - Rho Leonis shines with a blue-white light in our skies, with a B-V index of ≈ −0.15. If Rho Leonis, apparent magnitude ≈ 3.84, really is as distant as the Hipparcos parallax suggests, then it emits as much visual light as almost ≈ 70,000 star like the Sun.

But because Rho Leonis is an early B-type star, with a spectral class of either B1 or B0, it emits most of its light at ultraviolet wavelengths. According to Wikipedia, Rho Leonis' bolometric (total) luminosity is equal to about 295,000 solar luminosities, so that it is emitting more energy across the electromagnetic spectrum than well over a quarter million stars like the Sun would be able to do! Rho Leonis is a whopper of a star indeed! 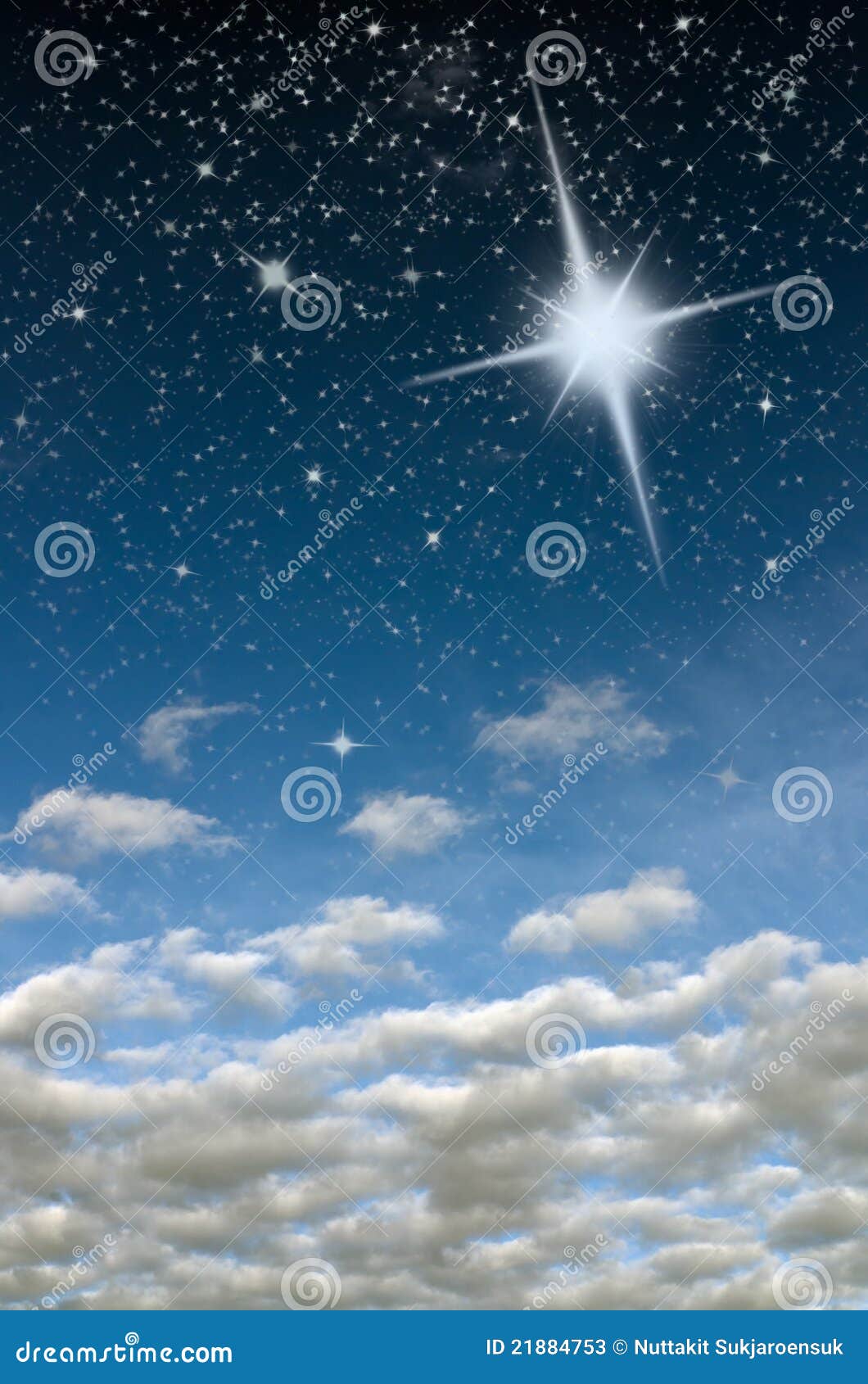 [c]Shine on, shine on, bright star![/c]
Nevertheless, if we assume, for now, that the Hipparcos parallaxes are correct, what are the intrinsically brightest naked eye stars that can be seen from around my own latitude at 55°36'N? (Okay, Oslo is close enough to Malmö and I have a world map centered on it.) A lot of the most "famous names" stars don't qualify. No, Deneb, 54,000 Suns, is not as intrinsically bright as Rho Leonis. Sadr, 60,000 Suns and Deneb's "neighbour", doesn't qualify either. Betelgeuse, at best perhaps 105,000 Suns, doesn't make the cut. Rigel, 85,000 Suns, doesn't either.

Another at least moderately well-known star is P Cygni. P Cygni is a Luminous Blue Variable, an LBV, so it goes without saying that it should be bright. Its luminosity is 610,000 Suns according to Wikipedia.

A star that is extremely famous not for its name but because of its position in the sky is Alnilam, the middle star in Orion's Belt. Alnilam is 275,000 to 537,000 times as luminous as the Sun according to Wikipedia.

So what about Rho Leonis again? I could only find this over-blue picture of it, plus a horrible yellow-orange one. This star is a well-kept secret! Its luminosity is 165,000 Suns said Jim Kaler; 295,000 Suns, according to Wikipedia.

Okay. I forgot. Rho Cas. Yellow hypergiant. Luminosity ~500,000 solar, according to Wikipedia. Classified by Bright Star Catalog as spectral class G20e. G20e as in G2 with emission lines, luminosity class 0. Not even G2Ia will do. Now we're talking brightness. This stellar monstrosity isn't the slightest bit blue, and it isn't even red. I can't keep track of the yellow ones, sorry.

Back when I scrutinized star catalogs like I was panning for stellar gold, except I was of course sifting through the catalog entries for stars as blue as sapphires, I came across a few spectral class G stars of luminosity class 0. Monstrosities they are, but small compared to the real big bully red monster stars. Don't ask me to find the yellow ones for you. In the highly unlikely event that anyone who regularly (or infrequently) visits this site would really love to find the yellow monster stars, I'm sorry to say you will have to find them on your own. But maybe this page will help you. NGC 457, the Owl Cluster, with Phi Cas. Photo: Hunter Wilson.
Yep, here's another yellow one that almost got away. Phi Cas, spectral class F0Ia. The big yellow eye of the Owl Cluster. According to Jim Kaler, Phi Cas is probably a foreground object in the line of sight of NGC 457. The distance to Phi Cas, according to Kaler, is probably around 4,500 light-years, and the luminosity of the star is about 70,000 Suns.

As is usually the case on Earth, almost all of the light is sunlight. But for this image, I find it kind of fun to think about it. The clouds, the blue sky, the light on the landscape (except for the city lights, which I think I see), and certainly the orange sunset itself, are all coming from that source, even though it is (assuming Joe is correct) an hour after sunset. In addition, the light which illuminates and allows us to see the Moon, Venus and Mercury is all sunlight. Even the Earth-lit portion of the Moon is sunlight.

Anyway, it is a very opportune and beautifully captured scene.
Mark Goldfain
Top

It's a terrific picture

I'm wondering if the line of wispy 'clouds' on each side of the Moon was just coincidentally there or is the line an image artefact caused by perhaps light from the just set Sun? They do appear to be wispy clouds but it is odd there seems to be no other so obvious clouds in the image.
Top

I forgot another intrinsically brilliantly bright star that is visible to the naked eye in the northern sky. Epsilon Aurigae! The nature of the Epsilon Aurigae system has always been unclear. It has long been known to consist of at least two components which undergo periodic eclipses with an unusual flat-bottomed dimming every 27 years. Early explanations with exceptionally large diffuse stars, black holes, and odd doughnut-shaped discs are no longer accepted. There are now two main explanations[4] that can account for the known observed characteristics: a high mass model where the primary is a yellow supergiant of around 15 M☉; and a low mass model where the primary is about 2 M☉ and a less luminous evolved star...

The low mass model, recently popularised by the Citizen Sky project, proposes that the primary is an evolved asymptotic giant branch star of 2–4 M☉. This relies on distance and luminosity estimates lower than most observations. The star would be an unusually large and bright giant star for the given mass, possibly as the result of very high mass loss. To match the observed eclipse and orbital data, the secondary is a fairly normal B main sequence star of about 6 M☉ embedded in a thick disc seen nearly edge on.

The orbit itself is now fairly well determined,[2] inclined at over 87 degrees to Earth. The primary and the disk are nearly thirty AU apart,[15] (in the high mass model) which is approximately the distance of the planet Neptune from the Sun. 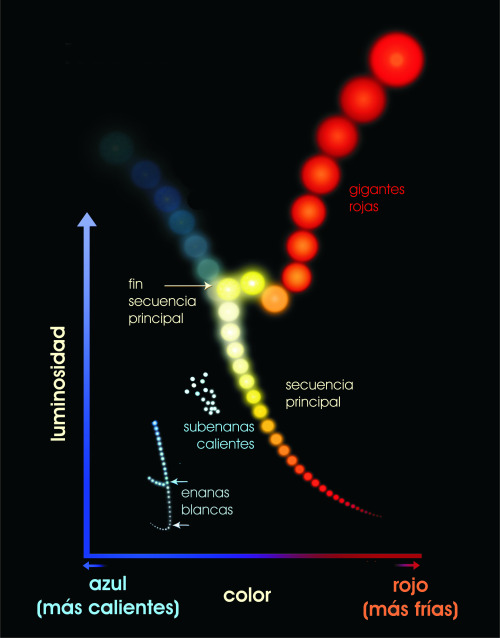 Source: http://maxisama.tumblr.com/post/1343632 ... -calientes
Amazing! If Epsilon Aurigae is a post-asymptotic giant branch star of 2-4 M☉, then it used to be a very bright, very large and quite red red giant.

I'm sorry to post a Spanish-language illustration, but I needed a picture of an impressive red giant, and the color-magnitude diagram at right does it for me. But what this diagram doesn't show is that intermediate-mass stars become red giants twice, and the second time over they become just a little brighter and redder than before. What happens in between is that the stars that reach the tip of the red giant branch undergo a so-called helium flash, after which they shrink and become bluer and enter the so-called horizontal branch. But after some time they swell in size and become red again, entering the Asymptotic Giant Branch (the AGB). You can see an annotated illustration of the different branches here.

As the swollen stars reach the tip of the AGB, so that they can't get any brighter or redder, it's anybody's guess what happens to them after that - or at least, I used to think that they started turning into planetary nebulas and white dwarfs at that point.

The visible component, Epsilon Aurigae A, is a semiregular pulsating post-asymptotic giant branch star belonging to the spectral class F0.[11] This F-type star has around 135 to 190 times the diameter of the Sun, and is 70,000 to 80,000[citation needed] times as luminous. (Reliable sources vary considerably in their estimates of both quantities.)

Utterly amazing! My software suggests 22,000 ± 37,000 the luminosity of the Sun for Epsilon Aurigae, but whatever... even 22,000 times as luminous as the Sun is pretty incredible for a star no more massive than 2-4 times the mass of the Sun. Yes, I know that there is a time in heavily mass-losing stars when they are much, much brighter than their shrinking mass would seem to allow them to be. But still...!

Or maybe Epsilon Aurigae is a high-mass star after all, at perhaps 15 times the mass of the Sun. Well, whatever... this is an incredible star, indeed. And it is being partly eclipsed by something pretty mysterious, hidden inside whopping thick disk, every 27th years, too. Wow.