Explanation: Found among the rich starfields of the Milky Way, star cluster NGC 7789 lies about 8,000 light-years away toward the constellation Cassiopeia. A late 18th century deep sky discovery of astronomer Caroline Lucretia Herschel, the cluster is also known as Caroline's Rose. Its flowery visual appearance in small telescopes is created by the cluster's nestled complex of stars and voids. Now estimated to be 1.6 billion years young, the galactic or open cluster of stars also shows its age. All the stars in the cluster were likely born at the same time, but the brighter and more massive ones have more rapidly exhausted the hydrogen fuel in their cores. These have evolved from main sequence stars like the Sun into the many red giant stars shown with a yellowish cast in this lovely color composite. Using measured color and brightness, astronomers can model the mass and hence the age of the cluster stars just starting to "turn off" the main sequence and become red giants. Over 50 light-years across, Caroline's Rose spans about half a degree (the angular size of the Moon) near the center of the wide-field telescopic image.

NGC 7789 seems like a cross between a typical open cluster and a globular cluster. Wouldn't many open clusters have totally dispersed after 1.6 billion years?

I agree with you. NGC 7789 looks quite rich. Of course, it can't be compared with a true globular cluster. For one thing, it appears to be metal-rich due to the way the red giants seem to dominate the cluster. In my opinion, true globulars rarely look quite like that. 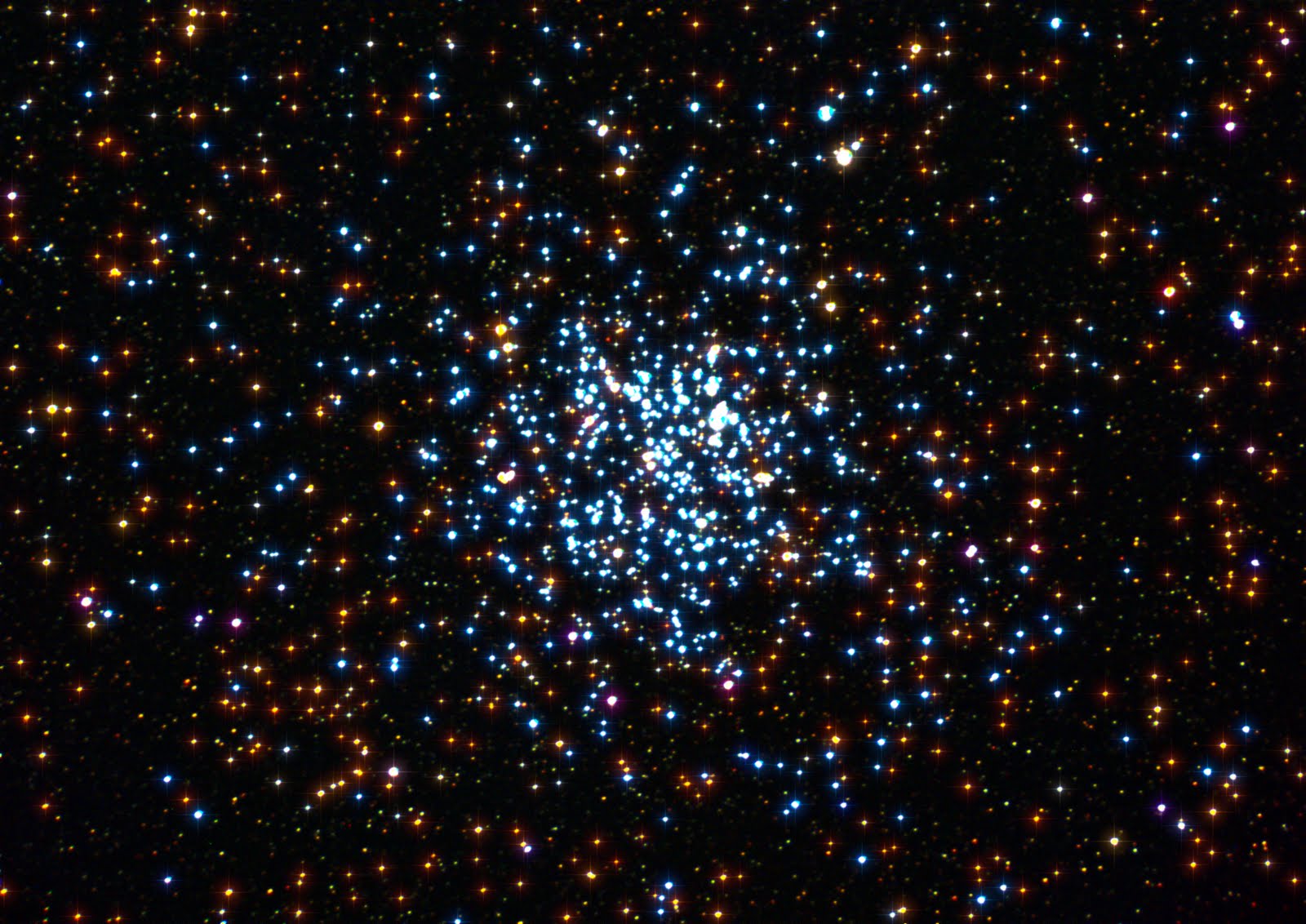 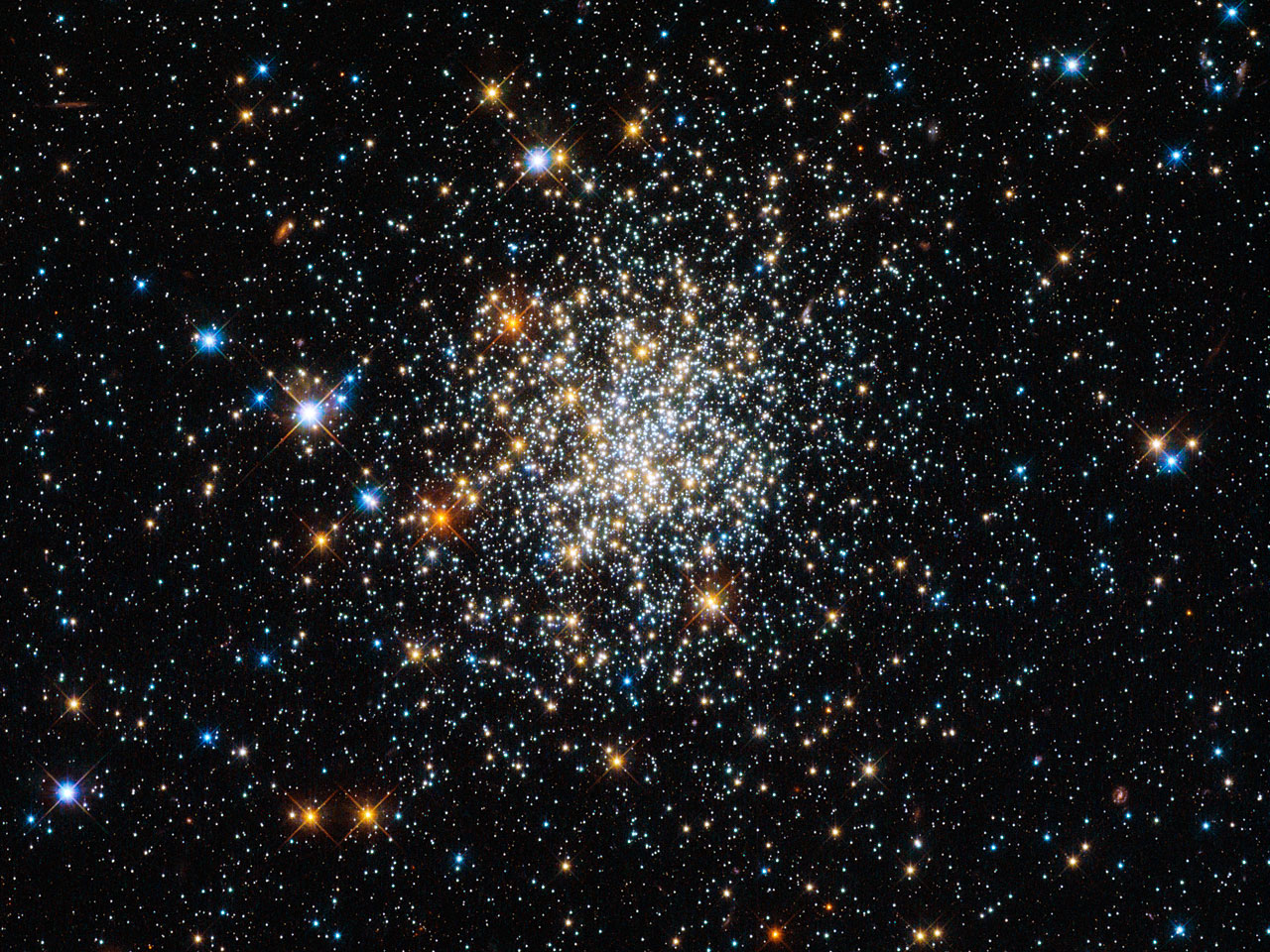 It is interesting to compare NGC 7789 with the Wild Duck Cluster, M11. M11 is estimated to be 220 million years old, so it still has a lot of bright blue stars left.

But it is even more interesting to compare Caroline's Cluster with NGC 411 in the Small Magellanic Cloud. Like NGC 7789, NGC 411 appears to be dominated by red giants. NGC 411 is estimated to be about the same age as Caroline's Cluster, too - about a billion years. 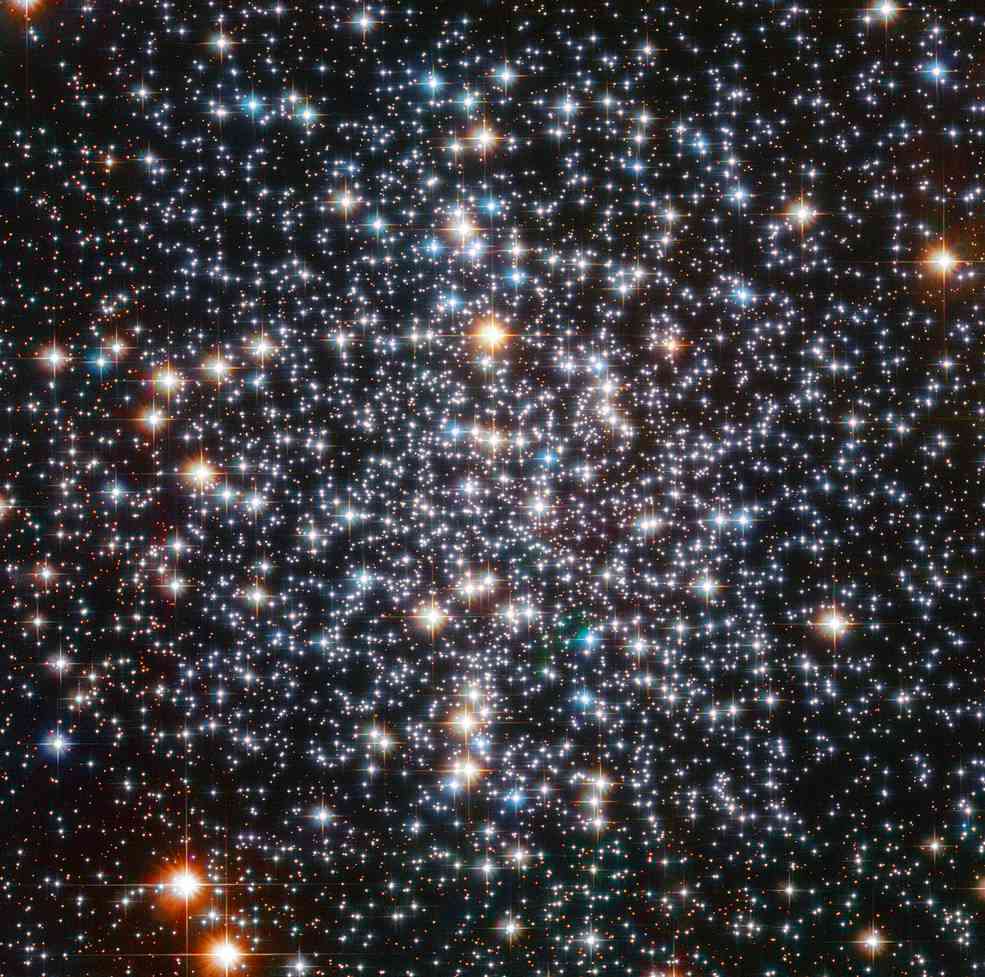 True globular cluster M4.
Source: https://en.wikipedia.org/wiki/Messier_4 ... ikiSky.jpg
Maybe it's just me, but I think that the true globulars, like M4 at left, somehow look different and less dominated by red stars.

Of course the apparent dominance of red giants in a cluster is clearly dependent on the overall color balance of the picture. Take a look at two pictures of old open cluster M67, which is at least twice as old as Caroline's Cluster, and which may be as old as the Sun: And check out this page for a huge number of great pictures of and facts about M67!

By the way, check out the Wikipedia entry about M67, where it says:

Yes, open clusters do lose mass over time, don't they? They have to be born very massive to survive for more than a billion years, let alone for 3-5 billion years.

I also recommend this post, made by me, when Caroline's Cluster got another APOD. In that APOD, NGC 7789 looked bluer than it does in today's APOD.

I love all the other APOD'er images as well...

Slightly above photograph center is a long line of stars that extend from left to right. Is there an explanation for this or are the space alien overlords trying to tell us something?
Top

Also a special prize for Ann, a cluster of clusters in Cassiopeia.
Top

hannidan123 wrote:Slightly above photograph center is a long line of stars that extend from left to right. Is there an explanation for this or are the space alien overlords trying to tell us something?

It's trying to tell you that your brain is desperate to find patterns in randomness, and will find them even when they have no physical meaning.
Chris

BDanielMayfield wrote:NGC 7789 seems like a cross between a typical open cluster and a globular cluster. Wouldn't many open clusters have totally dispersed after 1.6 billion years?

I would suggest that what distinguishes open clusters and globular clusters isn't their shape or number of stars, but the processes that created them. A very old globular cluster, near the end of its existence, will appear visually similar to many open clusters, and a very dense open cluster may share the visual appearance of a small globular. From that viewpoint, there can't be a "cross" between the two, except morphologically.
Chris

starsurfer wrote:This is one of my favourite open clusters! Caroline Herschel also discovered another of my favourites, NGC 225 better known as the Sailboat Cluster.

Also a special prize for Ann, a cluster of clusters in Cassiopeia.

Well, if we are in Cassiopeia, then NGC 663 is one of the obvious candidates. That one might be the bright clusters with a pair of red stars to the left of it. Then there is NGC 654 with a yellow and a blue star in it, and NGC 659. The very orange cluster might be IC 166.

Can't see any others!