the images from 5/17 & 18/21 each display a beautiful galaxy / cluster (?) with deep field views. in the explanations, both reference the many other 'well defined' galaxies visible throughout the image. what are the other points of light, looking like stars, that fill the frame? are they galaxies so distant they are simply points of light? are they bright new stars or solar systems like our own, or totally unknown. i figured this was a good place to ask.
Top

lrgmbr1151 wrote: ↑
Mon May 17, 2021 2:29 pm
the images from 5/17 & 18/21 each display a beautiful galaxy / cluster (?) with deep field views. in the explanations, both reference the many other 'well defined' galaxies visible throughout the image. what are the other points of light, looking like stars, that fill the frame? are they galaxies so distant they are simply points of light? are they bright new stars or solar systems like our own, or totally unknown. i figured this was a good place to ask.

Most of the truly point-like objects are stars which are in our own galaxy, very close to us in comparison with the distant galaxies. The galaxies can be identified by their shape, by their intensity profile, by their color... or with practice, some combination of these things.
Chris 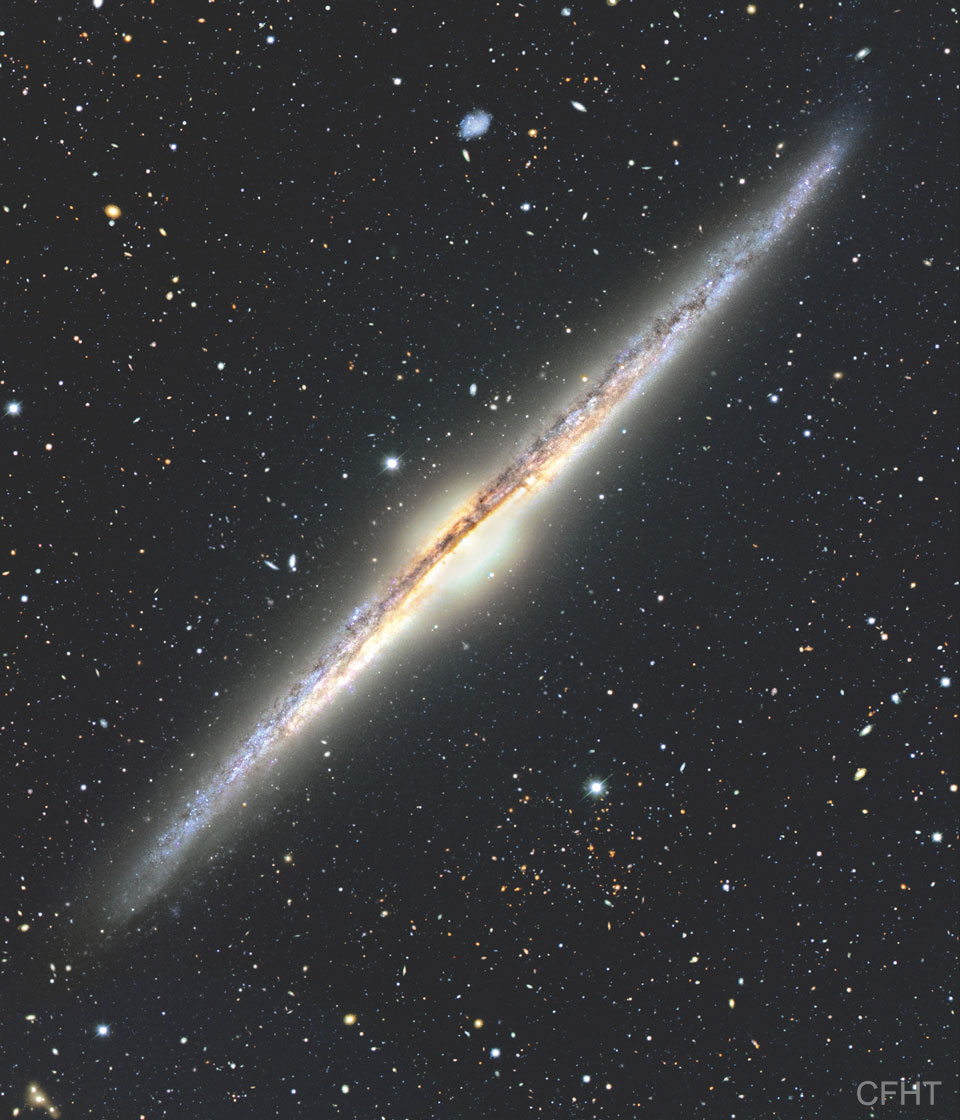 When it comes to NGC 4565, most of the small round lights in the background sky are likely to be galaxies, not nearby stars. That is because galaxy NGC 4565 is located in Coma Berenices, which is a constellation where our galaxy is "thin" and contains few stars and little gas and dust to block or interfere with our view of galaxies beyond our own.

Note the large patch below NGC 4565 itself that I have outlined in orange. Inside this outline you find a large number of small orange objects. They are a distant cluster of galaxies. They are relatively close together because they belong to the same cluster, and they are very orange because they are so far away that their color has been quite strongly affected by "redshift-reddening". This is an effect of the fact that our Universe is expanding. As the Universe expands, the light from distant galaxies gets "stretched" by this expansion, so that the wavelengths of this light get longer. But longer wavelengths means redder light. The farther away a galaxy is, the more its light is affected by redshift-reddening.

At the "edge" of the highly reddened group of galaxies is a star. It is bluish, or at least it looks bluish in this picture, and I have outlined it with an "S". The star has visible diffraction spikes - individual "spikes" of light caused by reflections in the telescope (or possibly camera) that was used to create this image. Galaxies too make diffraction spikes, but very faint ones. Point sources like stars have much more obvious diffraction spikes.

To the right of the distant and highly reddened cluster of galaxies is what appears to be another group of galaxies. They are not so far away - although they, too, are certainly far away - and I have outlined this galaxy group in pale yellow.

I have used color to to say something about the apparent color of the objects in the APOD. That is why I used a blue pen to highlight the blue galaxy at top. This is a starforming galaxy, rich in young blue stars. At bottom left, there is a group of interacting galaxies whose "G" I colored orange. I should have used a yellow pen for them instead, because they are not nearly as reddened as the highly reddened galaxy group below center. As for the group of galaxies at bottom left, they look like elliptical or lenticular galaxies to me. That is to say that they are intrinsically yellow, because they seem to lack star formation.

I had to look long and hard before I could spot a yellow or an orange star in this APOD. I finally found one, or rather two, hugging the dust lane and thick disk of NGC 4565 at upper right. You can see the orange "S" at upper right. In my opinion, this image - the APOD, that is - has been processed so that it is "a bit heavy on the blue side", perhaps in order to increase the contrast between the majestic foreground galaxy and the more or less reddened background galaxies. What this means, I think, is that non-blue foreground stars in the APOD look more bluish than they really are. Because it seems to me that all the other more or less round and yellow objects in the APOD are probably galaxies, although I may be wrong about that. 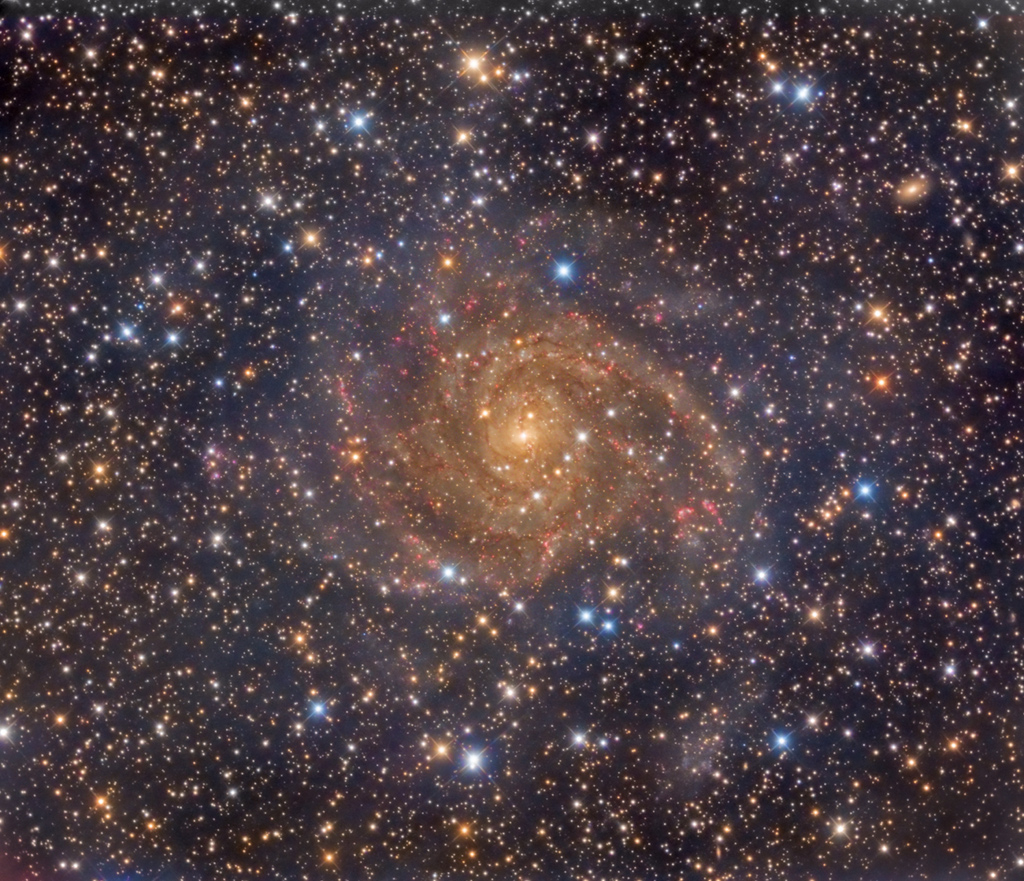 
As I said, galaxy NGC 4565 is located in a "thin" part of the sky, where there are few foreground Milky Way stars to obstruct our view of the galaxies beyond. But not all parts of the sky are like that. In some parts the Milky Way is "thick" and full of foreground stars, as well as gas and dust. Constellation Cassiopeia is one of those parts of the sky.

In the picture above you can see galaxy IC 342 in Cassiopeia, hidden behind a virtual curtain of foreground stars. I didn't spend a lot of time scrutinizing the objects surrounding it, but I was only able to spot two obvious galaxies, both at upper right.

So you have to consider the location of a galaxy in the sky when you ask yourself if you are seeing foreground stars or background galaxies surrounding it.

Ann
You do not have the required permissions to view the files attached to this post.
Color Commentator
Top
4 posts • Page 1 of 1