The Dark Tower in Scorpius

Explanation: In silhouette against a crowded star field along the tail of the arachnalogical constellation Scorpius, this dusty cosmic cloud evokes for some the image of an ominous dark tower. In fact, clumps of dust and molecular gas collapsing to form stars may well lurk within the dark nebula, a structure that spans almost 40 light-years across this gorgeous telescopic portrait. Known as a cometary globule, the swept-back cloud, is shaped by intense ultraviolet radiation from the OB association of very hot stars in NGC 6231, off the upper edge of the scene. That energetic ultraviolet light also powers the globule's bordering reddish glow of hydrogen gas. Hot stars embedded in the dust can be seen as bluish reflection nebulae. This dark tower, NGC 6231, and associated nebulae are about 5,000 light-years away.

Dark_Tower_MPRS_1100c.jpg
There are a lot of strange things in the Universe;
and this has been one of them!

Are stars in front of the black tower; or can you see
through it? My guess is they are in front of it!
You do not have the required permissions to view the files attached to this post.
Orin

The Dark Tower in Scorpius fragment.jpg
My guess is that red dwarfs' coat is partly covering the black tower,
but then the outer layer of tower is not all cold and black;
there are a few blue giants just under the skin shining through and making blue coronas
You do not have the required permissions to view the files attached to this post.
Top

https://en.wikipedia.org/wiki/Childe_Roland_to_the_Dark_Tower_Came wrote:
<<"Childe Roland to the Dark Tower Came" is a narrative poem by English author Robert Browning, written on January 2, 1852. The poem is often noted for its dark and atmospheric imagery, inversion of classical tropes, and use of unreliable narration. Childe Roland, the only speaker in the poem, describes his journey towards "the Dark Tower," and his horror at what he sees on his quest. The poem ends when Roland finally reaches the tower, leaving his ultimate fate ambiguous. The title, "Childe Roland to the Dark Tower Came", which forms the last words of the poem, is a line from William Shakespeare's play King Lear (ca. 1607). In the play, Gloucester's son, Edgar, lends credence to his disguise as Tom o' Bedlam by talking nonsense, of which this is a part:
A "Childe" in this context is the eldest son of a nobleman who has not yet attained knighthood, or who has not yet "won his spurs." It has been proposed that Browning also took inspiration from the 11th-century epic poem The Song of Roland, which features Roland, Charlemagne's loyal paladin, blowing his hunting horn (as Childe Roland also does at the end of the poem) to call for help before he dies. Browning claimed that the poem came to him in a dream, saying "I was conscious of no allegorical intention of writing it ... Childe Roland came upon me as a kind of dream. I had to write it then and there, and I finished it the same day, I believe. I do not know what I meant beyond that, and I do not know now. But I am very fond of it."

The poem opens with Roland's suspicion about the truthfulness of a "hoary" crippled man with "malicious eye", whose advice he nevertheless follows by choosing a fork in the road that leads to the Dark Tower. The gloomy, cynical Roland describes how he had been searching for the tower for so long that he could barely feel any joy at finally finding the road to it, just a grim hope "that some end might be". Roland describes himself as being like "a sick man very near to death" whose friends have all abandoned him, as Roland had always been dismissed as a member of "The Band"—a group of knights searching for the Dark Tower, all of whom had failed in their quest. Despite that, all Roland wants is to join The Band, whatever the cost.

As soon as he steps into the path towards the Dark Tower, the landscape around him shifts, and Roland finds himself completely alone in a featureless wasteland. Wandering onwards, he describes the desolate conditions with increasing despair, until he finds the emaciated body of a horse. Roland is disgusted by its appearance, saying "I never saw a brute I hated so; / He must be wicked to deserve such pain." 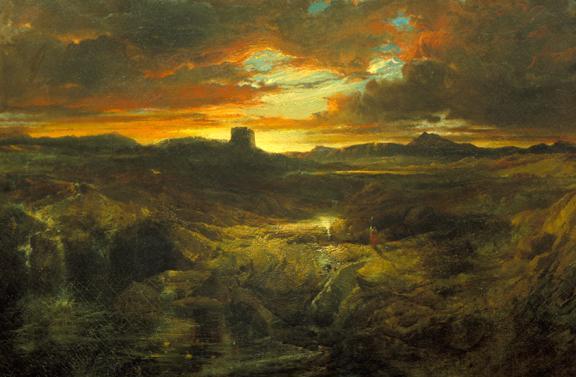 Childe Roland to the Dark Tower Came painted by Thomas Moran in 1859.

In an attempt to regain some semblance of strength after the trauma of his surroundings, Roland tries to remember happier times, and thinks back on his old friends. The memory of his friends and fellow knights Cuthbert and Giles bring him comfort, but he then remembers the downfall of each of them (Cuthbert by "one night's disgrace," and Giles by being hanged and declared a traitor by his friends), and his heart is shattered all over again. Declaring "better this present than a past like that," Roland finds the energy to keep on moving. He reaches a river which he fords with trepidation, half-convinced that he's stepping on dead bodies floating under the water. Reaching the other bank, Roland is disturbed once more by the apocalyptic landscape, envisioning some dreadful battle that must have happened to create the scene of devastation he observes. Eventually the plain gives way to mountains, and Roland finds himself stuck, unable to find a clear path forward.

Suddenly, Roland realizes that the mountain he's been looking at is the very one that hides the Dark Tower. The sunset sets the scene ablaze at that very moment, and a strange sound fills the air. "n a sheet of flame" Roland sees the faces of his dead friends, and hears their names whispered in his ears. Remembering their lives, Roland finds himself surrounded by a "living frame" of old friends. Filled with inspiration, he pulls out his "slug-horn", and blows, shouting "Childe Roland to the dark tower came". At this, the poem ends, leaving what lies inside of the Dark Tower a mystery.>>

https://en.wikipedia.org/wiki/Childe_Roland_to_the_Dark_Tower_Came wrote:
<<"Childe Roland to the Dark Tower Came" is a narrative poem by English author Robert Browning, written on January 2, 1852. The poem is often noted for its dark and atmospheric imagery, inversion of classical tropes, and use of unreliable narration. ...
>>

What in the midst lay but the Tower itself?
The round squat turret, blind as the fool's heart,
Built of brown stone, without a counter-part
In the whole world. The tempest's mocking elf
Points to the shipman thus the unseen shelf
He strikes on, only when the timbers start.

I have been remiss in my duties, and I'll try to make amends! 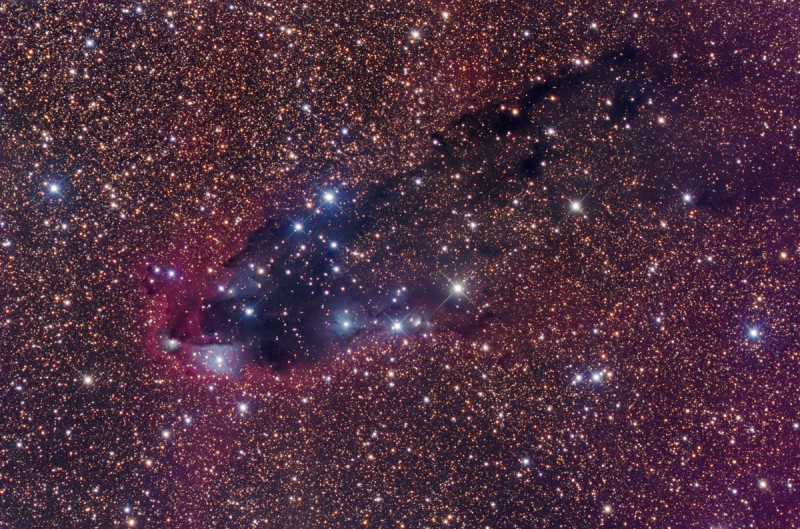 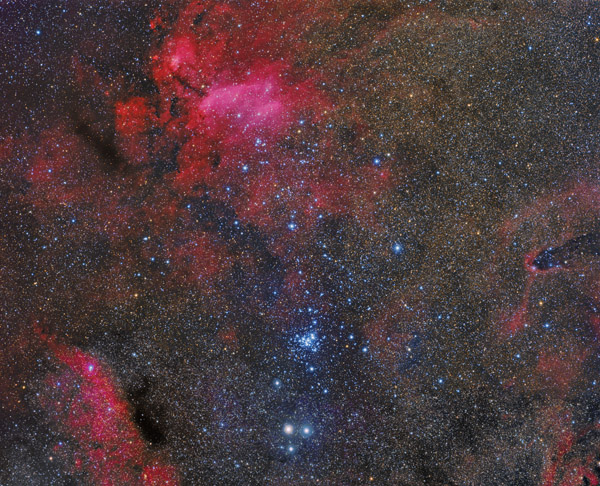 
What sculpts the Dark Tower? In the picture at left, you can see how the brilliant cluster NGC 6231, full of O- and B-type stars, affects its surroundings by ionizing hydrogen and pushing away dust. In the case of the Dark Tower, it has a red outline because it is being ionized from outside by NGC 6231, but it is "dark inside" because of the remaining concentrations of dust.

In Rob Gendler's picture, you can see that the Dark Tower is "thin in places", and we can easily see background stars through much of it. But the "head" of the Dark Tower seems more substantial, and here there is also a greater than average concentration of stars. You can clearly see that some of the stars are surrounded by reflection nebulas, which to me is proof that they are intimately connected with the Dark Tower.

So my guess is that some of these stars may have been born in the Dark Tower. Bear in mind, though, that star formation is typically an energetic process, and we see no signs of strong forces in the Dark Tower. So the sound and fury of the actual star birth is a thing of the past here, and the stars that we see are well-behaved young adults that have settled down inside their evaporating reflection nebulas. 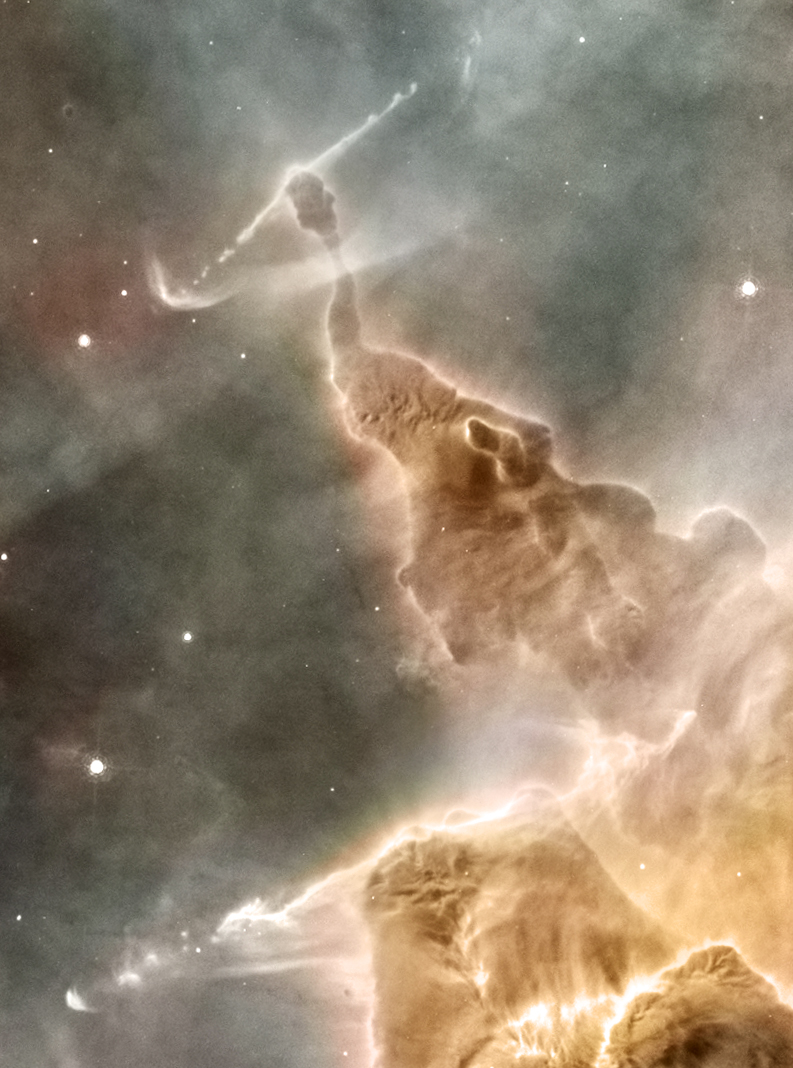 Annotated image of the Carina Nebula. The pillars with jets are at upper right, with the designation 'Herbig-Haro Object Stellar Jet'. Click on the image to see the full (still rather small) size of it.


The energetic phase of star formation can be seen in a pillar in the Carina Nebula. At star is forming at the very top of of this pillar, and the star is emitting long precessing jets in opposite directions. Note that there is a second pillar in this image, a short stubby pillar to the lower left, and this pillar too has an embedded star that is emitting jets.

In the image at right you can see the position of these pillar in relation to the entire Carina Nebula. The pillars are at upper right and "hanging down". They are being sculpted by the brilliant young cluster Trumpler 14, with its super-hot brightest star HD 93219. 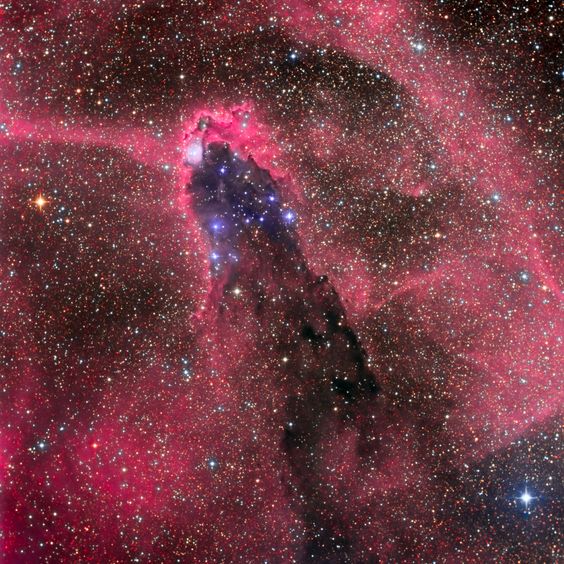 
In the Dark Tower too, the most interesting thing is happening at the very top of it. The "head" or even the "mouth" of the Dark Tower appears to be blowing a bubble with a star inside it. My guess is that this is the youngest star of the Dark Tower, the star that was most recently produced by it.