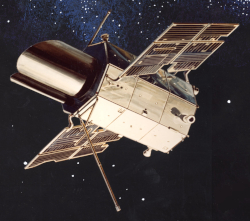 
Nicolaus Copernicus was a fifteenth century scholar who advanced our understanding of our place in space by establishing a mathematical model of the solar system with the Sun at its center and planets in orbit around it (an old idea first suggested more than a 1000 years before). Five hundred years later, humanity extended our understanding of our place in the Universe with the launch of the third Orbiting Astronomical Observatory, OAO-3 in 1972. OAO-3, renamed Copernicus, was the second successful astronomical observatory in space, and (arguably) NASA's first space satellite dedicated to multi-wavelength astronomy. Copernicus carried an ultraviolet telescope, along with three smaller X-ray telescopes and a non-imaging X-ray detector sensitive to X-rays within a large region of space (about 40 times larger than the apparent size of the full moon). Copernicus established the ubiquity of stellar winds from the hottest stars, and helped show how these powerful winds can shape the interstellar gas and dust permeating the Milky Way. The X-ray telescopes were hampered by unexpectedly strong background radiation, and other technical challenges, but the non-imaging detector operated throughout the nine-year operational life of the mission. The X-ray detector on Copernicus discovered several long-period X-ray pulsars and in 1975 even observed X-rays from a thermonuclear explosion on the surface of a white dwarf. Copernicus stopped observing in 1981, but still revolves around the earth today, its geocentric orbit a silent tribute to humanity's intrepid quest to explore.