We use Einstein's equations of General Relativity to understand what we see in the Universe. In addition to assuming his theory is right (it sure seems to be everywhere we have be able to measure so far), we do have to make a few assumptions. The most important of these are that the universe is homogenous (that is, the material in the Universe is, on average, evenly spread through out the Universe) and isotropic (matter, the expansion, and everything else is the same in all directions that we look). With these assumptions we can predict how bright an object will be given its rate of recession (the simple relation found by Hubble breaks down at large distances).

Can someone please explain what the last sentence (in bold) means by "breaks down at large distances"? Was the Hubble constant too small in some cases, too large in others and just right in some?
Top

The two teams, both of which have members in Europe, Latin America, Australia, and the United States, collected their supernova data with increasing efficiency over the last few years, expecting to find out by how much gravity was slowing cosmic expansion. Early this year, both teams announced that their expectations had been turned upside down: The relative dimness of the supernovae showed that they are 10% to 15% farther out than expected even in a universe with little matter, indicating that the expansion has accelerated over billions of years. At year's end, with dozens of supernovae analyzed, published, or in press, those conclusions stand.

The Hubble constant is too small.
Top

Chris Peterson is the one who should answer this question, or maybe another more knowledgeable person on these boards. Below that dotted line you can see another dotted line, where the dots are blacker and closer together. This dotted line shows you a universe whose mass content is exactly 1, which is the critical value here. This universe will keep expanding forever along its own dotted line. Note that this universe can only be about 9 billion years old today.

But if a universe contains more mass than the critical value, it will eventually collapse in a Big Crunch. The more mass it contains, the faster it will collapse. You can see a "dashed-and-dotted" line showing the expansion and collapse of a universe that contains six times as much mass as the critical value. Note how quickly this universe evolves. A universe that contains so much mass can't have been born 13.7 billion years ago, if it looks the way our own universe does today. It must have been born only about 6 billion years ago, and it will reach its maximum size perhaps 7 billion years from now. After that it will start contracting, and about 18 billion years from now it will collapse. 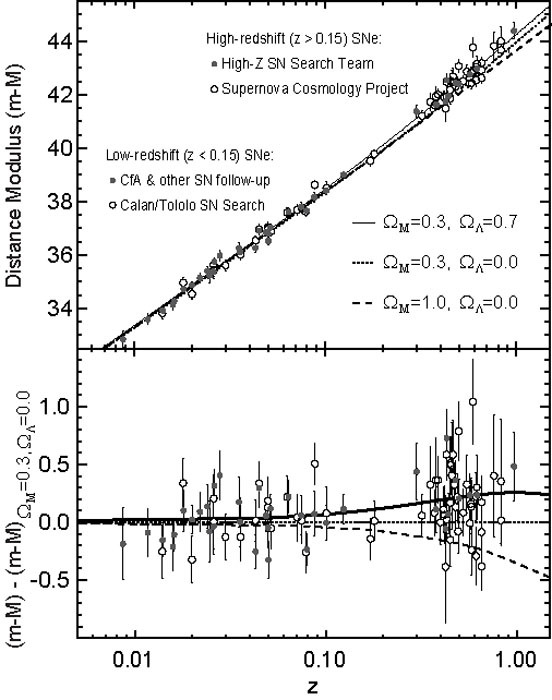 Why do we believe that our universe contains a lot of dark energy? The astronomical community got itself a one-two whammy in the late 1990s when two teams that had been investigating very distant supernovae, the High-Z Supernova Search Team and the Supernova Cosmology Project, both announced that the most distant supernovae they found really seemed to be farther away than they had any right to be, if the universe was expanding at a constant rate.

Remember that a universe that contains a lot of mass will evolve faster. Such a universe will have a "short past". If we had lived in a mass-rich universe which was going to collapse only 18 billion years from now, the most distant supernovae wouldn't have been so distant after all. Such a universe would have expanded a lot before the distant supernovae exploded, but it would have slowed down since then. The fact that the universe had expanded very much faster before the supernovae exploded than afterwards would make these supernovae quite bright and prove that they were comparatively nearby.

The cosmic microwave background (the CMB) apparently confirms the existence of a large amount of dark energy in our universe, but you will have to ask someone else to explain the CMB. Anyway, the dark energy is the component which is thought to cause the acceleration of our universe. 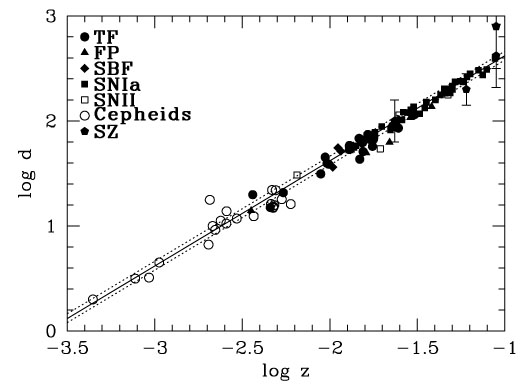 So what about the Hubble Constant? The Hubble Constant assumes that the universe expands at a constant rate. In the moderately nearby universe, the acceleration of the universe is negligible. That means that if you measure the redshift of relatively nearby galaxies and compare the redshifts with some known "standard candles" in those galaxies, such as Cepheid variables, you will find that the galaxies line up along a "straight line". The galaxies appear to move away from you at a constant speed. This means that in the moderately nearby universe, the Hubble Constant gives a good description of the expansion of the (local) universe.

It is only over larger distances that we can see that the universe is not expanding at a constant rate. Instead, it is accelerating, and the Hubble Constant no longer holds true.

ErnieM wrote:Can someone please explain what the last sentence (in bold) means by "breaks down at large distances"? Was the Hubble constant too small in some cases, too large in others and just right in some?

I think the wording is a bit sloppy. The problem is that there is no such thing as the Hubble constant. Or more precisely, it isn't constant. The expansion rate of the Universe has changed- huge during the inflationary period, then decreasing for a few billion years while things were dense enough that gravity dominated, then briefly constant, then increasing until now (and presumably forever) once the density dropped enough that dark energy became dominant.

Because of these different expansion rates, the Hubble "constant" is different when looking at photons from different times.
Chris