Explanation: South of Antares, in the tail of the nebula-rich constellation Scorpius, lies emission nebula IC 4628. Nearby hot, massive stars, millions of years young, radiate the nebula with invisible ultraviolet light, stripping electrons from atoms. The electrons eventually recombine with the atoms to produce the visible nebular glow, dominated by the red emission of hydrogen. At an estimated distance of 6,000 light-years, the region shown is about 250 light-years across, spanning an area equivalent to four full moons on the sky. The nebula is also cataloged as Gum 56 for Australian astronomer Colin Stanley Gum, but seafood-loving astronomers might know this cosmic cloud as The Prawn Nebula.

I like the image, and I do appreciate the work you do to give us one of these every day, but why do you guys keep recycling old captions?? This is the same caption as the 2006 image of the same nebula...
Top

Amazing image, you really get the impression that there is a lot of energy and activity in this area what with all the energetic and luminous clusters. It's so nice to see something southern on APOD!

What is the name of the old man wearing glasses and with a bushy beard?
Just left of the center of the picture and looking toward the west.
Top

merryjman wrote:I like the image, and I do appreciate the work you do to give us one of these every day, but why do you guys keep recycling old captions?? This is the same caption as the 2006 image of the same nebula...

It's not the same caption. It is based on the 2006 caption (which is reasonable, since it's the same object). But the two captions differ where they describe the details of the images themselves.
Chris

Ed Everett wrote:What is the name of the old man wearing glasses and with a bushy beard?
Just left of the center of the picture and looking toward the west.

All day I've been meaning to comment on this great picture - thanks for creating the image, Marco Lorenzi! - but I have been busy and tired and scatter-brained and I haven't had access to my software and....

I didn't recognize the nebula or the cluster, but the picture looks very suggestive. The very fact that there's a large emission nebula there is fascinating. Emission nebulae aren't all that common, and moderately unreddened, obvious ones are less common still. Not all young star clusters have them. For example, the Double Cluster in Perseus, which contain large numbers of hot bright stars and are believed to be about five million years, lack any nebulosity. On the other hand, NGC 6559 in Sagittarius, which does not contain any obvious O stars, does have a moderately bright nebular arc and a large, faint emission nebula. And just think of NGC 7000, the North America Nebula, which seems unrelated to any of the hot blue stars that are seen "in" it or near it. There are probably various reasons for the presence or absence of emission nebulae near hot stars: the stars may have "blown away" all the gas, for example, or two gas clouds may be violently colliding for other reasons than the wind and brilliance of hot stars.

So what causes the emission nebula in this case? Is it the stars themselves, or is it some "background factor" of some sort? Maybe a past supernova explosion, although the shape of the nebula doesn't seem right for that? A moderately nearby but separate powerful cluster whose wind makes the gas collide violently with the surrounding interstellar medium? 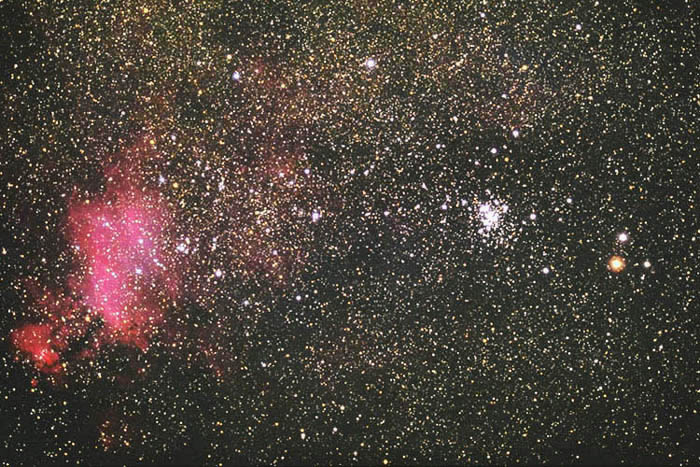 NGC 6231 on the right and IC 4628 and Cr 316 at left.
Photo: Michael A. Stecker.
After getting access to my software, I'd say that a combination of ultraviolet light from the hot blue stars in the scattered cluster in this picture (called Collinder 316), plus the strong wind and ultraviolet from moderately nearby, massive young open cluster NGC 6231 seems like the most probable reason for the emission nebula. That is because Collinder 316 and emission nebula IC 4628 are like extensions of NGC 6231.

This piqued my interest. How young are the stars of Collinder 316? If they are hot enough to ionize the hydrogen gas in the vicinity and create an appreciable emission nebula, then they really can't be very many million years old.

A clue may be found in the estimated age of NGC 6231, the compact nearby cluster.


http://en.wikipedia.org/wiki/NGC_6231 wrote:
This cluster is estimated about 3.2 million years old

Take a look at Marco Lorenzi's fine APOD again. The "moderately single-looking" brightish blue star at six o'clock is an evolved star star, HD 152667, possibly similar to Alnilam in Orion's Belt, according to my software. However, the small clustering of small stars to the upper right of HD 152667 is centered on what my software describes as a star of spectral class O7. If it is really a star of spectral class O7, then it is definitely hot enough to ionize an emission nebula. What's more, the small blue star directly above HD 152667, situated in the middle of the brightest part of the nebula and possibly the chief source of ionization, HD 152723, is also described by my software as a star of spectral class O7. These two O7 stars are likely younger than 3.2 million years.

What a fine and fascinating APOD this is!

[They made up the word 'prawn' to avoid the wacky phrase 'jumbo shrimp'.]
Top

Psnarf wrote:[They made up the word 'prawn' to avoid the wacky phrase 'jumbo shrimp'.]

I just figured it was the hypothesized origin of the aliens (aka "prawns") in District 9.
Chris

Er, scratch that! I just learned about the open clusters NGC6231, NGC6242, Collinder 316 and Trumpler 24 that are nearby within the asterism Scorpius.

Hey, I'm one of those seafood-loving astronomers!

The "Prawn" nebula? Who came up with this ridiculous designation? Is Gum not deserving enough? The last thing we need is a cutesy sky...
Top

Nice Nebula...I noticed "the man with the glasses too"...

rghoeing@buffalo.edu wrote:The "Prawn" nebula? Who came up with this ridiculous designation? Is Gum not deserving enough? The last thing we need is a cutesy sky...

"Gum" is just a catalog. "Gum 56" is a catalog designation for this object (IC 4628 is a more common one). "Prawn Nebula" is a name... which is different from a catalog number. Like the way we also call Messier 51 the Whirlpool Galaxy. FWIW, Gum 12 is often called the "Gum Nebula".

I think this image is showing much more than just the Prawn Nebula, including as well a good chunk of the large nebulous region around it.
Chris

Psnarf wrote:[They made up the word 'prawn' to avoid the wacky phrase 'jumbo shrimp'.]

I just figured it was the hypothesized origin of the aliens (aka "prawns") in District 9.


After watching the movie I support your hypothesis! And I assume that there are also living cats...
Top
16 posts • Page 1 of 1