Explanation: September's equinox arrives tomorrow as the Sun crosses the celestial equator heading south. The event marks the astronomical beginning of spring in the southern hemisphere and autumn in the north. And though the connection is still puzzling, the equinox seasons bring an increase in geomagnetic storms. So as northern nights grow longer, the equinox also heralds the arrival of a good season for aurora hunters. Recorded on September 20, these colorful northern lights were captured with camera and wide-angle lens near the Norwegian Sea coast outside Tromsø in Northern Norway. Shining at altitudes of 100 kilometers or so, the aurora rays are parallel, but perspective makes them appear to radiate from a vanishing point behind the silhouetted pine tree. Stars in this enchanting northern night include Polaris above and right of the tree top, and yellowish giant stars Shedar (Alpha Cassiopiae) to the left and Kochab (Beta Ursae Minoris) to the right. Bright Altair shines through the greenish auroral curtain at the lower left of the scene.

This is a very striking and good-looking APOD. The pine tree looks like some sort of firecracker spouting stars and colored lights.

I see a bright star above and right of the tree as indicated for Polaris, the north star, but do not see
the little dipper constellation it is part of. Why?
Top

I'm also having trouble finding the mentioned stars, other than Polaris...
Top

aurora2012sep20.jpg
I've circled the three stars in question - Shedar, Kochab and Altair - now here's hoping they are correct. I'm sure other forumites will be along to fix my bads, if needed!

You do not have the required permissions to view the files attached to this post.
Forget the box, just get outside.
Top

(It is too smoky where we live to see the sky - telescope sits and waits.)
Top

Locutus wrote:I'm also having trouble finding the mentioned stars, other than Polaris... 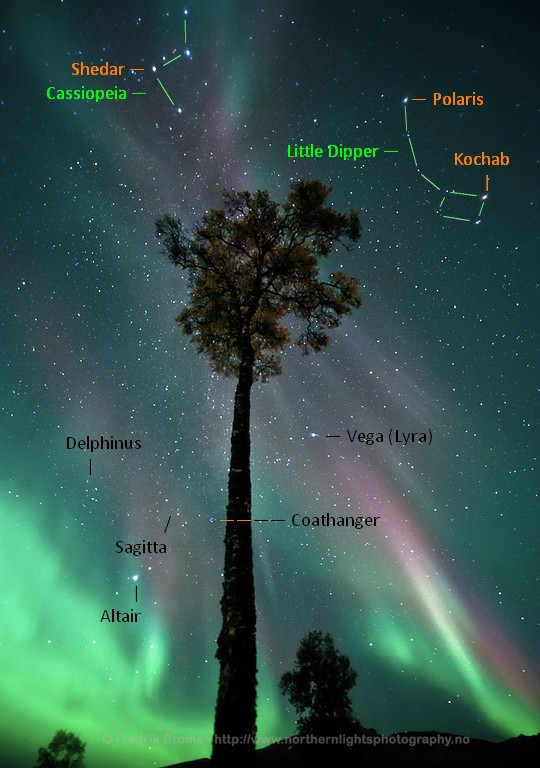