Below an image taken by my friend Ezequiel Bellocchio from Buenos Aires suburbs (Argentina) with an ODK 10" and a FLI Ml 8300
Total exposure time 5 hours.

Best Regards
Sergio
You do not have the required permissions to view the files attached to this post.
Top

Thanks for looking!
Scott Tucker
Top

Orion The Hunter with his two faithful dogs by his side watches over Taurus The Bull.

Wallaces Hut was built in 1889 and is the oldest still standing mountain hut of the 106 huts in the Alpine National Park. Constructed from local timber as shelter for the cattlemen who used to drive their herds up the mountains to graze on the high country plains in summer, it is a great reminder of the early pioneers in Australia.

Jupiter shines bright on the left of frame just next to Aldebaran the red eye of The Bull. In the middle of frame is Orion which is probably the most recognisable constellation in the night sky with its distinctive 'belt' and 'sword' stars and the red super-giant Betelgeuse and blue super-giant Rigel. For anyone in the northern hemisphere Orion appears upside down in this image to what you are normally used to due to my location in Australia. The bright star on the right of frame is Sirius which is the brightest star in the night sky. A 60% moon off to the left of frame is lighting up the landscape. The front of the hut was light painted during the single 25 second exposure with a small led torch. I was so busy trying to get the lighting right that I didn't notice the satellite flare through the frame. A very nice surprise.

I'd like to submit the following image to Asterisk/APOD. This field of view in Cepheus pairs the reflection nebula NGC 7129 with the star cluster NGC 7142 in the bottom left corner.

This is the result of 12.5 hours of exposure in LRGB using a PlaneWave CDK17 telescope and an Apogee U16M camera, riding atop a Paramount ME. The subframes were shot between August 15 and October 7 from my Cabin in the Sky Observatory in rural British Columbia, Canada. Image processing was done with PixInsight and CCDInspector. The posted image is downsampled X2: the full resolution version can be found here, along with more details on the image capture and processing. Now, this will be a bit of a stretch (astro-imager pun intended!), but could the reflection nebula be seen as the King's Crown, and the rich star field as the Crown Jewels

The field is almost filled with a faint absorption nebulosity that varies strongly in opacity across the frame, and which in some regions has a very apparent reddish hue. Many excellent renditions of NGC 7129 accentuate the absorption nebulosity, as in a beautiful image by Bob and Janice Fera that was featured in an 2008 APOD. I elected to apply a much more modest stretch to that background, with the tradeoff being a stronger sense of depth in the reflection nebula.

Thanks for looking!
Howard. 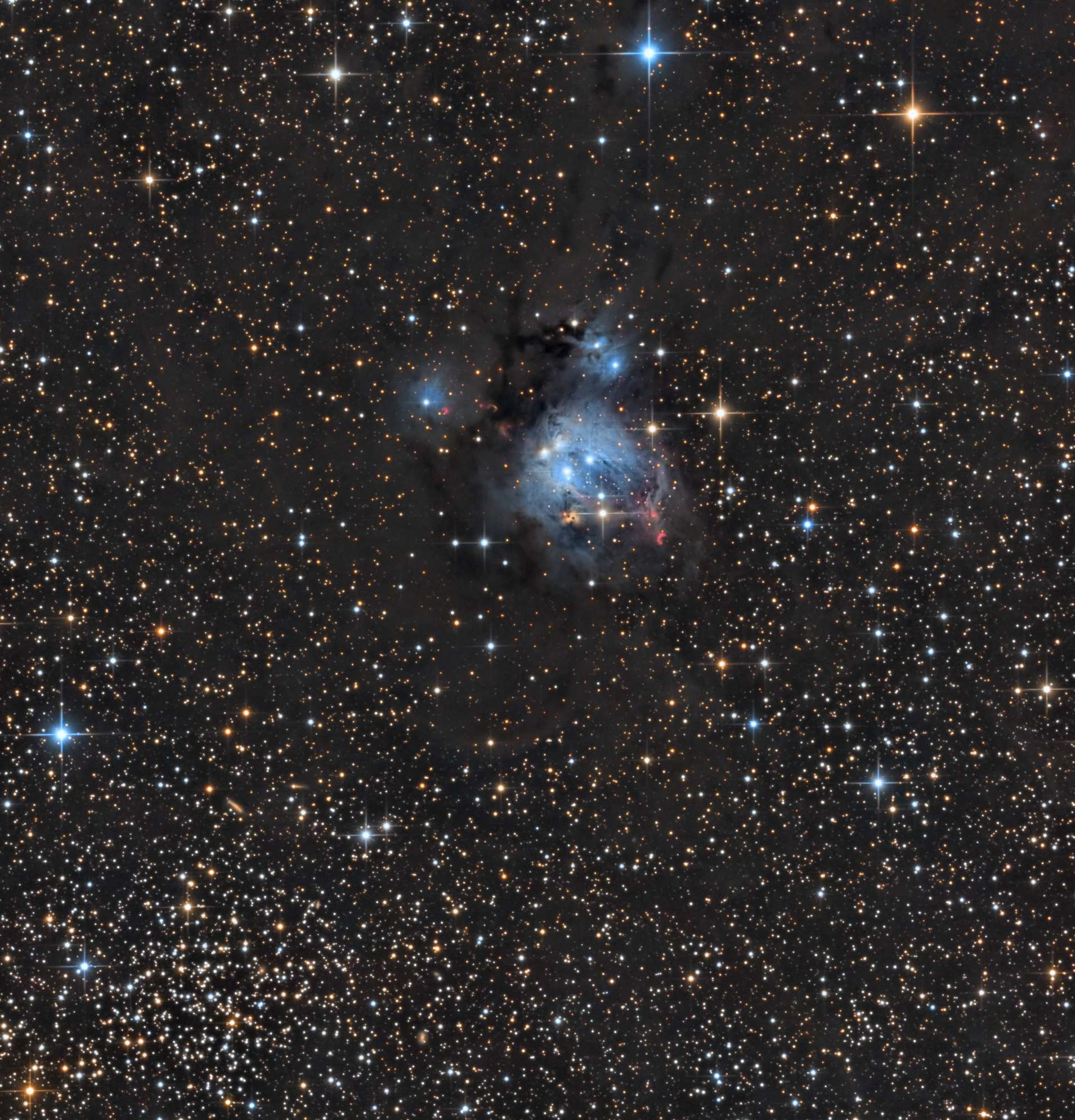 Found a moving star in front of the Ring nebula!

When working on imagery of the HST from M57 I found a dot moving. When combining images from 4 different years it clearly showed the proper motion of the star. In the databases this star is not marked as moving. It's great to make such a 'discovery'. Nice to see the universe really isn't static at all

animation_1998-2011_reduced.gif
You do not have the required permissions to view the files attached to this post.
Top

http://www.flickr.com/photos/42892564@N ... /lightbox/
Stereoscopic images of our moon date back to the mid 1800's. Daguerre tried to image the moon in 1839; a long unguided exposure produced a fuzzy ball. Warren de la Rue produced beautiful full-moon images in 1858 and 1859 (to catch lunar libration) for a stereoscopic presentation. Henry Draper completed a series of full-moon stereoscopic images in 1863.
You do not have the required permissions to view the files attached to this post.
Top

Recently I have been working on Hubble data of M57. When processing the data I found one of the stars moving between the images. Triggered by this I tried to find more data that could show the motion. I found some old images made in 1922 and around 1959 made by a 100-inch and a 200-inch telescope (Mount Palomar). I combined this data into an animation showing the motion in a period of 90 years. It’s clear that the motion of this star is quite fast (about 0.1”/yr) and very well detectable. The star showing the motion is 2Mass 18533272+3301234.

It's great to see the motion in almost a century. Just imagine where this star was a few hundred years ago

(The full resolution contains one more image of 1995 now).

animation_1922-2011_reduced.gif
I wanted to make a rough estimate of the distance of this star to calculate its velocity perpendicular to our solar system. Therefore I made some photometric measurements from the Hubble imagery. This gives a difference in magnitude for the V and I channels (V-I) of about 1.5 +/- 0.2.

According to Rucinsky (1987)this corresponds to a red dwarf star with a designation of about K5-K8. When using spectroscopic parallax this gives a distance of the star of about 650-950 lightyears. So it's clearly closer by then the nebula which has a distance of about 1500-2500 lightyears.

Further more I found that the expansion of the nebula between 2000 and 2008 can be seen... This is really nice to see...
You do not have the required permissions to view the files attached to this post.
Last edited by avdhoeven on Sun Dec 23, 2012 8:37 pm, edited 2 times in total.
Top

We were visiting our oldest daughter in Colorado Springs, CO over Thanksgiving and saw this rainbow cloud. 
Taken under 3/4 full moon. Not many bright stars visible in this direction, southwest. I think the brightest one, on right side, halfway up is Fomalhaut. The one that seems to pass through the dome is the only other one I could see due to the bright moonlight, which is reflected on the top of the dome.

Aurora over salmons
http://astrophotography.fr/
Copyright: JL Dauvergne
[attachment=0]Salmon_Dauvergne.jpg[/attachment]
http://www.astrosurf.com/eternity/temp/ ... itre1T.jpg
In this period of christmas, many people savor smoked salmon. Most of it in Europe come from Norway. Salmons are farmed in those circulars cages. In this fjord at 70° N the sun stay under the horizon for several weeks, but when the weather is good the sea is illuminated by northern lights.
I took this image on 2012 december 16 th.
You do not have the required permissions to view the files attached to this post.
Last edited by owlice on Mon Dec 24, 2012 12:03 pm, edited 2 times in total.
Reason: Attached smaller image for faster downloading; left link to larger image. Thanks for sharing!
Top

Thanks for looking!
Rochus
Top

Old fisherman's boats under the northern lights
http://astrophotography.fr/
Copyright: Jean-Luc Dauvergne
[attachment=0]Aurora_Dauvergne.jpg[/attachment]
http://www.astrosurf.com/eternity/temp/IMG_9465ts.jpg
Thanks to a huge coronal hole last week, beautifull auroras were visible in Norway like this one near Komagfjord.
You do not have the required permissions to view the files attached to this post.
Last edited by owlice on Mon Dec 24, 2012 11:59 am, edited 3 times in total.
Reason: Attached smaller image for faster downloading; left link to larger image. Thanks for sharing!
Top

Diamonds in the Sky??

Well that is what it is called NGC 2516: The Diamond Cluster. Located deep south in the constellation of Carina this cluster contains more than 100 starsThe brightest member is a red giant shining at magnitude 5. NGC 2516 is very easy to spot for the naked eye in darks locations. Since the cluster is rather big, binoculars tend to give the best view. The Cluster was discovered by French Astronomer Abbe Lacaille in 1751-1752.
The image was taken with a 6 inches OOUK f5 Newtonian and a QSI 583 WS riding in a NEQ6 for a total exposure time of two and a half hours, 100 north from Buenos Aires Argentina.

More information and image with higher resolution at
http://www.baskies.com.ar

Best to all
Sergio
You do not have the required permissions to view the files attached to this post.
Last edited by Sergio on Mon Dec 24, 2012 11:46 am, edited 1 time in total.
Top On the left of the image you can see a bright meteor appear to cross paths with a dimmer man-made satellite. On the right side of the photo is one of the observatory structures at Full-Shine Solar Observatory (FSO), located in Yunnan China. Situated on the northeast side of Fuxian Lake, the observatory began operation in May 2010."
full size:http://www.flickr.com/photos/jeffdai/80 ... hotostream
Top

The Southern Cross over the Ballarat Observatory

The Southern Cross and the two pointer stars- Alpha & Beta Centauri, over one of the oldest operating observatories in Australia.

The Coalsack Dark Nebula, is visible in the top center of the image, just to the bottom of Alpha Crux.
The laser is pointing to Beta Crux.

The Ballarat Observatory built in the 19th century is one of the oldest operating observatories in Australia and home to what was once the second largest telescope in the Southern Hemisphere - The 26-inch Baker Telescope aka 'The Great Equatorial Telescope' built in 1880.

The domed observatory seen in this image was built in 1918 and houses a refractor which is still in use!

I wish you All a Merry Christmas!!!

http://vegastarcarpentier.com/wp-conten ... 3.2012.jpg
You do not have the required permissions to view the files attached to this post.
Last edited by owlice on Mon Dec 24, 2012 1:34 pm, edited 1 time in total.
Reason: Attached smaller image for faster downloading; left link to larger image. Thanks for sharing, and Merry Christmas!
Top

Star trails over the Ballarat Observatory, the south celestial pole is to the top-right of the image (out of frame)

Taken on a warm summers night from Ballarat, Australia.

Mid-december, Jupiter was at his closest distance of Aldebaran, and not far of Hyades and Pleiades clusters. At 70°N in Norway, northern lights are strong enought to be visible even in the direction of the south and behind this planet and those stars.

Another view without auroras on the way back :
[attachment=0]WayBack_Dauvergne.jpg[/attachment]
http://www.astrosurf.com/eternity/temp/IMG_1036ts.jpg
You do not have the required permissions to view the files attached to this post.
Last edited by owlice on Mon Dec 24, 2012 1:43 pm, edited 1 time in total.
Reason: Attached smaller images for faster downloading; left link to larger images. Thanks for sharing!
Top

Geminid Meteor Shower
The Geminid meteor shower put on a fine display the night of December 13, 2012. In this excellent composite image that looks high in the northeast. Shown are nine different meteors captured with a Canon Rebel T2i digital SLR camera at 17 mm focal length using individual exposures of 1 minute at f/2.8, ISO 400, on a Celestron CG-5GT tracking mount. Trace the meteor trails back towards Castor in the upper right-hand corner to find the radiant in Gemini.
http://www.rddnj.com/JimmyMacksPictureGallery.html
Copyright: James "Jimmy" Mack

A rarely imaged HII zone in Cepheus. As a result of the cooperation of two amateur astonomers (András Dán, László Francsics), with more than 40 hours of exposition. Using DSLR and CCD techology, through RGB, SII, H-alpha and OIII filters.