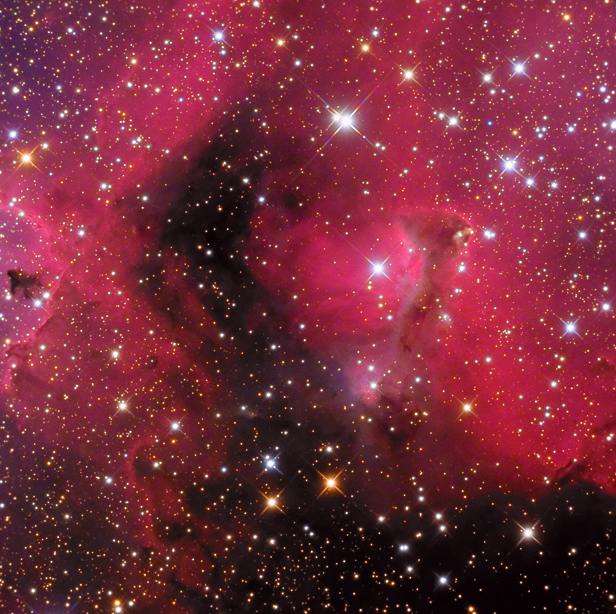 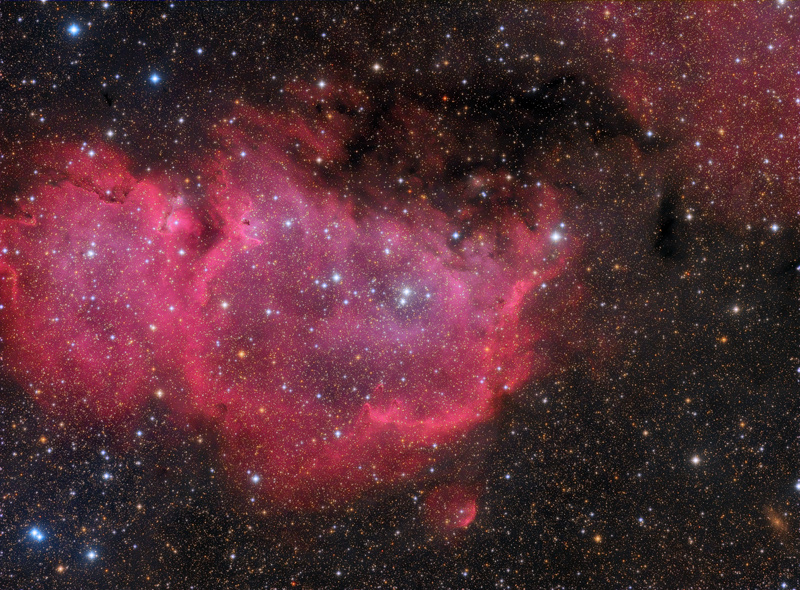 NGC 1788 in Orion
copyright: Mark Hanson
This is a dark and mysterious creature, kind of a scary sort of image and if nebula had personalities this is one I would not want to meet in a dark ally!
NGC 1788APOD.jpg
For higher resolution images visit http://www.btlguce.com
You do not have the required permissions to view the files attached to this post.
Top

M33 (The Triangulum Galaxy) is the member of our local group of galaxies. It is over 50000 light-years in diameter, the third largest in the Local Group of galaxies - only our own Milky Way and M31 (Andromeda Galaxy) are larger. The popular names of M33 include the Pinwheel Galaxy or Triangulum Galaxy.
The spacious spiral arms of M33 are rich in star forming HII regions. M33 is a faint and extended galaxy with a small, almost starlike nucleus. The light haze consist of faint stars, which shines in the yellowish light. Dark dust lanes can be traces into the nucleus. Unlike many other large galaxies, such as the Milky Way and Andromeda, M33 does not have a supermassive black hole in its center. From the nucleus, spiral arms reach out through the disk, which are populated by young hot blueish stars. They have formed from reddish diffuse nebulae, and indicate activity of star formation. Some of the bluish star clouds and reddish H II regions (diffuse nebulae) have been assigned by own NGC or IC numbers. The brightest and most impressive of M33's HII regions is NGC 604. This massive HII region spans about 1500 light years. There are also a number of globular clusters in the spiral arms.

An identification map can be seen here: M57, the most detailed image ever taken

Last summer I started processing some Hubble data for the hidden treasures competition. When browsing through the hubble archives today I found this, previously not released, data of M57 from September 2011. I processed this data with the following result. This image shows the ring nebula with a detail never shown before anywhere in the world (as far as I know...).

Based on observations made with the NASA/ESA Hubble Space Telescope, and obtained from the Hubble Legacy Archive, which is a collaboration between the Space Telescope Science Institute (STScI/NASA), the Space Telescope European Coordinating Facility (ST-ECF/ESA) and the Canadian Astronomy Data Centre (CADC/NRC/CSA). Processing: André van der Hoeven (www.astro-photo.nl)
You do not have the required permissions to view the files attached to this post.
Top

This is a composite of all the Geminid meteors captured over Pendleton, Oregon on the evening of December 13, 2012. I took these from Emigrant Hill. In the valley below, you can see the light “footprint” of Pendleton, Mission, the Wildhorse Casino, and several other smaller towns. Fog has enveloped most of the cities below.

IC2220 is the result of the reflection of gas and star material coming ejected from the red giant HD 65750. The dust emitted from the red star is not displaced equally in all directions. It is thought that the material is distributed via magnetic fields, electric fields or the rotation of the central star giving an irregular shape. Astro photographer David Malin called this object the Toby Jug Nebula after the english drinking vessel. For some others the shape resembles a similarity with a flying butterfly.

More information and the image in lager resolution in
http://www.baskies.com.ar

Here is the Hubble image of M57 combined with data from the Subaru Telescope in Hawaii. The data was kindly provided by Robert Gendler.

m57_hst_subaru_avdhoeven_rgendler_web.jpg
You do not have the required permissions to view the files attached to this post.
Top 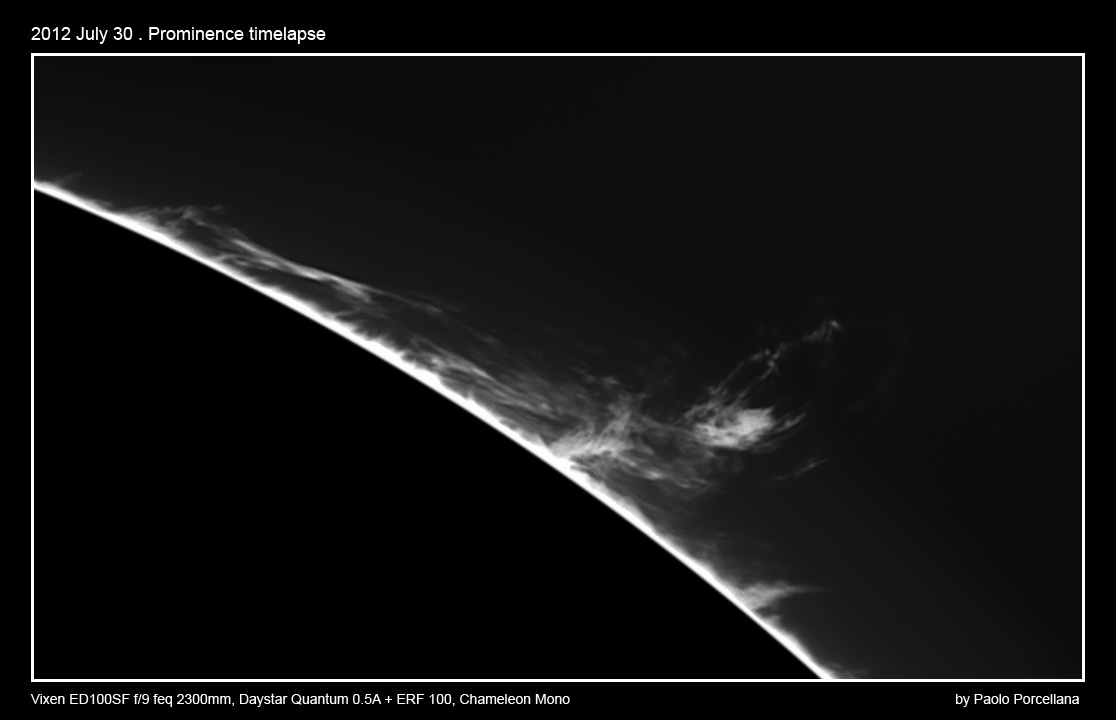 The timelapse represent a close up portion of the sun of 30 July with the evolution of a fast prominence during half hour of observation.
Images taken with a 100 ed refractor using a Daystar h-alpha filter at a focal of 2300mm.

A Rose by Any Name!
Copyright: Fred Herrmann

M76: The "Little Dumbbell" Nebula in Perseo.
A nice "bipolar" planetary nebula on a rich star field with several little galaxies on the background

Every year I make a best of Solar System. This year was exciting for me with the birth of my 4th child, the Venus Transit, a visit from renowned amateur astronomer, Chris Go and Google came to my house to film a short video on the Virtual Star Party hosted though Universe Today. This photo is somewhat incomplete and missing Uranus, Venus in UV, this is not my best Mars and I have to add Ceres and Vesta in High Res. With the push for holiday time off and the timeliness of getting a good "New Years" post, I thought it wise to share the preview! 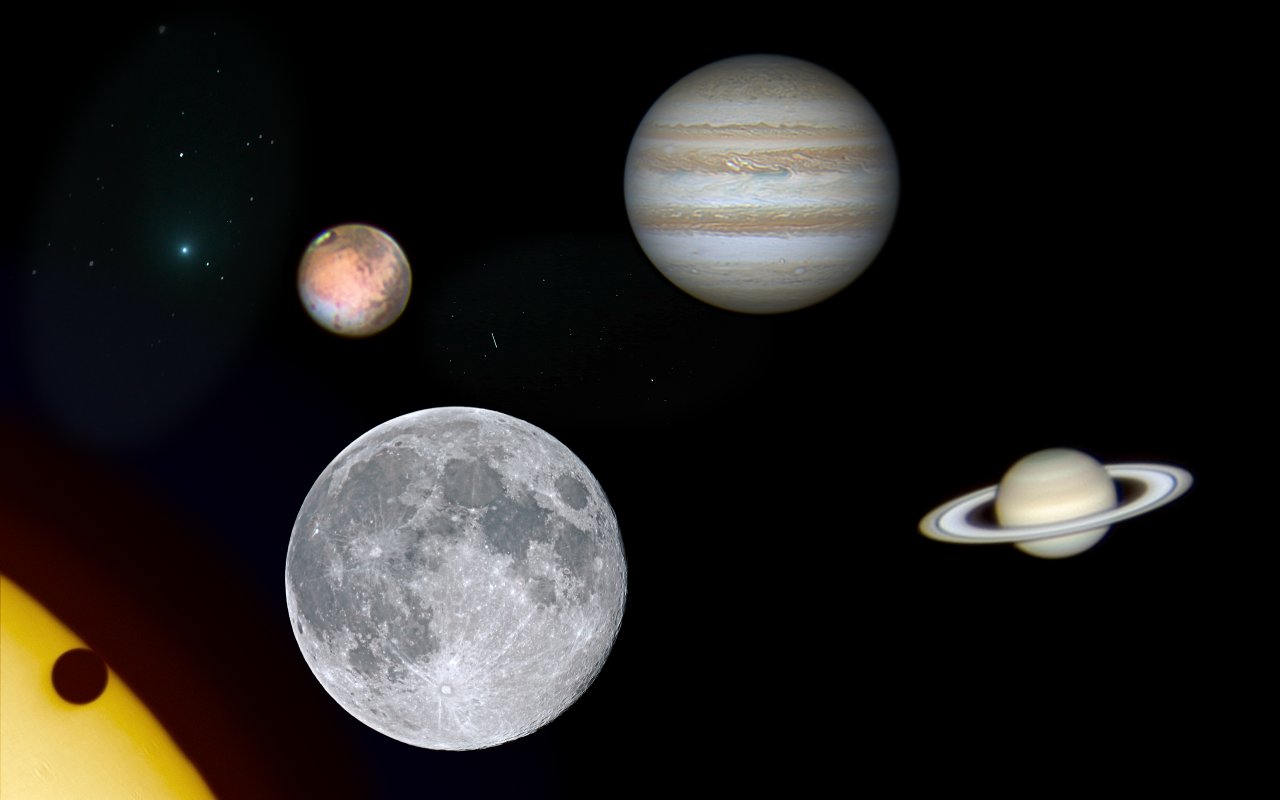 Montage showing how the persistent train from a recent Geminid meteor (streak was just under 5 degrees) distorts in the atmosphere. Each exposure was 10 seconds: left column shows normal colours, middle column has the star background subtracted and meteor train histogram-stretched, and right column has stars subtracted and entire image inverted for greater contrast.

The same meteor and its train can also be seen in this time lapse video (representing 14 minutes of elapsed time):

The south pole
Copyright: Petr Horálek, Obseravtory Úpice (http://www.obsupice.cz/new/_ohvezdarne. ... ohvezdarne)
This composition of south pole I made during my trip to Australia. The pole was around 16 degrees above horizon, but the sky was relatively dark (Mareeba city was around 120 km south, there were just cirrus clouds). It is stack of 68 images (15 s, ISO 1600, Samyang 24 mm/1.4, f2.8, Canon 550D on tripod, dark frames applied). I captured this shot of the Geminids meteor shower at Lily Lake in Rocky Mountain National Park. I did one big stitched image of about 400 megapixels to capture the sky and foreground. And I used a 14mm lens to capture all the meteors. Then I took each of the frames with meteors and up-rezed and aligned them with the larger stitched image, before masking out everything but the meteors in those images. In all there's about 26 meteors in this shot. I believe the Andromeda Galaxy is to the left of the Milky Way.
Top

A Rose by any Name!
http://fth.bounceme.net/
Copyright: Fred Herrmann all rights reserved!

176.jpg
177.jpg
178.jpg
You do not have the required permissions to view the files attached to this post.
Top

M42 Series of The Great Nebula in Orion
I present to you 4 different versions of this majestic nebula, created using broad band and narrow band filters. I decided to orient it this way as it reminded me of a christmas tree with NGC1977 "The Running Man Nebula" representing the base. Total integration time 17.8 hours
Copyright: Terry Hancock
CFHT Palatte (Canada France Hawaii Telescope technique)
http://www.flickr.com/photos/terryhanco ... hotostream