Scientists have solved a major problem with the current standard model of cosmology identified by combining results from the Planck spacecraft and measurements of gravitational lensing in order to deduce the mass of ghostly sub-atomic particles called neutrinos.

The team, from the universities of Manchester and Nottingham, used observations of the Big Bang and the curvature of space-time to accurately measure the mass of these elementary particles for the first time.

The recent Planck spacecraft observations of the Cosmic Microwave Background (CMB) – the fading glow of the Big Bang – highlighted a discrepancy between these cosmological results and the predictions from other types of observations.

Professor Richard Battye, from The University of Manchester School of Physics and Astronomy, said: "We observe fewer galaxy clusters than we would expect from the Planck results and there is a weaker signal from gravitational lensing of galaxies than the CMB would suggest.

"A possible way of resolving this discrepancy is for neutrinos to have mass. The effect of these massive neutrinos would be to suppress the growth of dense structures that lead to the formation of clusters of galaxies."

Neutrinos interact very weakly with matter and so are extremely hard to study. They were originally thought to be massless but particle physics experiments have shown that neutrinos do indeed have mass and that there are several types, known as flavours by particle physicists. The sum of the masses of these different types has previously been suggested to lie above 0.06 eV (much less than a billionth of the mass of a proton).

In this paper, Professor Battye and co-author Dr Adam Moss, from the University of Nottingham, have combined the data from Planck with gravitational lensing observations in which images of galaxies are warped by the curvature of space-time. They conclude that the current discrepancies can be resolved if massive neutrinos are included in the standard cosmological model. They estimate that the sum of masses of neutrinos is 0.320 +/- 0.081 eV (assuming active neutrinos with three flavours).

Dr Moss said: "If this result is borne out by further analysis, it not only adds significantly to our understanding of the sub-atomic world studied by particle physicists, but it would also be an important extension to the standard model of cosmology which has been developed over the last decade."

The paper is published in Physical Review Letters and has been selected as an Editor's choice.


In the abstract of the paper, the authors make this caveat:

However, a caveat to our result is some internal tension between the CMB and lensing/cluster observations, and the masses are in excess of those estimated from the shape of the matter power spectrum from galaxy surveys.

A copy of the paper is available from:
http://arxiv.org/abs/1308.5870
"In those rare moments of total quiet with a dark sky, I again feel the awe that struck me as a child. The feeling is utterly overwhelming as my mind races out across the stars. I feel peaceful and serene."
&mdash; Dr Debra M. Elmegreen, Fellow of the AAAS
Top

Re: UMan/UNottm:neutrinos solve a cosmological conundrum

<<Professor Battye and co-author Dr Adam Moss, from the University of Nottingham, have combined the data from Planck with gravitational lensing observations in which images of galaxies are warped by the curvature of space-time. They conclude that the current discrepancies can be resolved if massive neutrinos are included in the standard cosmological model. They estimate that the sum of masses of neutrinos is 0.320 +/- 0.081 eV (assuming active neutrinos with three flavours).

http://en.wikipedia.org/wiki/Neutrino#Mass wrote:
<<The Standard Model of particle physics assumed that neutrinos are massless.
However, the experimentally established phenomenon of neutrino oscillation requires neutrinos to have nonzero masses.

The strongest upper limit on the masses of neutrinos comes from cosmology: the Big Bang model predicts that there is a fixed ratio between the number of neutrinos and the number of photons in the cosmic microwave background. If the total energy of all three types of neutrinos exceeded an average of 50 eV per neutrino, there would be so much mass in the universe that it would collapse.

A much more stringent constraint comes from a careful analysis of cosmological data, such as the cosmic microwave background radiation, galaxy surveys, and the Lyman-alpha forest. These indicate that the summed masses of the three neutrino varieties must be less than 0.3 eV. In July 2010 the 3-D MegaZ DR7 galaxy survey reported that they had measured a limit of the combined mass of the three neutrino varieties to be less than 0.28 eV. A tighter upper bound yet for this sum of masses, 0.23 eV, was reported in March of 2013 by the Planck collaboration.>> 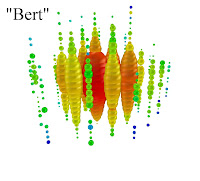 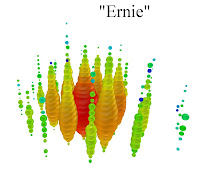 Each dot is an IceCube optical sensor that observed Cherenkov light
from the charged particles produced in the neutrino interaction.
The colors show when the light arrived at the sensor (red = earliest,
then yellow, green, blue...), and the size of the circle indicates
the number of photons that were observed
<<Last August, I posted a piece about two high energy (PeV, 1015 eV neutrinos that IceCube had observed. The neutrinos had been announced at Neutrino 2012, the main scientific conference for neutrino enthusiasts. Now, we (IceCube) has written a paper about the two events, which has been posted to the Cornell preprint server at http://arxiv.org/pdf/1304.5356v1. The events have not changed much, but we have spent the intervening months refining the reconstructions and evaluating the backgrounds. We now know the energies much more accurately: 1.04 and 1.14 PeV respectively, with a 15% uncertainty. 1 PeV = 1,000,000,000,000,000 electron volts, compared to 120 electron volts for an electron moving through the wires in your house.

We are also hard at work at follow-up studies, but we're not ready to present these yet. The two events have been given catchy names, which have been featured in a number of news & blog reports about the events. The two event displays show the two events. .>>

has a relativistic Lorentz factor:

neufer wrote:
While F = m a is a bit more rigorous it is dead wrong for a mass changing object![/size]

I would teach in order: