The Magellanic Clouds and the stream of neutral hydrogen. The insets show the image of the largest satellite discovered (Eridanus 2) as well as the smallest one (Indus 1). Credit: V.Belokurov, S.Koposov (IoA, Cambridge). HI image: M.Putman (Columbia)

Astronomers have discovered a ‘treasure trove’ of rare dwarf satellite galaxies orbiting our own Milky Way. The discoveries could hold the key to understanding dark matter, the mysterious substance which holds our galaxy together.

A team of astronomers from the University of Cambridge have identified nine new dwarf satellites orbiting the Milky Way, the largest number ever discovered at once. The findings, from newly-released imaging data taken from the Dark Energy Survey, may help unravel the mysteries behind dark matter, the invisible substance holding galaxies together.

The new results also mark the first discovery of dwarf galaxies – small celestial objects that orbit larger galaxies – in a decade, after dozens were found in 2005 and 2006 in the skies above the northern hemisphere. The new satellites were found in the southern hemisphere near the Large and Small Magellanic Cloud, the largest and most well-known dwarf galaxies in the Milky Way’s orbit. ...

According to the Cambridge team, three of the discovered objects are definite dwarf galaxies, while others could be either dwarf galaxies or globular clusters – objects with similar visible properties to dwarf galaxies, but not held together with dark matter. ... These two images allow you to see how difficult it is to spot these dwarf galaxy candidates
in the Dark Energy Camera's images. The first image is a snapshot of DES J0335.6-5403,
a celestial object found with the Dark Energy Camera. It is the most likely of the newly
discovered candidates to be a galaxy, according to DES scientists. This object sits roughly
100,000 light-years from Earth, and contains very few stars – only about 300 could be
detected with DES data. The second image shows the detectable stars that likely belong
to this object, with all other visible matter blacked out. Dwarf satellite galaxies are so
faint that it takes an extremely sensitive instrument like the Dark Energy Camera to find
them. More analysis is required to confirm if any of the newly discovered objects are in
fact galaxies. (Credit: Fermilab/Dark Energy Survey)
Scientists on two continents have independently discovered a set of celestial objects that seem to belong to the rare category of dwarf satellite galaxies orbiting our home galaxy, the Milky Way.

Dwarf galaxies are the smallest known galaxies, and they could hold the key to understanding dark matter and the process by which larger galaxies form.

A team of researchers with the Dark Energy Survey, headquartered at the U.S. Department of Energy’s Fermi National Accelerator Laboratory, and an independent group from the University of Cambridge jointly announced their findings today. Both teams used data taken during the first year of the Dark Energy Survey, all of which is publicly available, to carry out their analysis. ...

Satellite galaxies are small celestial objects that orbit larger galaxies, such as our own Milky Way. Dwarf galaxies can be found with fewer than 100 stars and are remarkably faint and difficult to spot. (By contrast, the Milky Way, an average-sized galaxy, contains billions of stars.)

These newly discovered objects are a billion times dimmer than the Milky Way and a million times less massive. The closest of them is about 100,000 light-years away. ...

Scientists have previously found more than two dozen of these satellite galaxies around our Milky Way. About half of them were discovered in 2005 and 2006 by the Sloan Digital Sky Survey, the precursor to the Dark Energy Survey. After that initial explosion of discoveries, the rate fell to a trickle and dropped off entirely over the past five years.


Eight New Milky Way Companions Discovered in First-Year Dark Energy Survey Data - DES Collaboration
Know the quiet place within your heart and touch the rainbow of possibility; be
alive to the gentle breeze of communication, and please stop being such a jerk. — Garrison Keillor
Top

CMU/Brown: ɣ-rays from Dwarf Galaxy May Point to Dark Matter 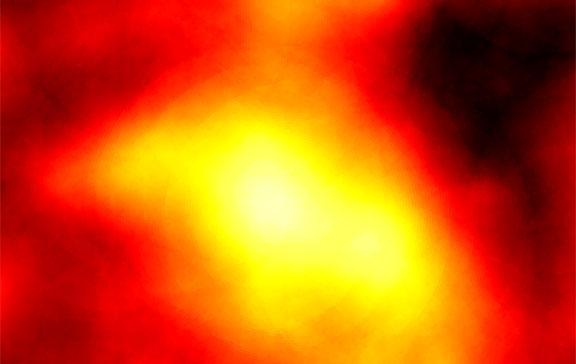 Scientists have detected gamma ray emissions from the direction of the galaxy Reticulum 2, a newly discovered dwarf galaxy 98,000 light-years away. Bright areas indicate a strong gamma ray signal coming from the direction of the galaxy, according to the researchers’ search algorithm. (Credit: NASA/DOE/Fermi-LAT Collaboration/Geringer-Sameth & Walker/Carnegie Mellon University/Koushiappas/Brown University)

Scientists have detected for the first time gamma rays emanating from a dwarf galaxy. Such a detection may be the signal of dark matter particles annihilating, a long-sought prediction of many dark matter theories.

A newly discovered dwarf galaxy orbiting our own Milky Way has offered up a surprise — it appears to be radiating gamma rays, according to an analysis by physicists at Carnegie Mellon, Brown, and Cambridge universities. The exact source of this high-energy light is uncertain at this point, but it just might be a signal of dark matter lurking at the galaxy’s center.

“Something in the direction of this dwarf galaxy is emitting gamma rays,” said Alex Geringer-Sameth, a postdoctoral research associate in CMU’s Department of Physics and the paper’s lead author. “There’s no conventional reason this galaxy should be giving off gamma rays, so it’s potentially a signal for dark matter.”

The galaxy, named Reticulum 2, was discovered within the last few weeks in the data of the Dark Energy Survey, an experiment that maps the southern sky to understand the accelerated expansion of the universe. At approximately 98,000 light-years from Earth, Reticulum 2 is one of the nearest dwarf galaxies yet detected. Using publicly available data from NASA’s Fermi Gamma-ray Space Telescope, CMU’s Geringer-Sameth and Matthew Walker and Brown’s Savvas Koushiappas have shown gamma rays coming from the direction of the galaxy in excess of what would be expected from normal background.

“In the search for dark matter, gamma rays from a dwarf galaxy have long been considered a very strong signature,” said Koushiappas, assistant professor of physics at Brown. “It seems like we may now be detecting such a thing for the first time.” ...


Evidence for Gamma-ray Emission from the Newly Discovered Dwarf Galaxy Reticulum 2 - Alex Geringer-Sameth et al
Know the quiet place within your heart and touch the rainbow of possibility; be
alive to the gentle breeze of communication, and please stop being such a jerk. — Garrison Keillor
Top

Re: Cambridge: New Dwarf Galaxies Discovered in Milky Way Or

In the first picture, the Eridanus dwarf galaxy looks strikingly blue. All these dwarf galaxies are apparently found not far from the Magellanic stream, which just possibly suggests that their stars could be young. But I suppose it is more likely that the galaxies have been colored blue for enhanced visibility. The Dark Energy Survey has now mapped one-eighth of the full sky (red shaded region)
using the Dark Energy Camera on the Blanco telescope at the Cerro Tololo Inter-American
Observatory in Chile (foreground). This map has led to the discovery of 17 dwarf galaxy
candidates in the past six months (red dots), including eight new candidates announced
today. Several of the candidates are in close proximity to the two largest dwarf galaxies
orbiting the Milky Way, the Large and Small Magellanic Clouds, both of which are visible
to the unaided eye. By comparison, the new stellar systems are so faint that they are
difficult to “see” even in the deep DES images and can be more easily visualized using
maps of the stellar density (inset). Fourteen of the dwarf galaxy candidates found in
DES data are visible in this particular image. (Illustration: DES Collaboration)
Scientists on the Dark Energy Survey, using one of the world’s most powerful digital cameras, have discovered eight more faint celestial objects hovering near our Milky Way galaxy. Signs indicate that they, like the objects found by the same team earlier this year, are likely dwarf satellite galaxies, the smallest and closest known form of galaxies.

Satellite galaxies are small celestial objects that orbit larger galaxies, such as our own Milky Way. Dwarf galaxies can be found with fewer than 1,000 stars, in contrast to the Milky Way, an average-size galaxy containing billions of stars. Scientists have predicted that larger galaxies are built from smaller galaxies, which are thought to be especially rich in dark matter, the substance that makes up about 25 percent of the total matter and energy in the universe. Dwarf satellite galaxies, therefore, are considered key to understanding dark matter and the process by which larger galaxies form.

The main goal of the Dark Energy Survey (DES), as its name suggests, is to better understand the nature of dark energy, the mysterious stuff that makes up about 70 percent of the matter and energy in the universe. Scientists believe that dark energy is the key to understanding why the expansion of the universe is speeding up. To carry out its dark energy mission, DES takes snapshots of hundreds of millions of distant galaxies. However, some of the DES images also contain stars in dwarf galaxies much closer to the Milky Way. The same data can therefore be used to probe both dark energy, which scientists think is driving galaxies apart, and dark matter, which is thought to hold galaxies together.

Scientists can only see the faintest dwarf galaxies when they are nearby, and had previously only found a few of them. If these new discoveries are representative of the entire sky, there could be many more galaxies hiding in our cosmic neighborhood. ...


Eight Ultra-faint Galaxy Candidates Discovered in Year Two of the Dark Energy Survey - DES Collaboration
Know the quiet place within your heart and touch the rainbow of possibility; be
alive to the gentle breeze of communication, and please stop being such a jerk. — Garrison Keillor
Top
4 posts • Page 1 of 1