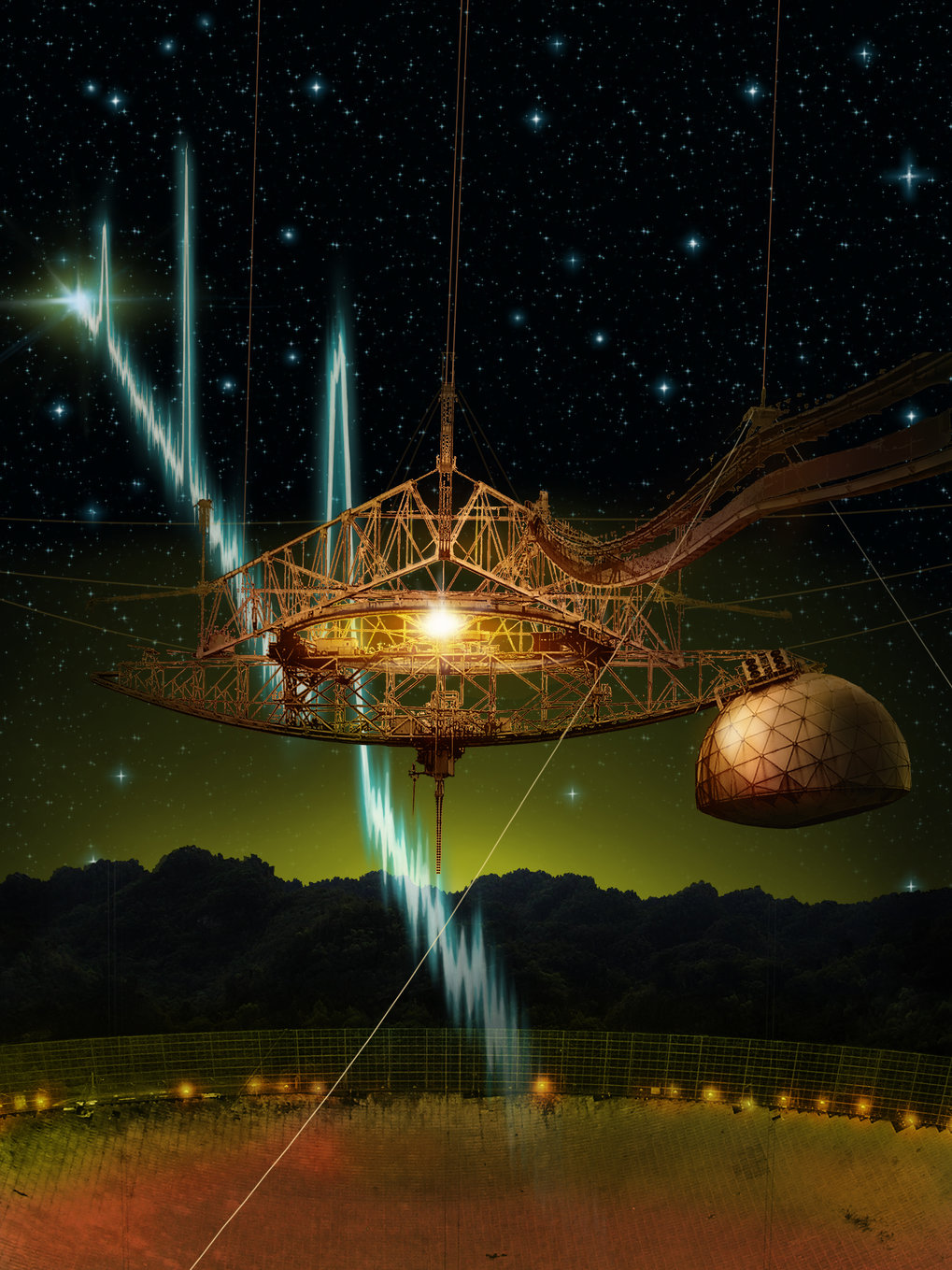 The 305-m Arecibo telescope and its suspended support platform of radio receivers is shown amid a starry night. From space, a sequence of millisecond-duration radio flashes are racing towards the dish, where they will be reflected and detected by the radio receivers. Such radio signals are called fast radio bursts, and Arecibo is the first telescope to see repeat bursts from the same source. (Credit: Danielle Futselaar)

An international research team including astronomers from the Max Planck Institute for Radio Astronomy (MPIfR) in Bonn, Germany, has discovered the first source of repeating bursts of radio waves which is located well beyond our Milky Way galaxy. Fast radio bursts (FRBs), lasting just a few thousandths of a second, have puzzled scientists since they were first reported nearly a decade ago. The findings indicate that these “fast radio bursts” come from an extremely powerful object which occasionally produces multiple bursts in under a minute. ...

Until now most theories about the origin of these mysterious pulses have involved cataclysmic incidents that destroy their source – a star exploding in a supernova, for example, or a neutron star collapsing into a black hole. That changed last November, when McGill University PhD student Paul Scholz was sifting through results from these monitoring observations and found 10 more bursts. “The repeat signals were surprising – and very exciting,” Scholz says. “I knew immediately that the discovery would be extremely important in the study of FRBs.”

This finding suggests that these bursts must have come from an exotic object, such as a rotating neutron star having unprecedented power that enables the emission of extremely bright pulses, the researchers say. It is also possible that the finding represents the first discovery of a sub-class of the cosmic FRB population. ...

Intriguingly, the most likely implication of the new Arecibo finding – that the repeating FRB originates from a young extragalactic neutron star – is seemingly at odds with the results of a study published last week in Nature by another research team, where Bonn researchers were also involved. That paper suggested FRBs are related to cataclysmic events, such as short gamma-ray bursts, which cannot generate repeat events. Both findings together strongly imply that there are at least two different kinds of FRB sources. ...

A long time ago in a galaxy far, far away.... Radio Flashes For the first time astronomers have exactly pinpointed the location of a "fast radio burst" - a type of short-duration radio flash of unknown astrophysical origin - and have used this to identify its home galaxy. The galaxy, located over 3 billion light years away, is small, a so-called dwarf galaxy, and very different to our own Milky Way. Also, a persistent, compact radio source is close to the source of the bursts, which provides important insights into its astrophysical origin. ...

Fast Radio Bursts (FRBs) are visible for only a fraction of a second, and have puzzled astronomers since their discovery a decade ago. Precise localization of an FRB requires radio telescopes separated by large distances, which allow high resolution images to be made when these telescopes are used in combination with each other. Such follow-up observations were made possible with the first discovery of a repeating source of fast radio bursts, FRB 121102, using the 305-m Arecibo Radio Telescope in Puerto Rico, USA.

Prior to this discovery, astronomers had only indirect evidence that fast radio bursts come from far outside our Milky Way galaxy, because poor localization has prevented them from uniquely identifying their galaxy of origin. The new finding is critical because it has also allowed astronomers to precisely measure the distance to the source, and hence how much energy it is producing.

The Very Large Array in New Mexico, USA detected a total of nine radio bursts from FRB 121102. This determined its sky position to a fraction of an arc second, over 200 times more precise than previous measurements. ...

A Direct Localization of a Fast Radio Burst and Its Host - S. Chatterjee et al The Host Galaxy and Redshift of the Repeating Fast Radio Burst 121102 - S. P. Tendulkar et al The Repeating Fast Radio Burst 121102 as Seen on Milliarcsecond Angular Scales - B. Marcote et al
Last edited by bystander on Thu Jan 05, 2017 4:16 pm, edited 1 time in total.
Know the quiet place within your heart and touch the rainbow of possibility; be
alive to the gentle breeze of communication, and please stop being such a jerk. — Garrison Keillor
Top

Slartibartfast: Earthman, you must realize that the planet you lived on was commissioned, paid for and run by mice.

Arthur: When you say mice, do you mean the little furry white creatures with whiskers, ears, cheese?

Slartibartfast: Yeah, but they're protrusions into our dimension of hyper-intelligent beings. I don't know this cheese of which you speak, but they were there on Earth as mice experimenting on you.

Arthur: I see where you've become confused now. You see, *we* were experimenting on *them*.

Slartibartfast: Ah, no, well, yeah, no. That's what they wanted you to think, but you were actually elements in their computer program.

Arthur: Actually, this explains a lot. All my life I've had this strange feeling there's something big and sinister going on in the world.

Slartibartfast: No, that's normal paranoia. Everyone in the universe gets that.
Art Neuendorffer
Top

The animation shows 14 of the 15 detected bursts in succession, illustrating their dispersed spectrum and extreme variability. Capturing this diverse set of bursts was made possible by the broad bandwidth that can be processed by the Breakthrough Listen backend at the Green Bank Telescope.

Breakthrough Listen, an initiative to find signs of intelligent life in the universe, has detected 15 brief but powerful radio pulses emanating from a mysterious and repeating source – FRB 121102 – far across the universe.

Fast radio bursts are brief, bright pulses of radio emission from distant but largely unknown sources, and FRB 121102 is the only one known to repeat: more than 150 high-energy bursts have been observed coming from the object, which was identified last year as a dwarf galaxy about 3 billion light years from Earth.

Green Bank Telescope observations of a dwarf galaxy three billion light years away reveal 15 bursts of radio emission. This is the first time bursts from this source have been seen at these frequencies.

viewtopic.php?p=272466#p272466
Know the quiet place within your heart and touch the rainbow of possibility; be
alive to the gentle breeze of communication, and please stop being such a jerk. — Garrison Keillor
Top

If those bursts are from advanced technologers hopeing to contact humans they need to lower their expectations, not raise them.

While looking for signs of intelligent life in the universe, astronomers have detected 15 fast radio bursts from a distant galaxy.

These poorly understood phenomena are short pulses of radio emission, just milliseconds long, believed to be coming from rapidly spinning neutron stars or black holes in distant galaxies. A less popular theory is that they're signs of extremely powerful spacecraft from alien civilizations.

This particular fast radio burst (FRB), called FRB 121102, is of particular interest as it is the only known one to be repeating, something that astronomers can't yet explain.

Earlier this month, astronomers using the Green Bank Telescope in West Virginia (a collection of radio telescopes) not only found 15 more bursts, but found them at a higher radio frequency than was ever observed before, the astronomers said in their findings published in The Astronomer's Telegram.

"It's not surprising that we've found 15 more from this source; we've been detecting many of them over the past few years," Paul Scholz, an astronomer who studies FRBs with the Dominion Radio Astrophysical Observatory in Penticton, B.C., told CBC News. "The one thing that's unique about these [new ones] is that they are at a higher frequency than we've ever seen before."

Scholz, who was not involved with the new discovery, was with McGill University when he and a team of astronomers discovered FRB 121102 to be a repeater. In 2016, a McGill team was able to locate the source of the strange FRB.

At the time the signals left its host galaxy, Earth would have been two billion years old, less than half its current age. The only living things on the planet would have been single-celled organisms.

As though the object wasn't strange enough, it also behaves like no other FRB. Typically, objects that emit similar signals, such as pulsars, do so in a smooth fashion across many frequencies. But that's not the case with FRB 121102.

"So it's kind of perplexing," Scholz said.

Scholz said that there could be reasons such as the signal being distorted between its source galaxy and Earth.

In the coming months, a new telescope in B.C. called the Canadian Hydrogen Intensity Mapping Experiment (CHIME) is expected to begin its research into FRBs, with the possibility of discovering several a day, something that Scholz is looking forward to seeing.

"It's a mystery that needs to be solved," Scholz said.

Oops .. sorry, I missed this oppotunity, posted this same thing in another spot.

Really, if those signals are from advanced technology type beings they need to lower their expectations concerning us, instead of raising the frequency.
Top

Hi Guest poster "Wherever it fits"

I moved your post. If you could make an account next time so you can PM me when/if this happens, it'd be great.
Just call me "geck" because "zilla" is like a last name.
Top
7 posts • Page 1 of 1