Explanation: How massive can a normal star be? Estimates made from distance, brightness and standard solar models had given one star in the open cluster Pismis 24 over 200 times the mass of our Sun, making it one of the most massive stars known. This star is the brightest object located just above the gas front in the featured image. Close inspection of images taken with the Hubble Space Telescope, however, have shown that Pismis 24-1 derives its brilliant luminosity not from a single star but from three at least. Component stars would still remain near 100 solar masses, making them among the more massive stars currently on record. Toward the bottom of the image, stars are still forming in the associated emission nebula NGC 6357. Appearing perhaps like a Gothic cathedral, energetic stars near the center appear to be breaking out and illuminating a spectacular cocoon.

This is a golden oldie and still interesting.

I would like to quote Wikipedia regarding NGC 6357 as a whole:


Wikipedia wrote:
NGC 6357 is one of the most prominent sites of massive-star formation our neighborhood of the Milky Way. A variety of early O-type stars reside in this nebula, blowing the bubbles around the stars clusters that can be seen in the molecular cloud. 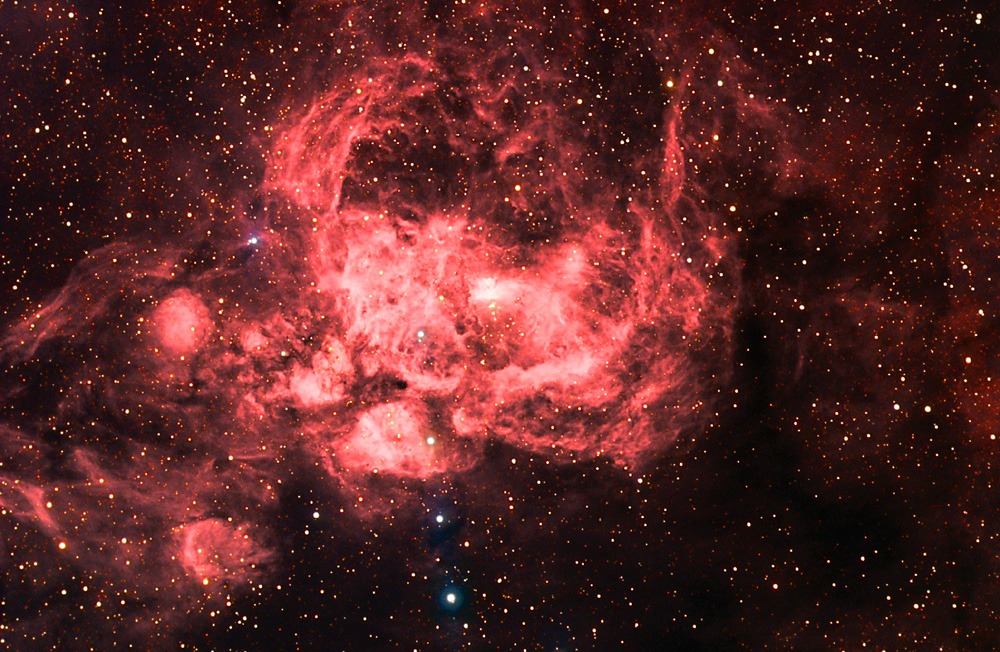 Cocoon Nebula. Photo: Fabian Neyer.
The nebula itself has the kind of torn and tattered appearance that I associate with truly massive star formation - just think of the Tarantula Nebula. Compare its hurricane-torn shape with the round, sedate little Cocoon nebula, home to only one massive star. Even the Orion Nebula looks well-behaved by comparison.

But Pismis 24-1, the brightest star in NGC 6357, is not the most massive star known in the Milky Way.


Wikipedia wrote:
Trumpler 16 is the home of WR 25, currently the most luminous star known in our Milky Way galaxy, together with the less luminous but more massive and famous Eta Carinae star system, and HD 93129A.

I've never seen this one before! It is SPECTACULAR!
Top The Guardian and Space.com called NGC 6357 the Lobster Nebula, and I find that figure easier to see than the dove and skull that are responsible for the nickname of War and Peace Nebula.
Top

The Guardian and Space.com called NGC 6357 the Lobster Nebula, and I find that figure easier to see than the dove and skull that are responsible for the nickname of War and Peace Nebula.

I think its name of War and Peace Nebula come from its appearance in the infrared?

Also I'd love to see a HST closeup of the filamentary part of the "paw" of NGC 6334.
Top

All the better to worship our Creator... The Universe... From whose elements and energies we are made of... Remember the APOD of the periodic table and where our elements come from?

Too bad the Universe is violent at times, but still has such beauty. We have to find the Peace Within... And stop the war with-out....

Fill your Universe with Love and Peace.

We are so small.
Why are the bottom left and right difraction spikes misaligned with all the others?
Top

tetrodehead wrote:We are so small.
Why are the bottom left and right difraction spikes misaligned with all the others?

Mixed datasets.
Just call me "geck" because "zilla" is like a last name.
Top

Well, it appears to be quite a busy place with stars blowing bubbles and all... Imagine our Solar System being in the midst of all that. I doubt that we'd last very long.
Top
9 posts • Page 1 of 1