The Colorful Clouds of Rho Ophiuchi

Explanation: The many spectacular colors of the Rho Ophiuchi (oh'-fee-yu-kee) clouds highlight the many processes that occur there. The blue regions shine primarily by reflected light. Blue light from the star Rho Ophiuchi and nearby stars reflects more efficiently off this portion of the nebula than red light. The Earth's daytime sky appears blue for the same reason. The red and yellow regions shine primarily because of emission from the nebula's atomic and molecular gas. Light from nearby blue stars - more energetic than the bright star Antares - knocks electrons away from the gas, which then shines when the electrons recombine with the gas. The dark brown regions are caused by dust grains - born in young stellar atmospheres - which effectively block light emitted behind them. The Rho Ophiuchi star clouds, well in front of the globular cluster M4 visible here on the upper right, are even more colorful than humans can see - the clouds emits light in every wavelength band from the radio to the gamma-ray.

Hmmmmmm...... Well, gee, what better way to get a message out there to be seen, than a huge DUST CLOUD!!!! You know like SOS on a deserted island in palms....

It's great to see a superb RGB nebula image as an APOD!

They are so rare these days.

The red and yellow regions shine primarily because of emission from the nebula's atomic and molecular gas.

That's not true. Well, it's certainly true that the red regions shine because of emission, but the same thing can't be said about the large yellow patch in the picture. This patch is simply a yellow reflection nebula, reflecting the yellow-orange (not red) light of Antares. Yellow reflection nebulas are rare, but Antares is bright and the vicinity is very dusty.

The large blue reflection nebula is produced by the small, tight group of B-type stars, of which Rho Ophiuchi itself, a B2V-type star, is the brightest. These stars are not hot enough to produce an emission nebula, but they are bright and blue, and so much of their blue light has been scattered all over that huge nebula that the stars themselves reportedly don't look blue-white through a telescope, but yellow-white. I don't know if that is true. By contrast, the bright stars of the Pleiades certainly look blue-white through a telescope even though they have spread out quite a bit of their blue light in their dusty surroundings, thereby producing that famous Pleiades nebula. (And by the way... why does the Sun look yellowish? It is at least partly because an appreciable amount of the shortwave sunlight that reaches the Earth has been scattered in the Earth's atmosphere.)

The red Hα emission in the Rho Ophiuchi region is interesting. There is not that much of it. The brightest Hα light is produced by Sigma Scorpii, an interesting spectroscopic binary whose components seem to be a bit of a mystery. According to Wikipedia, both components belong to spectral class B1 (Houk, Nancy (1978), Michigan catalogue of two-dimensional spectral types for the HD stars 4, Ann Arbor: Dept. of Astronomy, University of Michigan, and North, J. R.; et al. (September 2007), "Orbital solution and fundamental parameters of σ Scorpii", Monthly Notices of the Royal Astronomical Society 380 (3): 1276–1284, arXiv:0707.0897). But Jim Kaler describes them as spectral classes B2 and O9, and Simbad Astronomical Database calls them O9.5V and B7V.

In any case, it is clear that (at least one of) the components of Sigma Scorpii are right at the dividing line between spectral classes O and B. They are hot enough to ionize a nebula, but not a very bright or large one. The brightest, reddest of the emission nebula is a "wall" that has been built up as the wind from the stars drive gas and dust into a relatively dense dust cloud on one side of the binary, and the collision itself produces Hα emission. The stars also emit quite a lot of blue light, which is scattered as a blue reflection nebula. 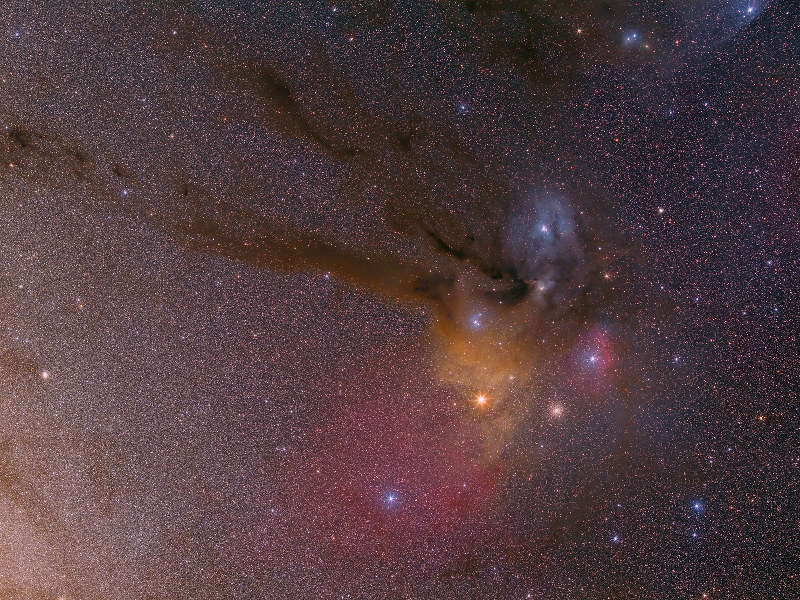 Rho Ophiuchi region. Photo: Marcin Paciorek.
There is one more red emission nebula in the picture, but its source can't be found in today's APOD. To find its source, check out the image at left by Marcin Paciorek. In Paciorek's image you can see a large, faint emission nebula to the lower left of Antares, and inside this nebula sits the blue star Tau Scorpii, whose spectral class (according to Simbad Astronomical database) is B0.2V. Don't you love the precision of the spectral classification?

Personally I love seeing Tau Scorpii in Rho Ophiuchi images, because I consider this star and its nebula a part of the entire nebula complex. But I sure love today's Tau Scorpii-less APOD, too!

And not Rho Ophiuchus.
Top

Very beautiful. Could be titled "Colorful Flower of Rho Orchiduchi" if there were a single orchid of all those colors. (Maybe your palate is "bouquet?")

A modern-day Darwin searching the jungles for a single orchid of that many colors would these days even stress the "Survival of the FitBit-est".

Thanks APOD! Very honored to have my image up there today

thank you for your nice comments on here!

In case anyone would be interested to know here are the processing details for this image: