Explanation: This skyscape features dusty Sharpless catalog emission region Sh2-155, the Cave Nebula. In the telescopic image, data taken through a narrowband filter tracks the reddish glow of ionized hydrogen atoms. About 2,400 light-years away, the scene lies along the plane of our Milky Way Galaxy toward the royal northern constellation of Cepheus. Astronomical explorations of the region reveal that it has formed at the boundary of the massive Cepheus B molecular cloud and the hot, young stars of the Cepheus OB 3 association. The bright rim of ionized hydrogen gas is energized by radiation from the hot stars, dominated by the brightest star above and left of picture center. Radiation driven ionization fronts are likely triggering collapsing cores and new star formation within. Appropriately sized for a stellar nursery, the cosmic cave is over 10 light-years across.

I am beginning to like APOD
Wolf Kotenberg
Top

Is it possible for New Horizons take a random picture of what may lie ahead ?
Wolf Kotenberg
Top

ta152h0 wrote:
Is it possible for New Horizons take a random picture of what may lie ahead ?

The HST has ~20 times the resolution of New Horizon's Long Range Reconnaissance Imager (LORRI) so for
Kuiper Belt object (KBO) out at 40+ AU NH has to be closer than 2 AU (300 million kilometers) to get a better view.

[b][color=#0000FF]The first two of the 20 observations (from ~0.75 AU) that New Horizons made of 1994 JR1 in April 2016. The moving features in the top left and far right are internal camera reflections (a kind of selfie) caused by illumination by a very bright star just outside of LORRI's field of view; the one on the left shows the three arms that hold up LORRI's secondary mirror.[/color][/b]

<<In April 2016, NASA's New Horizons spacecraft observed 1994 JR1, a 145-kilometer wide Kuiper Belt object (KBO) orbiting more than 5 billion kilometers from the sun, for the second time. Taken with the spacecraft's Long Range Reconnaissance Imager (LORRI) on April 7-8 from a distance of about 111 million kilometers, the images shatter New Horizons' own record for the closest-ever views of this KBO in November 2015, when New Horizons detected JR1 from 280 million kilometers away. Combining the November 2015 and April 2016 observations allows scientists to pinpoint the location of JR1 to within 1,000 kilometers, far better than any small KBO. The more accurate orbit also allows the science team to dispel a theory that JR1 is a quasi-satellite of Pluto. From the closer vantage point of the April 2016 observations, the team also determined the object's rotation period, observing the changes in light reflected from JR1's surface to determine that it rotates once every 5.4 hours (or a JR1 day). The observations are great practice for possible close-up looks at about 20 more ancient Kuiper Belt objects that may come in the next few years, should NASA approve an extended mission. 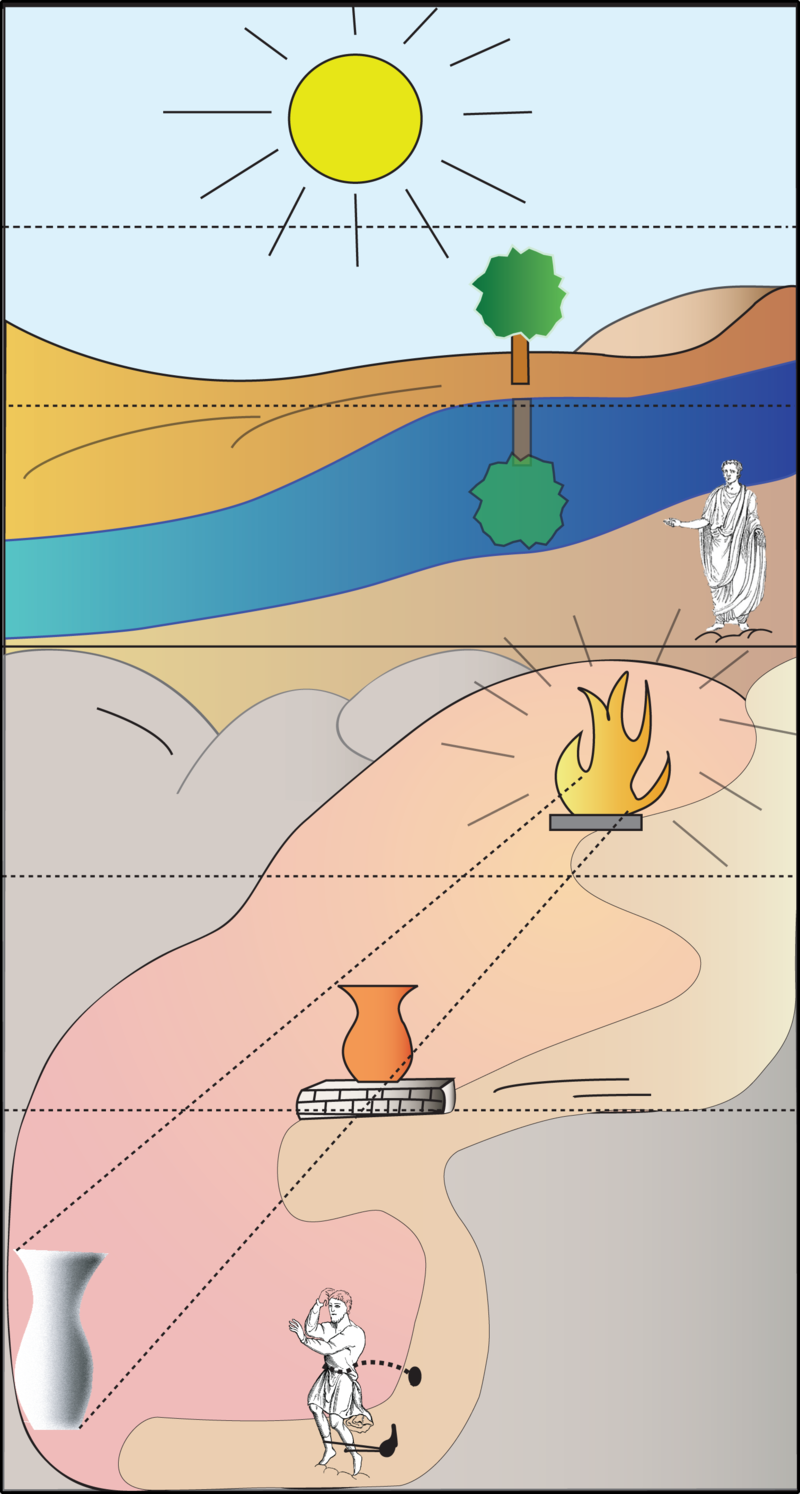 <<Plato begins by having Socrates ask Glaucon to imagine a cave where people have been imprisoned from birth. These prisoners are chained so that their legs and necks are fixed, forcing them to gaze at the wall in front of them and not look around at the cave, each other, or themselves. Behind the prisoners is a fire, and between the fire and the prisoners is a raised walkway with a low wall, behind which people walk carrying objects or puppets "of men and other living things". The people walk behind the wall so their bodies do not cast shadows for the prisoners to see, but the objects they carry do. The prisoners cannot see any of what is happening behind them, they are only able to see the shadows cast upon the cave wall in front of them. The sounds of the people talking echo off the walls, and the prisoners believe these sounds come from the shadows.

Socrates suggests that the shadows are reality for the prisoners because they have never seen anything else; they do not realize that what they see are shadows of objects in front of a fire, much less that these objects are inspired by real things outside the cave.

Plato then supposes that one prisoner is freed. This prisoner would look around and see the fire. The light would hurt his eyes and make it difficult for him to see the objects casting the shadows. If he were told that what he is seeing is real instead of the other version of reality he sees on the wall, he would not believe it. In his pain, Plato continues, the freed prisoner would turn away and run back to what he is accustomed to (that is, the shadows of the carried objects). He writes "... it would hurt his eyes, and he would escape by turning away to the things which he was able to look at, and these he would believe to be clearer than what was being shown to him."

Plato continues: "Suppose... that someone should drag him... by force, up the rough ascent, the steep way up, and never stop until he could drag him out into the light of the sun." The prisoner would be angry and in pain, and this would only worsen when the radiant light of the sun overwhelms his eyes and blinds him.

"Slowly, his eyes adjust to the light of the sun. First he can only see shadows. Gradually he can see the reflections of people and things in water and then later see the people and things themselves. Eventually, he is able to look at the stars and moon at night until finally he can look upon the sun itself ." Only after he can look straight at the sun "is he able to reason about it" and what it is.

Plato continues, saying that the freed prisoner would think that the world outside the cave was superior to the world he experienced in the cave; "he would bless himself for the change, and pity [the other prisoners]" and would want to bring his fellow cave dwellers out of the cave and into the sunlight.

The returning prisoner, whose eyes have become accustomed to the sunlight, would be blind when he re-enters the cave, just as he was when he was first exposed to the sun. The prisoners, according to Plato, would infer from the returning man's blindness that the journey out of the cave had harmed him and that they should not undertake a similar journey. Socrates concludes that the prisoners, if they were able, would therefore reach out and kill anyone who attempted to drag them out of the cave.>>

Technically this is a HaRGB image.