ANU is launching a search for a new planet in our Solar System, inviting anyone around the world with access to the Internet to help make the historic discovery.

Anyone who helps find the so-called Planet 9 will work with ANU astronomers to validate the discovery through the International Astronomical Union. ...

"We have the potential to find a new planet in our Solar System that no human has ever seen in our two-million-year history," said Dr Tucker from the ANU Research School of Astronomy and Astrophysics. ...

"Planet 9 is predicted to be a super Earth, about 10 times the mass and up to four times the size of our planet. It's going to be cold and far away, and about 800 times the distance between Earth and the sun. It's pretty mysterious," he said.

The ANU project will allow citizen scientists to use a website to search hundreds of thousands of images taken by the ANU SkyMapper telescope at Siding Spring. ...

viewtopic.php?t=35573
Know the quiet place within your heart and touch the rainbow of possibility; be
alive to the gentle breeze of communication, and please stop being such a jerk. — Garrison Keillor
Top

backyard-worlds-1st-discovery-flipbook_large[1].gif
The "flipbook" in which citizen scientists identified the new
brown dwarf, shown inside of the red circle. (Credit: NASA)
A new citizen-science tool released earlier this year to help astronomers pinpoint new worlds lurking in the outer reaches of our solar system has already led to a discovery: a brown dwarf a little more than 100 light years away from the Sun. Just six days after the launch of the Backyard Worlds: Planet 9 website in February, four different users alerted the science team to the curious object, whose presence has since been confirmed via an infrared telescope. ...

Days after the Backyard Worlds website debuted on February 15, Bob Fletcher, a science teacher in Tasmania, identified a very faint object moving across the WISE images. It was soon also flagged by three other citizen scientists from Russia, Serbia, and the United States. After some initial investigation by the research team, which originally called the object “Bob’s dwarf,” Faherty was awarded time on NASA's Infrared Telescope Facility in Hawaii, where she confirmed that it was a previously unknown brown dwarf just a few hundred degrees warmer than Jupiter. The authors say that sky surveys had missed this object because it’s too faint. All four volunteers are co-authors on the scientific paper announcing the discovery. ...


The First Brown Dwarf Discovered by the Backyard Worlds: Planet 9 Citizen Science Project - Marc J. Kuchner et al
You do not have the required permissions to view the files attached to this post.
Know the quiet place within your heart and touch the rainbow of possibility; be
alive to the gentle breeze of communication, and please stop being such a jerk. — Garrison Keillor
Top

Re: Backyard Worlds: Search for Planet 9

Mehh they have good eyes. I am impress. As for me, didnt find anything yet.
Top 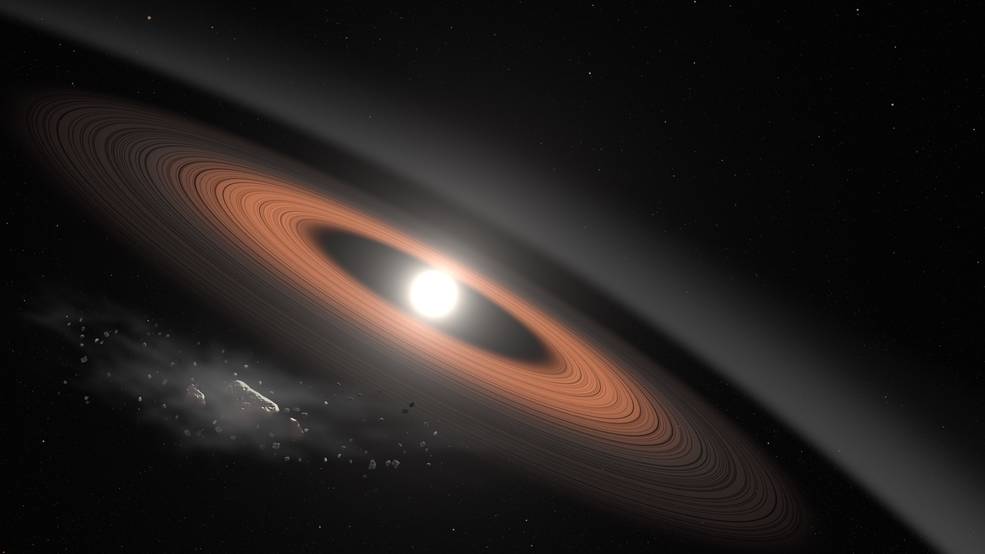 In this illustration, an asteroid (bottom left) breaks apart under the powerful gravity of LSPM J0207+3331, the oldest, coldest white dwarf known to be surrounded by a ring of dusty debris. Scientists think the system’s infrared signal is best explained by two distinct rings composed of dust supplied by crumbling asteroids. Credits: NASA/GSFC/Scott Wiessinger

The Backyard Worlds: Planet 9 project re-launches this week, with a call to volunteer citizen scientists to join the search for cold worlds near the Sun. With its newly revamped online interface and equipped with twice as much data as before, the project offers new opportunities to discover planets lurking yet unseen in the outer reaches of the Solar System (e.g., Planet 9, Planet X) as well as cold nearby “failed stars” (a.k.a. brown dwarfs). The re-launch coincides with the publication of the project’s latest discovery: a record-setting white dwarf star encircled by mysterious dusty rings that challenge astronomers to rethink the long-term evolution of planetary systems. ...

Alongside its re-launch, Backyard Worlds also announces its latest discovery, a surprising object unlike anything the team expected to find. Whereas most Backyard Worlds discoveries have been brown dwarfs, this newly published member of the solar neighborhood is a white dwarf – the faint, dense remnant of a stellar death long ago.

The white dwarf in question – LSPM J0207+3331, or J0207 for short – is unusually bright in WISE images, indicating that it’s encircled by a warm, dusty circumstellar disk. Such disks are thought to result from the ongoing breakup of small rocky planetesimals in orbit around the white dwarf. But with an age of roughly 3 billion years, J0207 is colder and nearly three times older than any other white dwarf known to harbor such a disk. ...

A 3 Gyr White Dwarf with Warm Dust Discovered via
the Backyard Worlds: Planet 9 Citizen Science Project ~ John H. Debes et al
Know the quiet place within your heart and touch the rainbow of possibility; be
alive to the gentle breeze of communication, and please stop being such a jerk. — Garrison Keillor
Top
4 posts • Page 1 of 1