STScI-H-p1731a-z1000x800[1].png
Artist's View of WASP-121b
The top of the planet's atmosphere is heated to a blazing 4,600 degrees
Fahrenheit (2,500 Celsius), hot enough to boil some metals.
llustration: NASA, ESA, and G. Bacon (STScI)
Science: NASA, ESA, and T. Evans (Exeter) et al
Scientists have discovered the strongest evidence to date for a stratosphere on a planet outside our solar system, or exoplanet. A stratosphere is a layer of atmosphere in which temperature increases with higher altitudes.

"This result is exciting because it shows that a common trait of most of the atmospheres in our solar system — a warm stratosphere — also can be found in exoplanet atmospheres," said Mark Marley, study co-author based at NASA's Ames Research Center in California's Silicon Valley. "We can now compare processes in exoplanet atmospheres with the same processes that happen under different sets of conditions in our own solar system."

Reporting in the journal Nature, scientists used data from NASA's Hubble Space Telescope to study WASP-121b, a type of exoplanet called a "hot Jupiter." Its mass is 1.2 times that of Jupiter, and its radius is about 1.9 times Jupiter's — making it puffier. But while Jupiter revolves around our sun once every 12 years, WASP-121b has an orbital period of just 1.3 days. This exoplanet is so close to its star that if it got any closer, the star's gravity would start ripping it apart. It also means that the top of the planet's atmosphere is heated to a blazing 4,600 degrees Fahrenheit (2,500 degrees Celsius), hot enough to boil some metals. The WASP-121 system is estimated to be about 900 light-years from Earth — a long way, but close by galactic standards. ...


Scientists have found the strongest evidence to date for a stratosphere on an enormous planet outside our solar system, with an atmosphere hot enough to boil iron.

An ultrahot gas-giant exoplanet with a stratosphere - Thomas M. Evans et al Detection of H2O and Evidence for TiO/VO in an Ultra-hot Exoplanet Atmosphere - Thomas M. Evans et al
You do not have the required permissions to view the files attached to this post.
Know the quiet place within your heart and touch the rainbow of possibility; be
alive to the gentle breeze of communication, and please stop being such a jerk. — Garrison Keillor
Top

Water Is Destroyed, Then Reborn in Ultrahot Jupiters 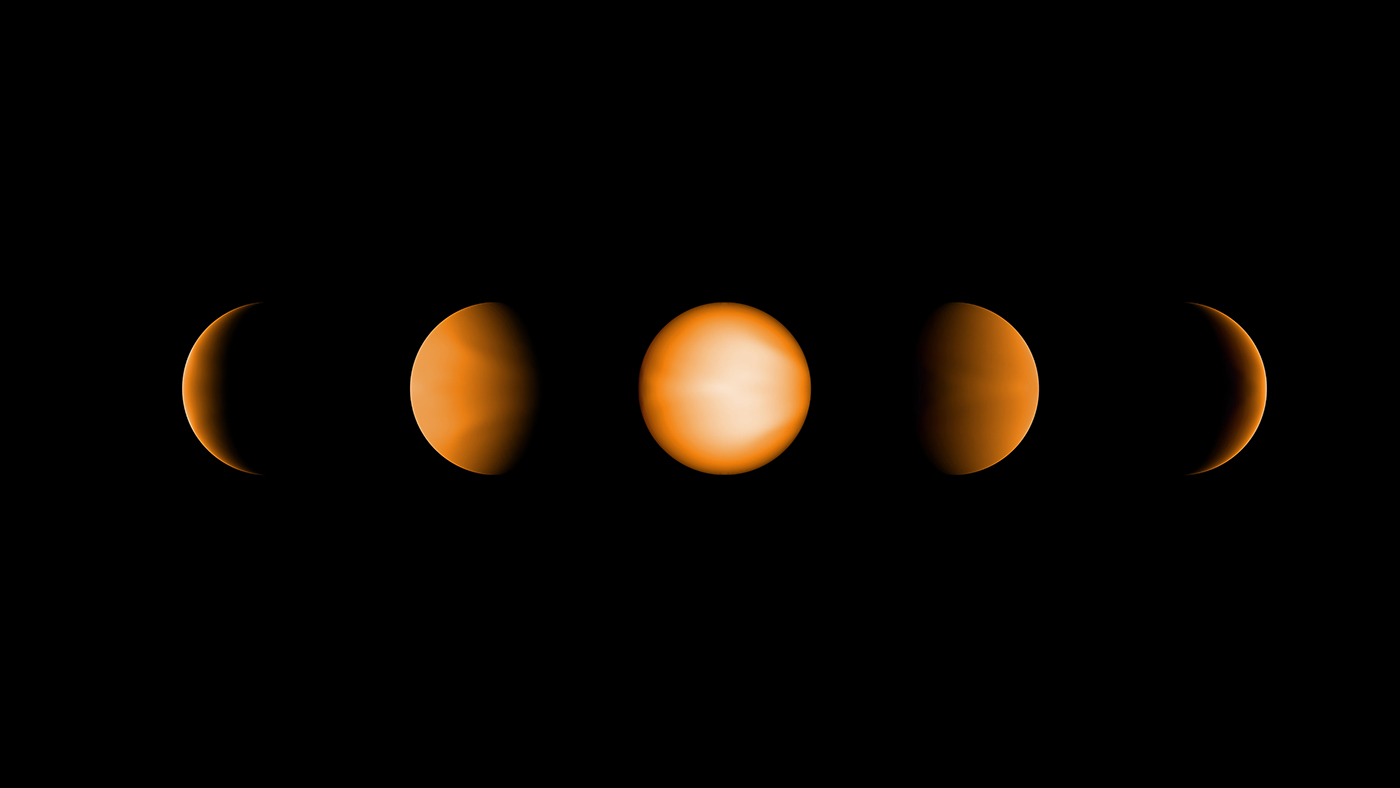 These simulated views of the ultrahot Jupiter WASP-121b show what the planet might look like to the human eye from five different vantage points, illuminated to different degrees by its parent star. The images were created using a computer simulation being used to help scientists understand the atmospheres of these ultra-hot planets. Credits: NASA/JPL-Caltech/Vivien Parmentier/Aix-Marseille University

Imagine a place where the weather forecast is always the same: scorching temperatures, relentlessly sunny, and with absolutely zero chance of rain. This hellish scenario exists on the permanent daysides of a type of planet found outside our solar system dubbed an "ultrahot Jupiter." These worlds orbit extremely close to their stars, with one side of the planet permanently facing the star.

What has puzzled scientists is why water vapor appears to be missing from the toasty worlds' atmospheres, when it is abundant in similar but slightly cooler planets. Observations of ultrahot Jupiters by NASA's Spitzer and Hubble space telescopes, combined with computer simulations, have served as a springboard for a new theoretical study that may have solved this mystery.

According to the new study, ultrahot Jupiters do in fact possess the ingredients for water (hydrogen and oxygen atoms). But due to strong irradiation on the planet's daysides, temperatures there get so intense that water molecules are completely torn apart. ...

While telescopes like Spitzer and Hubble can gather some information about the daysides of ultrahot Jupiters, the nightsides are difficult for current instruments to probe. The new paper proposes a model for what might be happening on both the illuminated and dark sides of these planets, based largely on observations and analysis of the ultrahot Jupiter known as WASP-121b, and from three recently published studies, coauthored by Parmentier, that focus on the ultrahot Jupiters WASP-103b, WASP-18b and HAT-P-7b, respectively. The new study suggests that fierce winds may blow the sundered water molecules into the planets' nightside hemispheres. On the cooler, dark side of the planet, the atoms can recombine into molecules and condense into clouds, all before drifting back into the dayside to be splintered again.

Ultra-Hot Jupiters Are Half Star, Half Planet
CNRS | via SpaceTime on tumblr | 2018 Aug 09

From Thermal Dissociation to Condensation in the Atmospheres
of Ultra Hot Jupiters: WASP-121b in Context - Vivien Parmentier et al
Know the quiet place within your heart and touch the rainbow of possibility; be
alive to the gentle breeze of communication, and please stop being such a jerk. — Garrison Keillor
Top
2 posts • Page 1 of 1