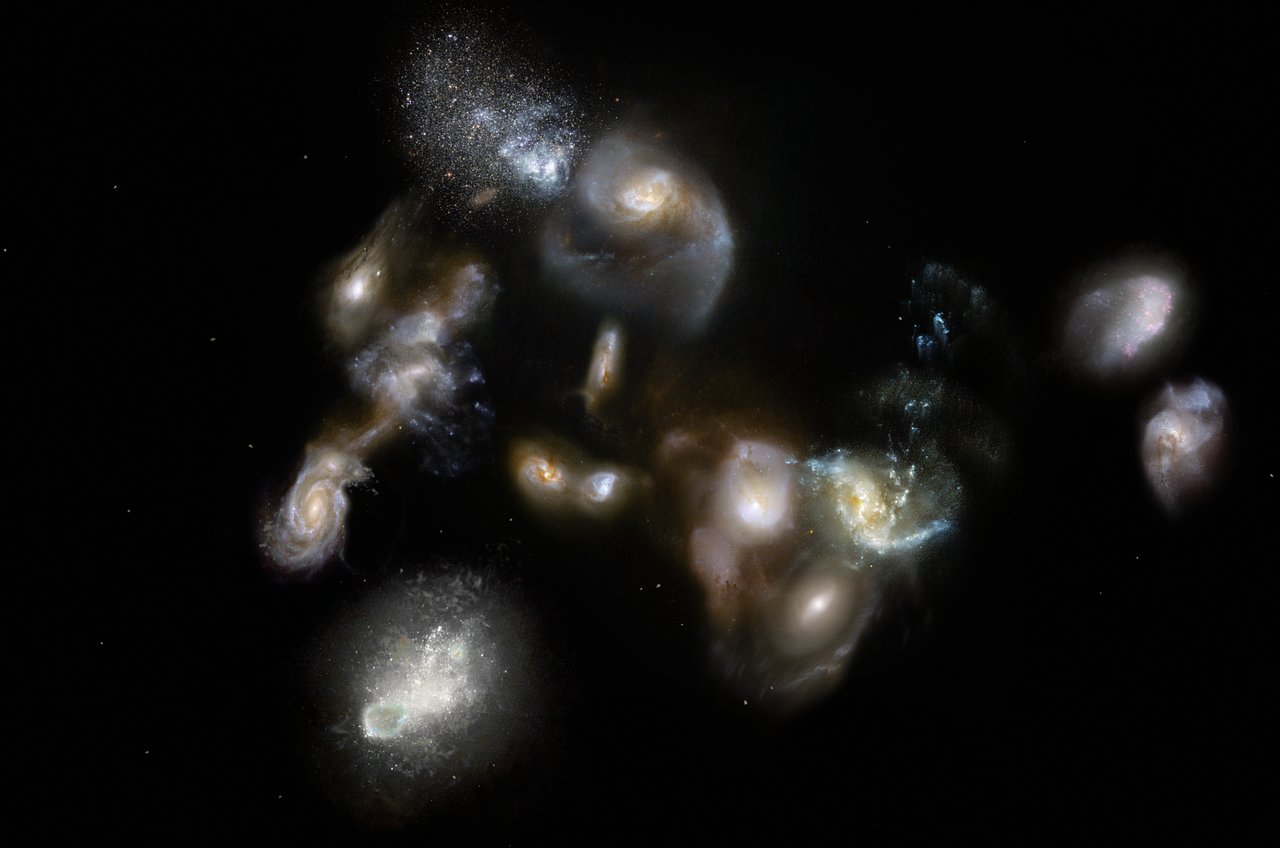 This artist’’s impression of SPT2349-56 shows a group of interacting and merging galaxies in the early Universe. (Credit: ESO/M. Kornmesser)

The ALMA and APEX telescopes have peered deep into space — back to the time when the Universe was one tenth of its current age — and witnessed the beginnings of gargantuan cosmic pileups: the impending collisions of young, starburst galaxies. Astronomers thought that these events occurred around three billion years after the Big Bang, so they were surprised when the new observations revealed them happening when the Universe was only half that age! These ancient systems of galaxies are thought to be building the most massive structures in the known Universe: galaxy clusters.

Using the Atacama Large Millimeter/submillimeter Array (ALMA) and the Atacama Pathfinder Experiment (APEX), two international teams of scientists led by Tim Miller from Dalhousie University in Canada and Yale University in the US and Iván Oteo from the University of Edinburgh, United Kingdom, have uncovered startlingly dense concentrations of galaxies that are poised to merge, forming the cores of what will eventually become colossal galaxy clusters. ...

These forming galaxy clusters were first spotted as faint smudges of light, using the South Pole Telescope and the Herschel Space Observatory. Subsequent ALMA and APEX observations showed that they had unusual structure and confirmed that their light originated much earlier than expected — only 1.5 billion years after the Big Bang. ...

A massive core for a cluster of galaxies at a redshift of 4.3 - T. B. Miller et al An Extreme Protocluster of Luminous Dusty Starbursts in the Early Universe - I. Oteo et al
Last edited by bystander on Wed Apr 25, 2018 6:35 pm, edited 1 time in total.
Know the quiet place within your heart and touch the rainbow of possibility; be
alive to the gentle breeze of communication, and please stop being such a jerk. — Garrison Keillor
Top
1 post • Page 1 of 1