Explanation: Why would the shadow of a space shuttle launch plume point toward the Moon? In early 2001 during a launch of Atlantis, the Sun, Earth, Moon, and rocket were all properly aligned for this photogenic coincidence. First, for the space shuttle's plume to cast a long shadow, the time of day must be either near sunrise or sunset. Only then will the shadow be its longest and extend all the way to the horizon. Finally, during a Full Moon, the Sun and Moon are on opposite sides of the sky. Just after sunset, for example, the Sun is slightly below the horizon, and, in the other direction, the Moon is slightly above the horizon. Therefore, as Atlantis blasted off, just after sunset, its shadow projected away from the Sun toward the opposite horizon, where the Full Moon happened to be.

Thanks for the nice image!
Also there probably has to be some sort of dust within the layer of atmosphere where the shadow becomes visible. Its density drops while the rocket gains altitude and the shadow fades out.
Top

Is this thought actually correct?:
The shadow can be followed "beyond" the moon, which means the image must have been recorded after full moon. Only at full moon the shadow would be pointing very close to the moon and onto the moon during an ecilipse.
Thank you
Top

I suppose if the Shuttle still takes off shortly after sunset but the Moon was waxing gibbous, the shadow would still point to the Moon except it would be shorter because the Moon would be a bit higher up above the horizon. Even at third quarter the Moon would cut the shadow in half. Or is it first quarter and the launch is at sunrise? I always am confused which of the quarter moons are visible during the day. I wonder with hundreds of shuttle launches there were other sunset launches with the Moon in different positions? Then again was there a time when the planet Mars was in the right place for the shadow to point to it? Hmmm, that would be a clever headline, space shuttle launch shadow points longingly to Mars.
Top

I've never seen it before today, and I was very happy indeed to see such a remarkable photograph!
Top 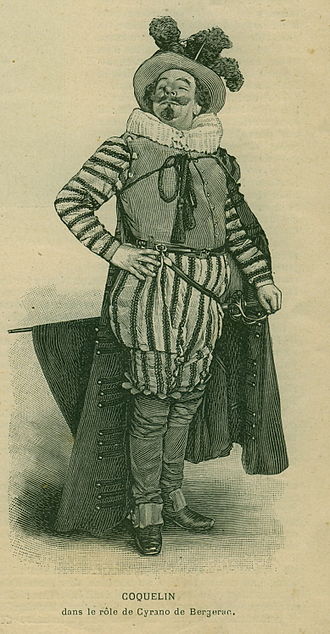 https://en.wikipedia.org/wiki/Cyrano_de_Bergerac wrote:
<<Savinien de Cyrano de Bergerac (6 March 1619 – 28 July 1655) was a French novelist, playwright, epistolarian and duelist. Cyrano's short life is poorly documented. Certain significant chapters of his life are only known from the Preface to the Histoire Comique par Monsieur de Cyrano Bergerac, Contenant les Estats & Empires de la Lune (Comical History of the States and Empires of the Moon) published in 1657, nearly two years after his death. John Shirley published a story about Cyrano called "Cyrano and the Two Plumes" in a French anthology; it was reprinted at The Freezine of Fantasy and Science Fiction.>>

De Guiche: Where has this man dropped from?

Cyrano: (sitting up, and speaking broadly, with a Gascon accent) From the moon!

Cyrano: Like a bomb, I fell from the moon!

Cyrano: (rising, in a terrible voice) From the moon!

Cyrano: (walking up to him) And yet I didn’t fall metaphorically!...

Cyrano: It was a hundred years, or a moment,
- I don’t know how long it lasted, that descent! -
I was inside a ball the colour of saffron!
Art Neuendorffer
Top

The shadow appears too straightfor the dispersing rocket plume.