NRAO/GBO: Einstein Gets It Right Again

NRAO/GBO: Einstein Gets It Right Again


Einstein Gets It Right Again

Harnessing the exquisite sensitivity of the National Science Foundation’s Green Bank Telescope (GBT), astronomers have given one of Einstein’s predictions on gravity its most stringent test yet. By precisely tracking the meanderings of three stars in a single system – two white dwarf stars and one ultra-dense neutron star – the researchers determined that even phenomenally compact neutron stars “fall” in the same manner as their less-dense counterparts, an aspect of nature called the "Strong Equivalence Principle". 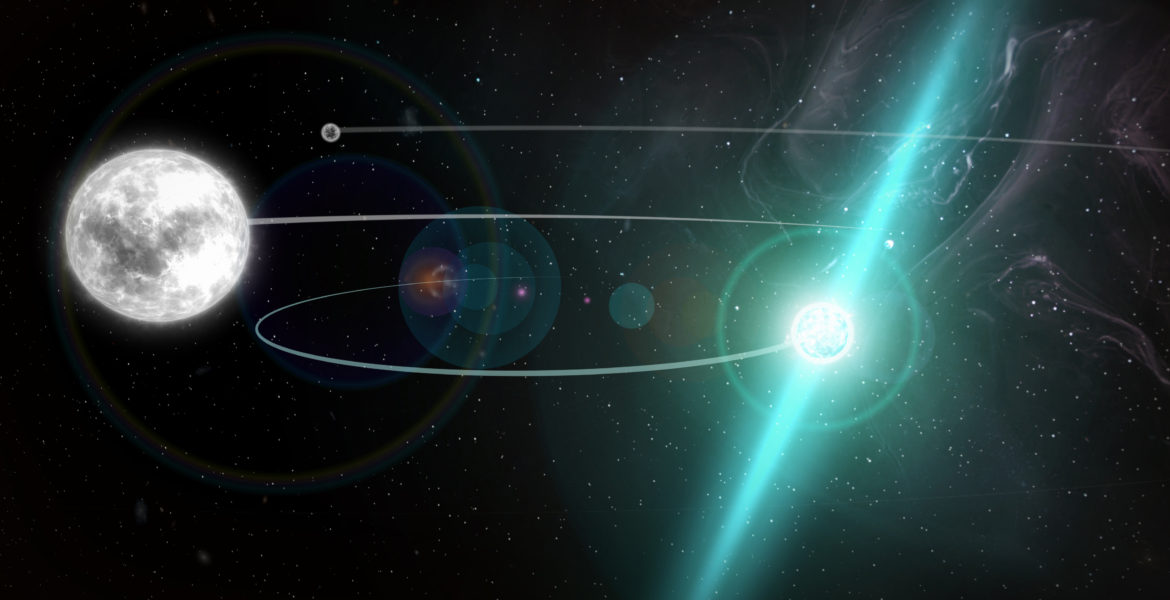 Artist impression of the triple star system PSR J0337+1715, which is located about 4,200 light-years from Earth. This system provides a natural laboratory to test fundamental theories of gravity. Credit: NRAO/AUI/NSF; S. Dagnello

Einstein’s understanding of gravity, as outlined in his general theory of relativity, predicts that all objects fall at the same rate, regardless of their mass or composition. This theory has passed test after test here on Earth, but does it still hold true for some of the most massive and dense objects in the known universe, an aspect of nature known as the Strong Equivalence Principle? An international team of astronomers has given this lingering question its most stringent test ever. Their findings, published in the journal Nature, show that Einstein’s insights into gravity still hold sway, even in one of the most extreme scenarios the Universe can offer.

Take away all air, and a hammer and a feather will fall at the same rate – a concept explored by Galileo in the late 1500s and famously illustrated on the Moon by Apollo 15 astronaut David Scott.

Though a bedrock of Newtonian physics, it took Einstein’s theory of gravity to express how and why this is so. To date, Einstein’s equations have passed all tests, from careful laboratory studies to observations of planets in our solar system. But alternatives to Einstein’s general theory of relativity predict that compact objects with extremely strong gravity, like neutron stars, fall a little differently than objects of lesser mass. That difference, these alternate theories predict, would be due to a compact object’s so-called gravitational binding energy — the gravitational energy that holds it together. ...

Universality of Free Fall from the Orbital Motion of a Pulsar in a Stellar Triple System - Anne M. Archibald et al
Know the quiet place within your heart and touch the rainbow of possibility; be
alive to the gentle breeze of communication, and please stop being such a jerk. — Garrison Keillor
Top
1 post • Page 1 of 1