In the early morning of September 15, Comet 21P/Giacobini-Zinner could be seen cruising in front of open star cluster M35 in Gemini. To its lower right is another fine cluster, NGC 2158.

Attaching a single frame taken as part of the video seen here: http://www.pbase.com/wjshaheen/image/168126991/original

Copyright William J. Shaheen
You do not have the required permissions to view the files attached to this post.
Top

This large beautiful planetary nebula can be found in the constellation Fornax. Its common name, “The Robin’s Egg Nebula” describes the object perfectly. It looks like a Robins egg floating in space. NGC 1360 is a typical evolved planetary nebula. The term evolved means “aging”, and that the planetary nebula does not contain any obvious shell morphology. Contrasting this, if you compare this with another planetary nebula, i.e., “The Skull Nebula” you will find defined well-marked boundaries and symmetry present in younger Planetary Nebula (PN). NGC 1360 is fairly diffuse and showing areas interacting with the interstellar medium.

The interesting colour is caused by the excitation of oxygen from its hot central star. In fact, the central star is known to be a binary star system consisting of two evolved white dwarf stars.

Reddish jet like glows located along the longer axis are believed to have been ejected from the original star before its final collapse. In time, everything will fade, with just the white dwarf in the centre remaining. It will take several billion years to finally cool off. 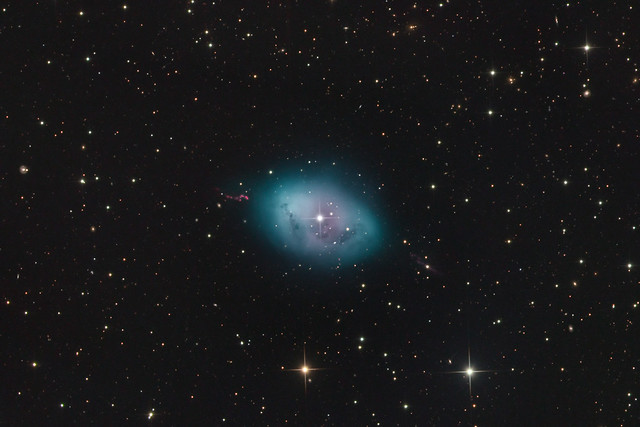 The great planet parade of 2018
Jupiter, Saturn and Mars were all prominent in southern skies this year, each approaching Earth in turn between May and July. This is a collection of one image per month between March and September to show each planet getting larger on approach, then shrinking as it moves away, as well as many changing features on each. Phases show as Earth moves from one side to the other of the Sun in relation to each planet. For Jupiter, it's the ever-changing storms, with interesting activity near the Great Red Spot this year (the South Tropical Disturbance). The equatorial region has got progressively redder through the season, and Ganymede has photobombed twice! For Saturn, we've seen the brightest high latitude storms since 2011, first appearing in April. Mars has had it's closest opposition in 15 years, and apart from the dramatic change in size as it approached, a global dust storm quickly blanketed the planet in May, hiding all the usual darker markings, which have slowly reappeared as the planet went through opposition. The south polar cap has been shrinking as Mars headed into southern summer and perihelion this month.

All images taken with a C14 & ASI290MM camera from Sydney, Australia.

The shots cover a period from August 13th to September 13th and the subject in question, or rather the subjects in question, are respectively the NGC 7331 and the Stephan's Quintet.

The data can be found in the info on Flickr. 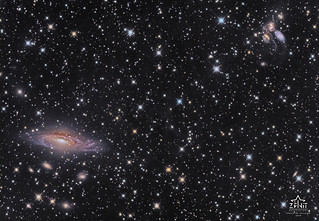 Shown here is my attempt to image the very difficult Einstein Cross. The cross itself is a Quasar, 8 Billion light year's distant, having its light bent into 4 points by the foreground galaxy's gravity (400 million light year's distance). This is visual proof of Einstein's theory about gravity being able to bend light. What you see here has also been simulated mathematically and it expected.

Unfortunately the cross is only 1.6" in diameter. With the CDK24, I have a 2 micron spot size (assuming perfect seeing) on 9 micron pixels with 0.47" per pixel. With an 0.2" RMS max tracking error, I should be able to see the cross. But my best 16 300-sec luminance subs were around 2" seeing. Thus the "cross" stars overlap as you see here.

I'd need less than 1" seeing to clearly see the cross. But that is very rare with my exposure times and 4,200' altitude. I think I'd need to resort to planetary techniques to see this. That is, a CMOS video camera with magnification and <1 second subs. The best subs with a very short exposure should be less than 1" seeing (i.e., Lucky Imaging). I assume I'd need hundreds or thousands of exposures to do it. Looking forward to doing this in the future when the new hi-res CMOS cameras are available.

The Propeller Galaxy (NGC 7479) is a barred spiral galaxy located about 105 million light-years away from Earth in the northern constellation of Pegasus, while it is racing away from us at some 2381 kilometers per second.

It has a very asymmetric spiral structure with a bright, long bar. Its tightly wound arms create an inverted ‘S’, as they spin in an anticlockwise direction. However, at radio wavelengths, it spins the other way, with a jet of radiation that bends in the opposite direction to the stars and dust in the arms of the galaxy.

This radio jet in the Propeller Galaxy was probably put into its bizarre backwards spin by a recent minor merger with another galaxy.

Star formation is reignited by galactic collisions, and indeed NGC 7479 is undergoing starburst activity, with many bright, young stars visible in the spiral arms and disk. The brightest stars in this image, however, are foreground stars.

NGC 7479 is also classified as a Seyfert galaxy, a galaxy with an extremely bright, active galactic nucleus (AGN), that contains a supermassive black hole.

Two supernovae occurred in the Propeller Galaxy: SN 1990U that reached mag 16, was discovered on July 27, 1990, and SN 2009jf with a maximum brightness of mag 15, was discovered on September 27,2009 by the Lick Observatory Supernova Search. 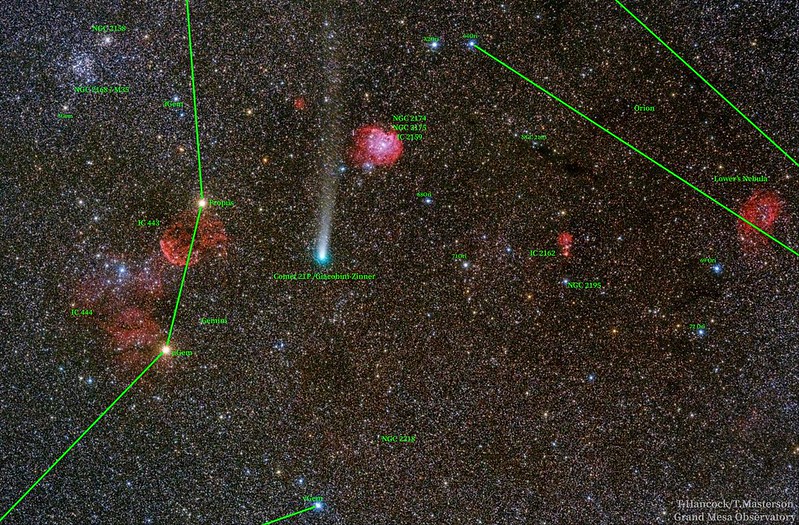 Comet 21P G/Z Between Gemini and Orion (annotated) by Transient Astronomer, on Flickr 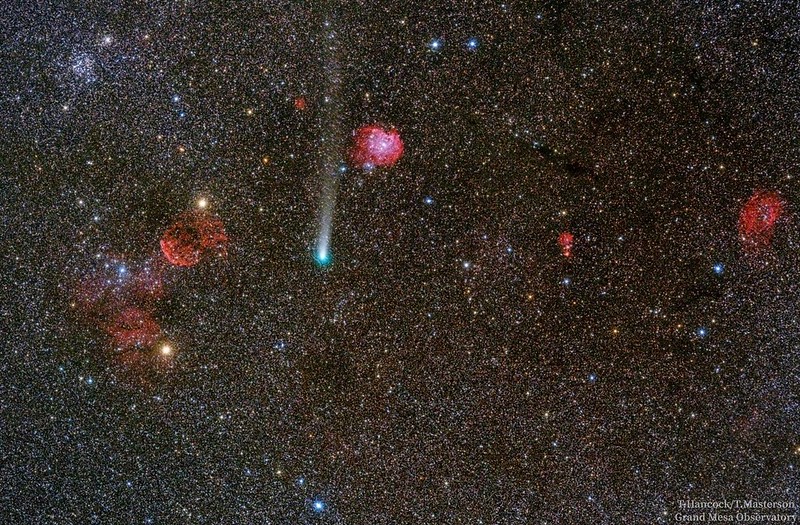 Comet 21P G/Z Between Gemini and Orion by Transient Astronomer, on Flickr

2 stacks for each serie : one on stars, the other one on the comet (with Pixinsight)
Final mix with Photoshop

The Coma II Group (or NGC4725 group), sub-group of Coma-Sculptor Group.
NGC4725 is the dominant galaxy of the Group ; a Seyfert galaxy with active nucleus, distant of 40 millions LY. Its classification is barred-spiral, but has the peculiarity to have only one spiral arm.

NGC4725ApodSmall.jpg
This is a Re-Process of this objects data.
The first night I shot the luminance for this object I knew it was going to be a fun image. The resolution was just so noticeable(SBIG AOx Adaptive optics unit was used), I could not wait to download the images and start processing it. With 5 full nights of excellent seeing and transparency the data was collected. Only the best sub exposures were used. Nice tidal tail features of NGC 4725
NGC 4725 Is a spiral Galaxy much like our own milky way, but this spiral only has one very large arm that seems to wind counter clock wise out from the prominent bluish ring of newborn star clusters and Ha star forming regions. The yellowish dust lanes populated by older stars and obscuring the central bar structure. NGC 4725 is over 100 thousand light-years across and lies 41 million light-years away in the constellation Coma Berenices.

I tried to capture my bit of the Giacobini-Zinner comet. Little did I expect that there was another visitor getting all the attention.That's what I call photobombing on a cosmic scale.

769981_quake.jpg
decam-earthquake-2.jpg
An image of the sky in the constellation of Pegasus taken on Sept 6, 2018 during a 5.8 magnitude earthquake in Chile. The earthquake struck during the middle of the 120 sec exposure, which resulted in the telescope losing tracking due to the shaking. The images of the resulting star trails therefore record the event like a strip-chart recorder. The vertical vibrations by the telescope reach an amplitude of about 60 arcseconds. This image was taken using the Dark Energy Camera on the 4-meter Blanco Telescope at the Cerro Tololo Inter-American Observatory by the Dark Energy Camera Legacy Survey Team. The telescope and camera were being operated by Alberto Alvarez and Dr. Zachary Slepian.