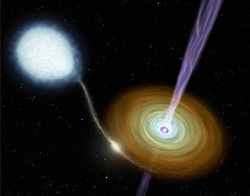 
How close can a star get to a neutron star? The answer is, extremely close. An interesting binary star system called IGR J17062-6143 was discovered about 10 years ago by the INTEGRAL high energy space laboratory due to its strong, variable high energy emission. Subsequent studies of this source using the Rossi X-ray Timing Explorer and the Neil Gehrels Swift Observatory revealed that this source contains a neutron star which is accreting material from a low-mass companion star. X-ray pulsations produced by hot spots on the neutron star show that it has an extremely rapid rotation, spinning more than 163 times per second. New observations of this system with the NICER neutron star observatory on the International Space Station have helped to measure the binary orbit. Because of orbital motion, the travel time for a pulse of X-rays from the neutron star to reach earth varies by a small amount. The X-ray pulses take a tiny bit less time to reach earth when the neutron star is closer to earth in its orbit than they do when the neutron star is farthest from earth. This variation in time is only about 8 milliseconds, but it is an amount NICER is easily capable of measuring. From this tiny variation in the X-ray pulse arrival times, astronomers have determined that the two stars in IGR J17062-6143 revolve in a circular orbit with an orbital period of only 38 minutes. This is the shortest orbital period known for any such accreting millisecond X-ray pulsar binary system. This short period means that the stars in the system are very near each other. In fact, the two stars in IGR J17062-6143 are separated by only 186,000 miles, so that the entire binary system would fit within the separation between the earth and the moon. The small separation means that the donor star cannot be a small normal star, but is instead a tiny white dwarf star, with a mass of only about 1.5 percent of the sun's mass. The image above shows an illustration of the accretion from the white dwarf into an accretion disk then onto the neutron star, while the inset graph shows the variation in the time delay due to orbital motion. Despite its tiny nature, the mass lost from the white dwarf companion has a big effect. Every once in a while, enough helium-rich material collects on the surface of the neutron star to generate a gigantic thermonuclear explosion - the equivalent of one hundred 15 megaton bombs exploding over every square centimeter of the neutron star.