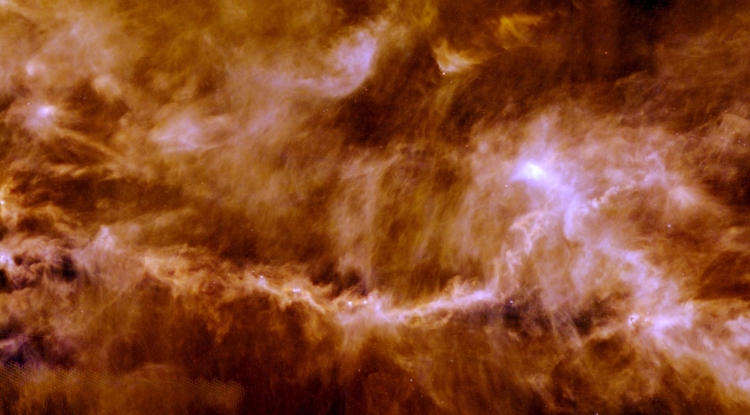 The Taurus Molecular Cloud, pictured here by ESA's Herschel Space Observatory, is a star-forming region about 450 light-years away. The image frame covers roughly 14 by 16 light-years and shows the glow of cosmic dust in the interstellar material that pervades the cloud, revealing an intricate pattern of filaments dotted with a few compact, bright cores — the seeds of future stars. (Image: ESA/Herschel/PACS, SPIRE/Gould Belt survey Key Programme/Palmeirim et al. 2013)

"Super-Earths" and Neptune-sized planets could be forming around young stars in much greater numbers than scientists thought, new research by an international team of astronomers suggests.

Observing a sampling of young stars in a star-forming region in the constellation Taurus, researchers found many of them to be surrounded by structures that can best be explained as traces created by invisible, young planets in the making. The research, published in the Astrophysical Journal, helps scientists better understand how our own solar system came to be.

Some 4.6 billion years ago, our solar system was a roiling, billowing swirl of gas and dust surrounding our newborn sun. At the early stages, this so-called protoplanetary disk had no discernible features, but soon, parts of it began to coalesce into clumps of matter -- the future planets. As they picked up new material along their trip around the Sun, they grew and started to plow patterns of gaps and rings into the disk from which they formed. Over time, the dusty disk gave way to the relatively orderly arrangement we know today, consisting of planets, moons, asteroids and the occasional comet.

Scientists base this scenario of how our solar system came to be on observations of protoplanetary disks around other stars that are young enough to currently be in the process of birthing planets. Using the Atacama Large Millimeter Array, or ALMA, comprising 45 radio antennas in Chile’s Atacama Desert, the team performed a survey of young stars in the Taurus star-forming region, a vast cloud of gas and dust located a modest 450 light-years from Earth. When the researchers imaged 32 stars surrounded by protoplanetary disks, they found that 12 of them -- 40 percent -- have rings and gaps, structures that according to the team’s measurements and calculations can be best explained by the presence of nascent planets. ...


Gaps and Rings in an ALMA Survey of Disks in the Taurus Star-Forming Region ~ Feng Long et al
Know the quiet place within your heart and touch the rainbow of possibility; be
alive to the gentle breeze of communication, and please stop being such a jerk. — Garrison Keillor
Top
1 post • Page 1 of 1