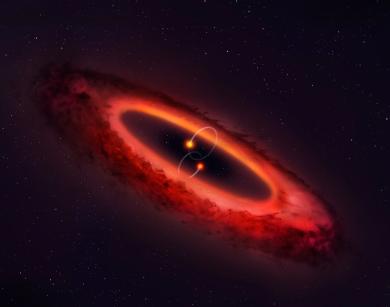 New research led by an astronomer at the University of Warwick has found the first confirmed example of a double star system that has flipped its surrounding disc to a position that leaps over the orbital plane of those stars. The international team of astronomers used the Atacama Large Millimeter/sub-millimeter Array (ALMA) to obtain high-resolution images of the Asteroid belt-sized disc.

The overall system presents the unusual sight of a thick hoop of gas and dust circling at right angles to the binary star orbit. Until now this setup only existed in theorists’ minds, but the ALMA observation proves that polar discs of this type exist, and may even be relatively common. ...

Dr Kennedy and his fellow researchers used ALMA to pin down the orientation of the ring of gas and dust in the system. The orbit of the binary was previously known, from observations that quantified how the stars move in relation to each other. By combining these two pieces of information they were able to establish that the dust ring was consistent with a perfectly polar orbit. This means that while the stellar orbits orbit each other in one plane, like two horses going around on a carousel, the disc surrounds these stars at right angles to their orbits, like a giant ferris wheel with the carousel at the centre. ...


A circumbinary protoplanetary disk in a polar configuration ~ Grant M. Kennedy et al
Know the quiet place within your heart and touch the rainbow of possibility; be
alive to the gentle breeze of communication, and please stop being such a jerk. — Garrison Keillor
Top

The seasonal weather on planets in such systems might be quite interesting. Both poles of a planet might experience summers at the same time!

Bruce
Just as zero is not equal to infinity, everything coming from nothing is illogical.
Top
2 posts • Page 1 of 1