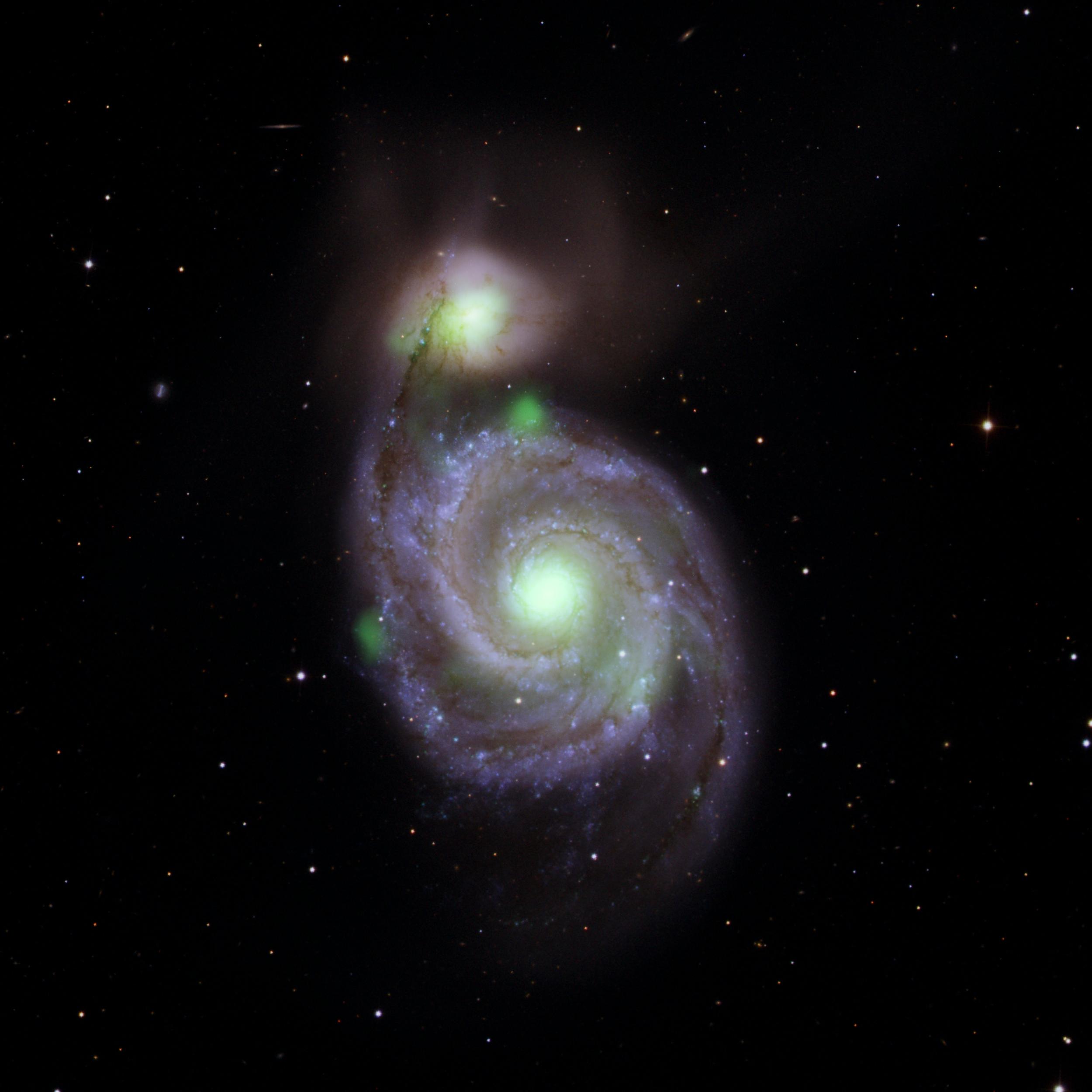 Bright green sources of high-energy X-ray light captured by NASA's NuSTAR mission are overlaid on an optical-light image of the Whirlpool galaxy (in the center of the image) and its companion galaxy, M51b (the bright greenish-white spot above the Whirlpool), taken by the Sloan Digital Sky Survey. Credit: NASA/JPL-Caltech, IPAC

In the nearby Whirlpool galaxy and its companion galaxy, M51b, two supermassive black holes heat up and devour surrounding material. These two monsters should be the most luminous X-ray sources in sight, but a new study using observations from NASA's NuSTAR (Nuclear Spectroscopic Telescope Array) mission shows that a much smaller object is competing with the two behemoths.

The most stunning features of the Whirlpool galaxy — officially known as M51a — are the two long, star-filled "arms" curling around the galactic center like ribbons. The much smaller M51b clings like a barnacle to the edge of the Whirlpool. Collectively known as M51, the two galaxies are merging.

At the center of each galaxy is a supermassive black hole millions of times more massive than the Sun. The galactic merger should push huge amounts of gas and dust into those black holes and into orbit around them. In turn, the intense gravity of the black holes should cause that orbiting material to heat up and radiate, forming bright disks around each that can outshine all the stars in their galaxies.

But neither black hole is radiating as brightly in the X-ray range as scientists would expect during a merger. Based on earlier observations from satellites that detect low-energy X-rays, such as NASA's Chandra X-ray Observatory, scientists believed that layers of gas and dust around the black hole in the larger galaxy were blocking extra emission. But the new study, published in the Astrophysical Journal, used NuSTAR's high-energy X-ray vision to peer below those layers and found that the black hole is still dimmer than expected. ...


A Long Hard-X-Ray Look at the Dual Active Galactic Nuclei of M51 with NuSTAR ~ M. Brightman et al
Know the quiet place within your heart and touch the rainbow of possibility; be
alive to the gentle breeze of communication, and please stop being such a jerk. — Garrison Keillor
Top
1 post • Page 1 of 1