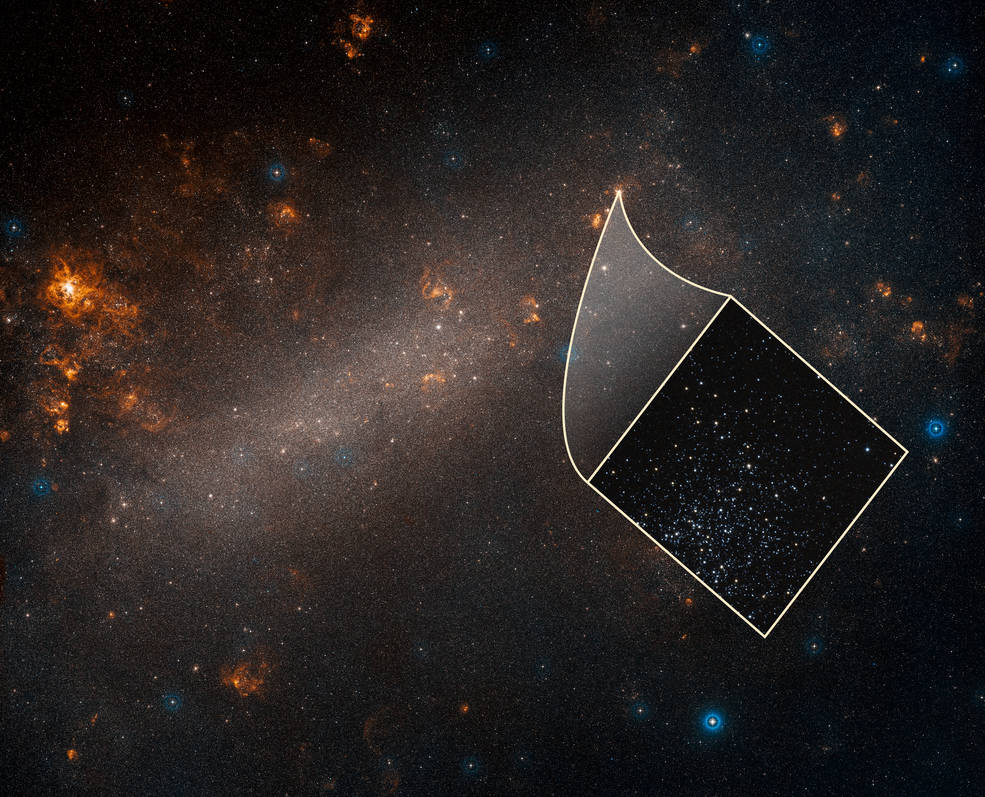 This is a ground-based telescope’s view of the Large Magellanic Cloud, a satellite galaxy of our Milky Way. The inset image, taken by the Hubble Space Telescope, reveals one of many star clusters scattered throughout the dwarf galaxy. (Credit: NASA, ESA, Adam Riess, and Palomar Digitized Sky Survey)

New measurements from NASA’s Hubble Space Telescope confirm that the Universe is expanding about 9% faster than expected based on its trajectory seen shortly after the big bang, astronomers say.

The new measurements, published April 25 in Astrophysical Journal, reduce the chances that the disparity is an accident from 1 in 3,000 to only 1 in 100,000 and suggest that new physics may be needed to better understand the cosmos. ...

In this study, Riess and his SH0ES (Supernovae, H0, for the Equation of State) Team analyzed light from 70 stars in our neighboring galaxy, the Large Magellanic Cloud, with a new method that allowed for capturing quick images of these stars. The stars, called Cepheid variables, brighten and dim at predictable rates that are used to measure nearby intergalactic distances.

The usual method for measuring the stars is incredibly time-consuming; the Hubble can only observe one star for every 90-minute orbit around Earth. Using their new method called DASH (Drift And Shift), the researchers using Hubble as a “point-and-shoot” camera to look at groups of Cepheids, thereby allowing the team to observe a dozen Cepheids in the same amount of time it would normally take to observe just one.

With this new data, Riess and the team were able to strengthen the foundation of the cosmic distance ladder, which is used to determine distances within the Universe, and calculate the Hubble constant, a value of how fast the cosmos expands over time. ...

Large Magellanic Cloud Cepheid Standards Provide a 1% Foundation for the Determination
of the Hubble Constant and Stronger Evidence for Physics Beyond ΛCDM ~ Adam G. Riess et al The Local Perspective on the Hubble Tension: Local Structure Does Not Impact
Measurement of the Hubble Constant ~ W. D'Arcy Kenworthy, Dan Scolnic, Adam Riess
viewtopic.php?p=289610#p289610
viewtopic.php?p=288610#p288610
viewtopic.php?t=38052
viewtopic.php?t=35824
Know the quiet place within your heart and touch the rainbow of possibility; be
alive to the gentle breeze of communication, and please stop being such a jerk. — Garrison Keillor
Top

STSCI-H-p1928a-z.jpg
These galaxies are selected from a Hubble Space Telescope program to measure the
expansion rate of the universe, called the Hubble constant. The value is calculated by
comparing the galaxies' distances to the apparent rate of recession away from Earth
(due to the relativistic effects of expanding space).

By comparing the apparent brightnesses of the galaxies' red giant stars with nearby
red giants, whose distances were measured with other methods, astronomers are able
to determine how far away each of the host galaxies are. This is possible because red
giants are reliable milepost markers because they all reach the same peak brightness in
their late evolution. And, this can be used as a "standard candle" to calculate distance.
Hubble's exquisite sharpness and sensitivity allowed for red giants to be found in the
stellar halos of the host galaxies.

The red giants were searched for in the halos of the galaxies. The center row shows
Hubble's full field of view. The bottom row zooms even tighter into the Hubble fields.
The red giants are identified by yellow circles.

Credits: NASA, ESA, W. Freedman (Univ of Chicago), ESO, Digitized Sky Survey
Astronomers have made a new measurement of how fast the universe is expanding, using an entirely different kind of star than previous endeavors. The revised measurement, which comes from NASA's Hubble Space Telescope, falls in the center of a hotly debated question in astrophysics that may lead to a new interpretation of the universe's fundamental properties.

Scientists have known for almost a century that the universe is expanding, meaning the distance between galaxies across the universe is becoming ever more vast every second. But exactly how fast space is stretching, a value known as the Hubble constant, has remained stubbornly elusive.

Now, University of Chicago professor Wendy Freedman and colleagues have a new measurement for the rate of expansion in the modern universe, suggesting the space between galaxies is stretching faster than scientists would expect. Freedman's is one of several recent studies that point to a nagging discrepancy between modern expansion measurements and predictions based on the universe as it was more than 13 billion years ago, as measured by the European Space Agency's Planck satellite.

As more research points to a discrepancy between predictions and observations, scientists are considering whether they may need to come up with a new model for the underlying physics of the universe in order to explain it. ...

In a new paper accepted for publication in The Astrophysical Journal, Freedman and her team announced a new measurement of the Hubble constant using a kind of star known as a red giant. Their new observations, made using Hubble, indicate that the expansion rate for the nearby universe is just under 70 kilometers per second per megaparsec (km/sec/Mpc). One parsec is equivalent to 3.26 light-years distance.

This measurement is slightly smaller than the value of 74 km/sec/Mpc recently reported by the Hubble SH0ES (Supernovae H0 for the Equation of State) team using Cepheid variables, which are stars that pulse at regular intervals that correspond to their peak brightness. This team, led by Adam Riess of the Johns Hopkins University and Space Telescope Science Institute, Baltimore, Maryland, recently reported refining their observations to the highest precision to date for their Cepheid distance measurement technique. ...

The Carnegie-Chicago Hubble Program. VIII. An Independent Determination of the
Hubble Constant Based on the Tip of the Red Giant Branch ~ Wendy L. Freedman et al
You do not have the required permissions to view the files attached to this post.
Know the quiet place within your heart and touch the rainbow of possibility; be
alive to the gentle breeze of communication, and please stop being such a jerk. — Garrison Keillor
Top

Keck: A Crisis in Cosmology

The study comes on the heels of a hot debate over just how fast the universe is ballooning; measurements thus far are in disagreement.

The team’s new measurement of the Hubble Constant, or the expansion rate of the universe, involved a different method. They used NASA’s Hubble Space Telescope (HST) in combination with W. M. Keck Observatory’s Adaptive Optics (AO) system to observe three gravitationally-lensed systems. This is the first time ground-based AO technology has been used to obtain the Hubble Constant. ...

To rule out any bias, the team conducted a blind analysis; during the processing, they kept the final answer hidden from even themselves until they were convinced that they had addressed as many possible sources of error as they could think of. This prevented them from making any adjustments to get to the “correct” value, avoiding confirmation bias. ...

The unblinding revealed a value that is consistent with Hubble Constant measurements taken from observations of “local” objects close to Earth, such as nearby Type Ia supernovae or gravitationally-lensed systems; Chen’s team used the latter objects in their blind analysis.

The team’s results add to growing evidence that there is a problem with the standard model of cosmology, which shows the universe was expanding very fast early in its history, then the expansion slowed down due to the gravitational pull of dark matter, and now the expansion is speeding up again due to dark energy, a mysterious force. ...

A SHARP view of H0LiCOW: H0 from three time-delay
gravitational lens systems with adaptive optics imaging ~ Geoff C.-F. Chen et al
You do not have the required permissions to view the files attached to this post.
Know the quiet place within your heart and touch the rainbow of possibility; be
alive to the gentle breeze of communication, and please stop being such a jerk. — Garrison Keillor
Top

Astronomy Now wrote:
A group of astronomers led by University of California, Davis has obtained new data that suggest the universe is expanding more rapidly than previously thought.

The study comes on the heels of a hot debate over just how fast the universe is ballooning; measurements thus far are in disagreement.

The team’s new measurement of the Hubble constant, or the expansion rate of the universe, involved a different method. They used NASA’s Hubble Space Telescope (HST) in combination with W. M. Keck Observatory’s Adaptive Optics (AO) system to observe three gravitationally-lensed systems. This is the first time ground-based AO technology has been used to obtain the Hubble Constant...

Andy Fell of UC Davis wrote:
Graduate student Geoff Chen, Fassnacht and colleagues looked at light from extremely distant galaxies that is distorted and split into multiple images by the lensing effect of galaxies (and their associated dark matter) between the source and Earth. By measuring the time delay for light to make its way by different routes through the foreground lens, the team could estimate the Hubble constant.

Using adaptive optics technology on the W.M. Keck telescopes in Hawaii, they arrived at an estimate of 76.8 kilometers per second per megaparsec. As a parsec is a bit over 30 trillion kilometers and a megaparsec is a million parsecs, that is an excruciatingly precise measurement. In 2017, the H0LICOW team published an estimate of 71.9, using the same method and data from the Hubble Space Telescope.

The new SHARP/H0LICOW estimates are comparable to that by a team led by Adam Reiss of Johns Hopkins University, 74.03, using measurements of a set of variable stars called the Cepheids. But it’s quite a lot different from estimates of the Hubble constant from an entirely different technique based on the cosmic microwave background. That method, based on the afterglow of the Big Bang, gives a Hubble constant of 67.4, assuming the standard cosmological model of the universe is correct...

The team’s analysis paves the way for better measurements in the future using telescopes from the Cherenkov Telescope Array. Image Credit: Daniel López/IAC

Wielding state-of-the-art technologies and techniques, a team of Clemson University astrophysicists has added a novel approach to quantifying one of the most fundamental laws of the universe. ...

With the help of skyrocketing technologies, astronomers came up with measurements that differed significantly from Hubble’s original calculations – slowing the expansion rate down to between 50 and 100 kilometers per second per megaparsec. And in the past decade, ultra-sophisticated instruments, such as the Planck satellite, have increased the precision of Hubble’s original measurements in relatively dramatic fashion.

... the collaborative team compared the latest gamma-ray attenuation data from the Fermi Gamma-ray Space Telescope and Imaging Atmospheric Cherenkov Telescopes to devise their estimates from extragalactic background light models. This novel strategy led to a measurement of approximately 67.5 kilometers per second per megaparsec. ...


A New Measurement of the Hubble Constant and Matter Content of the Universe
Using Extragalactic Background Light γ-Ray Attenuation ~ Alberto Domínguez et al
Know the quiet place within your heart and touch the rainbow of possibility; be
alive to the gentle breeze of communication, and please stop being such a jerk. — Garrison Keillor
Top
5 posts • Page 1 of 1