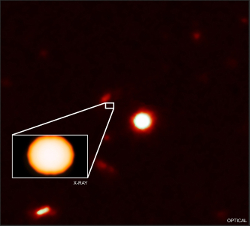 
A neutron star is an incredibly dense objects produced by the supernova explosion of a massive star at the end of its life. Sometimes two neutron stars form a binary system. Presumably these binary neutron stars are descendants of binary systems consisting of two normal, massive stars, and somehow the supernova explosion of each star in the system does not rip the binary apart. We don't really know how often this happens or how many neutron star binary systems there are in our Galaxy. If either of the neutron stars in the binary is a pulsar, orbital motion might be detected from a periodic change in the frequency of the pulse of radio or X-ray radiation emitted by the pulsar due to its orbital motion. Neutron star binaries can be revealed by the gravitational waves produced in spacetime by acceleration of the neutron stars in the binary, similar to the way two boats circling each other produce waves on a lake. Gravitational wave telescopes like LIGO and VIRGO have already detected the strong, variable gravitational waves from one, and perhaps two neutron star binaries during their death inspiral and collision. The collision of a neutron star with another is one of the most powerful events we know of, and should produce powerful radiation. And in fact, a burst of powerful gamma rays was detected from the first neutron star binary merger ever seen, GW 170817. Theories suggest that the gamma rays should be emitted in a narrow beam, and if the beam is not directed at us, we might not see the gamma-ray emission. But neutron star collisions should also produce X-ray emission which is more spread out. A new analysis of data taken the Chandra X-ray Observatory revealed an unusual X-ray transient which appeared suddenly before fading away, with no detectable optical counterpart. The small box in the optical image above shows the location where the X-ray source appeared in an apparently blank region of space. The X-ray source near peak X-ray brightness is shown in the inset. The manner in which this source brightened and faded in X-rays, the types of X-rays the source produced, and its apparent association with a distant galaxy, tell astronomers that this transient X-ray event was probably produced by the merger of two neutron stars in a binary. Scientists believe this titanic merger produced an even more massive, highly magnetized neutron star called a magnetar. Observations like this provide a new way to identify neutron star mergers and help scientists understand how magnetars may be formed.

CXC: A New Signal for a Neutron Star Collision Discovered Credit: X-ray: NASA/CXC/Univ of Science and Technology of China/
Y.Q. Xue et al; Optical: NASA/STScI (Click for animation)
These images show the location of an event, discovered by NASA's Chandra X-ray Observatory, that likely signals the merger of two neutron stars. A bright burst of X-rays in this source, dubbed XT2, could give astronomers fresh insight into how neutron stars — dense stellar objects packed mainly with neutrons — are built.

XT2 is located in a galaxy about 6.6 billion light years from Earth. The source is located in the Chandra Deep Field South (CDF-S), a small patch of sky in the Fornax constellation. The CDF-S is the deepest X-ray image ever taken, containing almost 12 weeks of Chandra observing time. The wider field of view shows an optical image from the Hubble Space Telescope of a portion of the CDF-S field, while the inset shows a Chandra image focusing only on XT2. The location of XT2, which was not detected in optical images, is shown by the rectangle, and its host galaxy is the small, oval-shaped object located slightly to the upper left.

On March 22, 2015, astronomers saw XT2 suddenly appear in the Chandra data and then fade away after about seven hours. By combing through the Chandra archive, they were able to piece together the history of the source's behavior. The researchers compared the data from XT2 to theoretical predictions made in 2013 of what the X-ray signature from two colliding neutron stars without a corresponding gamma ray bursts would look like. ...


A Magnetar-Powered X-ray Transient as the Aftermath of a Binary Neutron-Star Merger ~ Y. Q. Xue et al
Know the quiet place within your heart and touch the rainbow of possibility; be
alive to the gentle breeze of communication, and please stop being such a jerk. — Garrison Keillor
Top
2 posts • Page 1 of 1