Explanation: The colorful clouds surrounding the star system Rho Ophiuchi compose one of the closest star forming regions. Rho Ophiuchi itself is a binary star system visible in the blue reflection nebula just to the left of the image center. The star system, located only 400 light years away, is distinguished by its multi-colored surroundings, which include a red emission nebula and numerous light and dark brown dust lanes. Near the lower left of the Rho Ophiuchi molecular cloud system is the yellow star Antares, while a distant but coincidently-superposed globular cluster of stars, M4, is visible just to the right of Antares. Near the image top lies IC 4592, the Blue Horsehead nebula. The blue glow that surrounds the Blue Horsehead's eye -- and other stars around the image -- is a reflection nebula composed of fine dust. On the featured image right is a geometrically angled reflection nebula cataloged as Sharpless 1. Here, the bright star near the dust vortex creates the light of surrounding reflection nebula. Although most of these features are visible through a small telescope pointed toward the constellations of Ophiuchus, Scorpius, and Sagittarius, the only way to see the intricate details of the dust swirls, as featured above, is to use a long exposure camera.

A beautiful and colorful image, where the blue hues appear to have been somewhat muted.

I really like the way the picture at left emphasizes the components of this cosmic object. There is, of course, the hot blue (binary) star, made up of a B1V and a B2V component. The star is surrounded by a relatively faint red emission nebula, because Pi Sco is not hot enough to produce all the ultraviolet photons needed to ionize a bright emission nebula. And then, in front of the star and the emission nebula, there is a rather dull and gloomy blue reflection nebula, whose dust reflects the bright blue light of the star.

Note how the almost vertical wall of the reflection nebula appears very straight and smooth, as if it was sculpted by a very strong and steady stellar wind. But the wall at left appears to smoking and evaporating. Actually, that is typically what happens to dusty nebulas in the vicinity of very hot stars. Their dust grains are "cooked" to smaller sizes, so that they can no longer reflect blue light. That is why we so rarely see stars that are surrounded by both emission and reflection nebulas. 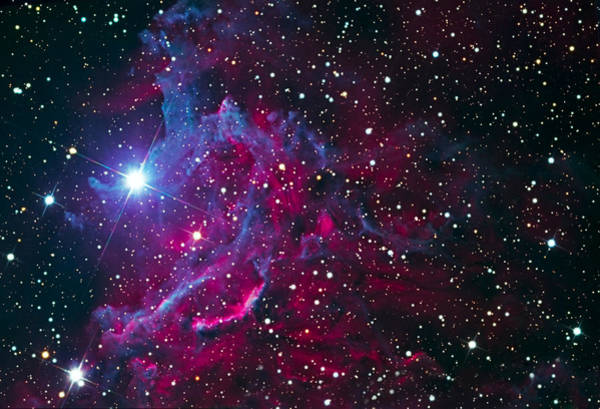 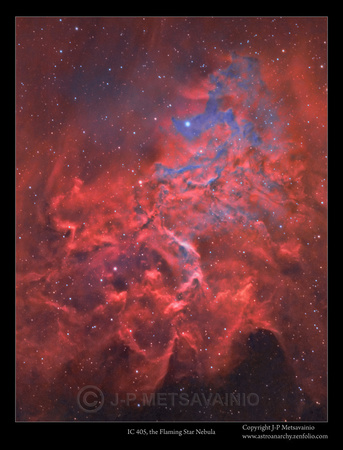 The reason why the Flaming Star Nebula is both a reflection and an emission nebula is because the hot ionizing star AE Auriga is a runaway star that is just paying a quick visit to the dust cloud that it is lighting up. AE Aurigae is an O-type star, albeit only an O.5V star, but it is nevertheless considerably more powerful than Pi Scorpii. AE Aurigae is leaving the dust cloud in turmoil as it is ploughing right through it, and some contorted dust tendrils are reflecting the bright blue light of the hot star. And a lot of the gas is ionized and made to glow red. 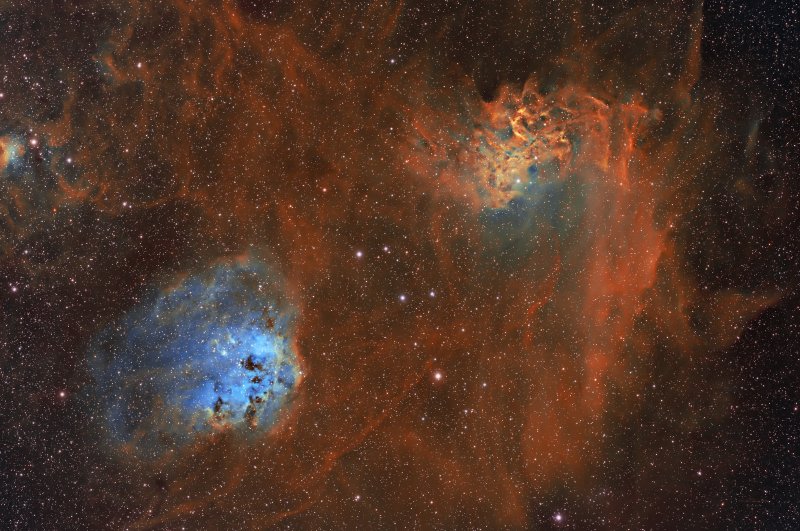