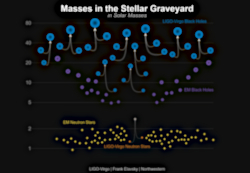 
Often, stars 8 or more times as massive as our Sun may be found in binary systems, orbiting around another, similarly massive star. Massive stars like this end their lives by exploding and converting themselves into black holes or neutron stars. So, we expect that there should be a significant fraction of binary systems composed of two black holes orbiting each other, or two neutron stars bound together, or some combination thereof. These dead, compact binaries can be hard to detect, especially the black hole+black hole systems which probably don't produce a great deal of electromagnetic radiation. So we don't have very good constraints on how many such systems there are in our Galaxy and beyond. This is an important question, since the number of these dead massive stars plays an important role in our understanding of the way new chemical elements are cooked up and dispersed into space, and on how smaller black holes combine themselves into larger ones. According to Einstein's theory of gravity, massive bodies in orbit around each other create ripples in spacetime, somewhat analogous to the ripples produced by two boat circling each other on a lake. Although these ripples are almost unbelievably tiny, in recent years we've developed technology sensitive enough to detect them. The Laser Interferometer Gravitational wave Observatory (LIGO), working in tandem with the European Virgo Gravitational wave observatory provide a powerful team to detect the tiny oscillations of spacetime produced when to black holes or neutron stars spiral together and merge. The image above catalogs the masses and types of systems detected by LIGO and Virgo up through the end of 2018, along with the masses of neutron stars and black holes which have normal-type stellar companions, for comparison. Interestingly, the black hole mergers seem to be significantly more massive than the other systems. LIGO has just started its third observing run, with upgraded and more sensitive detectors which are generating new detections almost weekly. Stay tuned!