An INAF-lead team of researchers explored whether the anomalous features in the dust and gas distributions of HD 163296's disk revealed by ALMA's observations could arise from the interaction of the giant planets with a component of the disk previously unaccounted for: the planetesimals 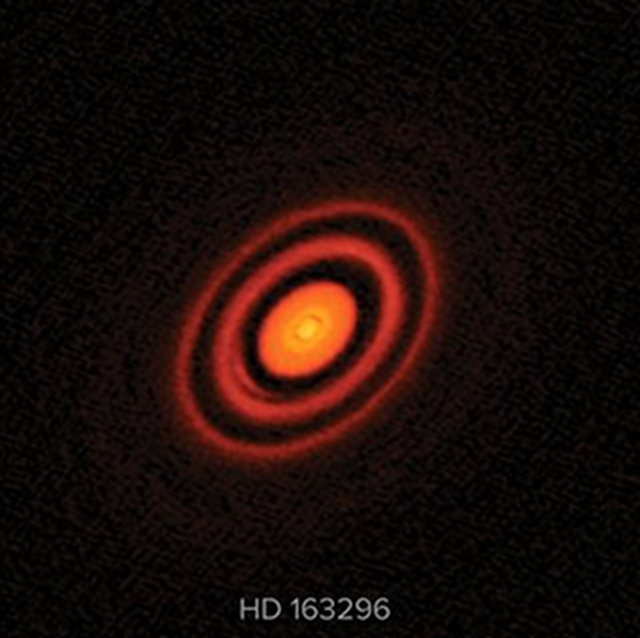 The circumstellar disk surrounding HD 163296 and the system of gaps and rings created by its young giant planets as recently imaged by ALMA (DSHARP Project). Credits: ALMA (ESO/NAOJ/NRAO), S. Dagnello

The circumstellar disks composed of gas and dust surrounding young forming stars are the environment in which planets are born. Their dust provides the building material from which planets begin their growth and, as a result of its incorporation into planetary bodies, its abundance is expected to decline over time. Since its first images of the bright concentric rings of the circumstellar disk around HL Tau, ALMA has been revolutionizing our view of circumstellar disks by revealing the widespread presence of a number of small-scale structures (gaps, rings and spiral arms) in their gas and dust, most of them believed to be linked to the presence of young planets and to arise from the interplay of their gravity with their surrounding environment.

Among the best-studied disks observed by ALMA is that surrounding HD 163296, a 5 Myr-old star about twice the mass of the Sun. HD 163296's disk is both massive (a bit less than one tenth of the Sun's mass) and wide (about 500 au, twice the outer boundary of the Kuiper Belt in the Solar System) and has been proposed to be home to at least three planets with masses comprised between twice that of Uranus and the one of Jupiter. ALMA's most recent observations allowed to spatially and compositionally characterize the structure of HD 163296's disk to a level previously undreamed of and showed how dust is still quite abundant (more than 300 times the mass of the Earth) in this disk notwithstanding its age and having produced at least three giant planets. The same observations also revealed some strange behaviors of the dust spatial distribution that could not easily be explained only as the result of its interplay with the gas and the newly formed giant planets. ...


Dust-to-Gas Ratio Resurgence in Circumstellar Disks Due to
the Formation of Giant Planets: The Case of HD 163296 ~ Diego Turrini et al
viewtopic.php?t=38370
viewtopic.php?t=36638
viewtopic.php?t=21067
Know the quiet place within your heart and touch the rainbow of possibility; be
alive to the gentle breeze of communication, and please stop being such a jerk. — Garrison Keillor
Top
1 post • Page 1 of 1