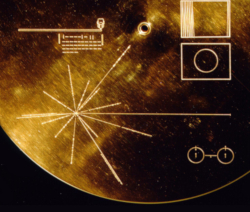 
Knowing where you are and where you're going in the infinite depths of outer space can be quite daunting. Predicting where you'll be requires knowing where you are, knowing how fast you're going in a particular direction, and knowing how long you've been traveling. Timing precision is vital, since even a tiny uncertainty in time can accumulate to large position errors for spacecraft on astronomically long journeys. Highly-precise atomic clocks on the ground (like the Master Clock at the US Naval Observtory) or in orbit around earth (like the Global Positioning System and the other navigational satellites which make up the Global Navigation Satellite System) can be used to provide highly accurate positions for satellites closer than the moon. For more distant journeys, signals from near earth traveling at the finite speed of light can take hours or more to reach the spacecraft; for example, it currently takes a signal from earth more than 20 hours to reach Voyager 1, the most distant spacecraft still operating. But fortunately, nature does provide deep space travelers with natural lighthouses which can be used for onboard guidance. These natural lighthouses are spinning neutron stars called pulsars, which, as they spin, generate flashes of X-ray emission from beams aligned with the neutron star's magnetic axis. The pulse periods of these spinning neutron stars rival the precision of atomic clocks. By measuring the X-ray pulse periods for a set of X-ray pulsars distributed throughout the Milky Way, in principle a spacecraft could navigate anywhere in the Galaxy. Pulsar navigation is an idea with an honored history, actually, and was used on Pioneer 10 and 11 (our first ships sailing beyond the solar system), and on the Golden Record carried by the Voyager spacecraft. The image above shows the cover of the Golden Record, with the pulsar-based map to earth in the lower left corner. X-ray pulsar navigation has already been demonstrated on the International Space Station through an experiment called SEXTANT, the Station Explorer for X-ray Timing and Navigation Technology. SEXTANT uses the Neutron star Interior Composition ExploreR (NICER) X-ray observatory, berthed on the ISS, as the pulsar detector. It's hoped one day that X-ray navigation using pulsars will enable robotic (or even human) exploration of the outer solar system (and beyond?).