Astronomers have directly imaged two exoplanets that are gravitationally carving out a wide gap within a planet-forming disk surrounding a young star. While over a dozen exoplanets have been directly imaged, this is only the second multi-planet system to be photographed. (The first was a four-planet system orbiting the star HR 8799.) Unlike HR 8799, though, the planets in this system are still growing by accreting material from the disk. ...

The host star, known as PDS 70, is located about 370 light-years from Earth. The young 6-million-year-old star is slightly smaller and less massive than our Sun, and is still accreting gas. It is surrounded by a disk of gas and dust that has a large gap extending from about 1.9 to 3.8 billion miles.

PDS 70 b, the innermost known planet, is located within the disk gap at a distance of about 2 billion miles from its star, similar to the orbit of Uranus in our solar system. The team estimates that it weighs anywhere from 4 to 17 times as much as Jupiter. It was first detected in 2018.

PDS 70 c, the newly discovered planet, is located near the outer edge of the disk gap at about 3.3 billion miles from the star, similar to Neptune’s distance from our Sun. It is less massive than planet b, weighing between 1 and 10 times as much as Jupiter. The two planetary orbits are near a 2-to-1 resonance, meaning that the inner planet circles the star twice in the time it takes the outer planet to go around once.

The discovery of these two worlds is significant because it provides direct evidence that forming planets can sweep enough material out of a protoplanetary disk to create an observable gap. ...


Two Accreting Protoplanets around the Young Star PDS 70 ~ S.Y. Haffert et al
viewtopic.php?p=285135#p285135
viewtopic.php?t=38435
viewtopic.php?t=30002
Know the quiet place within your heart and touch the rainbow of possibility; be
alive to the gentle breeze of communication, and please stop being such a jerk. — Garrison Keillor
Top 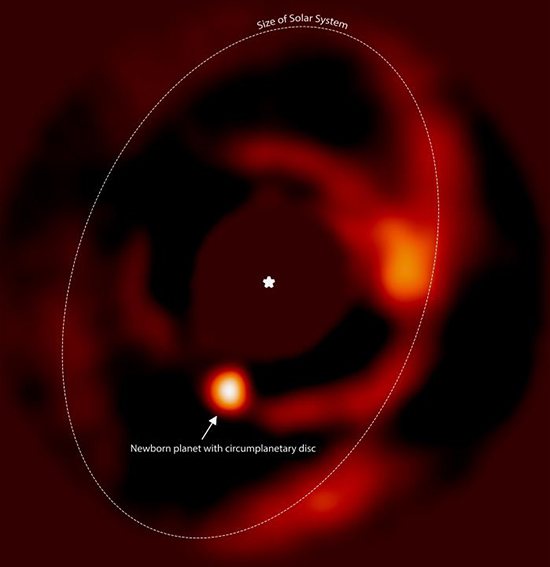 Infrared image of the newborn planet PDS 70 b and its circumplanetary disc. Size of the Solar System given for comparison. Credit: V. Christiaens et al./ ESO

An international study led by the Monash School of Physics and Astronomy has discovered the first observational evidence for the existence of circumplanetary discs.

The study published in the Astrophysical Journal Letters focused on young planets still in the process of formation (typically only a few million years old).

“Our research helps us to understand how our 4.6 billion year-old Solar System came about, and how we got here,” said lead study author Dr Valentin Christiaens, a Postdoctoral Research Fellow in Astrophysics at Monash University.

“We found the first evidence for a disc of gas and dust around it - known as a circumplanetary disc,” said Dr Christiaens.

“We think the large moons of Jupiter and other gas giants were born in such a disc, so our work helps to explain how planets in our Solar System formed,” he said.

Seeing the moons of Jupiter through a telescope had Galileo arrested in his day, because he saw that not everything orbited the Earth, and we were therefore not the centre of the Universe. ...


Evidence for a Circumplanetary Disk around Protoplanet PDS 70 b ~ Valentin Christiaens et al
Know the quiet place within your heart and touch the rainbow of possibility; be
alive to the gentle breeze of communication, and please stop being such a jerk. — Garrison Keillor
Top 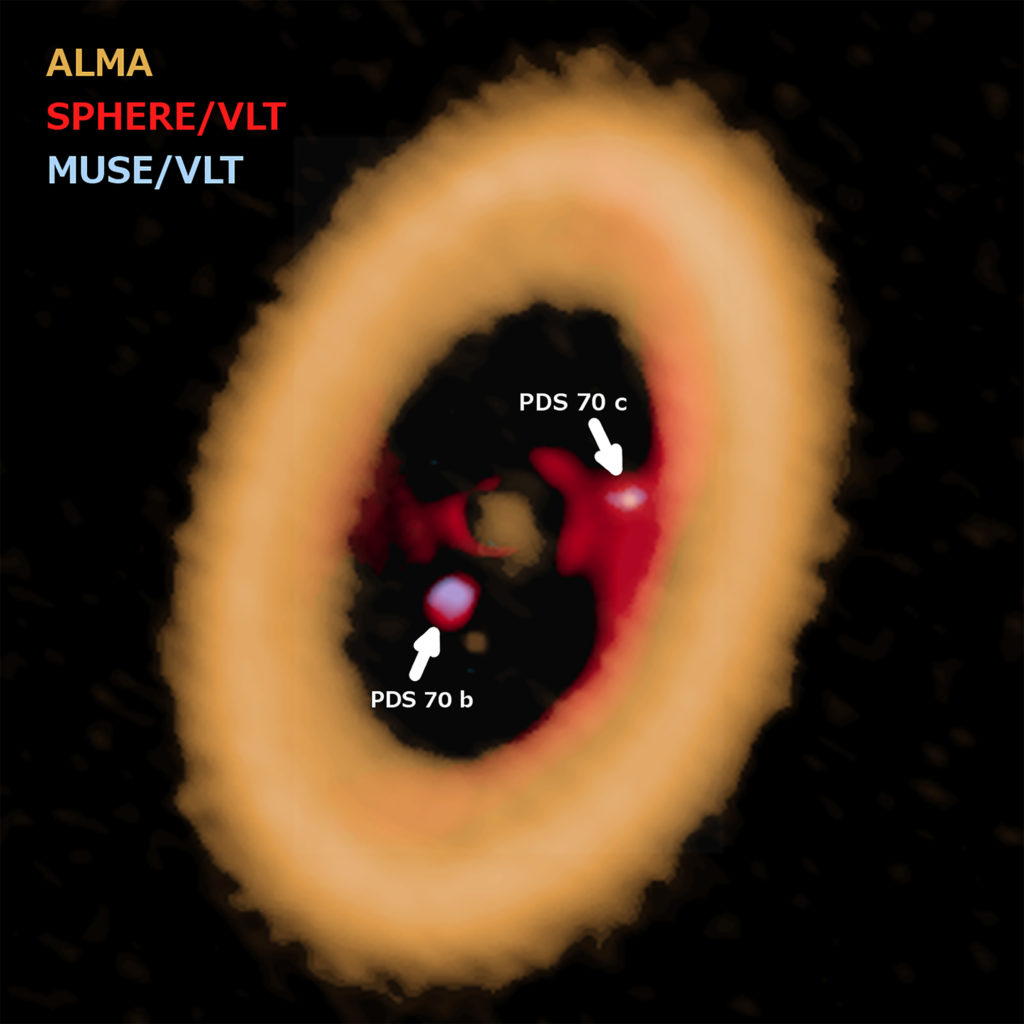 Composite image of PDS 70. Comparing new ALMA data to earlier VLT observations, astronomers determined that the young planet designated PDS 70 c has a circumplanetary disk, a feature that is strongly theorized to be the birthplace of moons. Credit: ALMA (ESO/NOAJ/NRAO) A. Isella; ESO

Astronomers using the Atacama Large Millimeter/submillimeter Array (ALMA) have made the first-ever observations of a circumplanetary disk, the planet-girding belt of dust and gas that astronomers strongly theorize controls the formation of planets and gives rise to an entire system of moons, like the one found around Jupiter.

This young star system, PDS 70, is located approximately 370 light-years from Earth. Recently, astronomers confirmed the presence of two massive, Jupiter-like planets in orbit around the star. This discovery was made with the European Southern Observatory’s Very Large Telescope (VLT), which detected the warm glow naturally emitted by hydrogen gas accreting onto the planets.

The new ALMA observations instead image the faint radio waves given off by the tiny (about one tenth of a millimeter across) particles of dust around the star.

The ALMA data, combined with the earlier optical and infrared VLT observations, provide compelling evidence that a dusty disk capable of forming multiple moons surrounds the outermost known planet in the system. ...

The ALMA data also revealed two distinct differences between the two newly discovered planets. The closer in of the two, PDS 70 b, which is about the same distance from its star as Uranus is from the Sun, has a trailing mass of dust behind it resembling a tail. “What this is and what it means for this planetary system is not yet known,” said Isella. “The only conclusive thing we can say is that it is far enough from the planet to be an independent feature.”

The second planet, PDS 70 c, resides in the same location as a clear knot of dust seen in the ALMA data. Since this planet is shining so brightly in the infrared and hydrogen bands of light, the astronomers can convincingly say that a fully formed planet is already in orbit there and that nearby gas continues to be siphoned onto the planet’s surface, finishing its adolescent growth spurt.

This outer planet is located approximately 5.3 billion kilometers from the host star, about the same distance as Neptune from our Sun. Astronomers estimate that this planet is approximately 1 to 10 times the mass of Jupiter. “If the planet is on the larger end of that estimate, it’s quite possible there might be planet-size moons forming around it,” noted Isella. ...

Detection of Continuum Submillimeter Emission Associated with Candidate Protoplanets ~ Andrea Isella et al
Know the quiet place within your heart and touch the rainbow of possibility; be
alive to the gentle breeze of communication, and please stop being such a jerk. — Garrison Keillor
Top
3 posts • Page 1 of 1