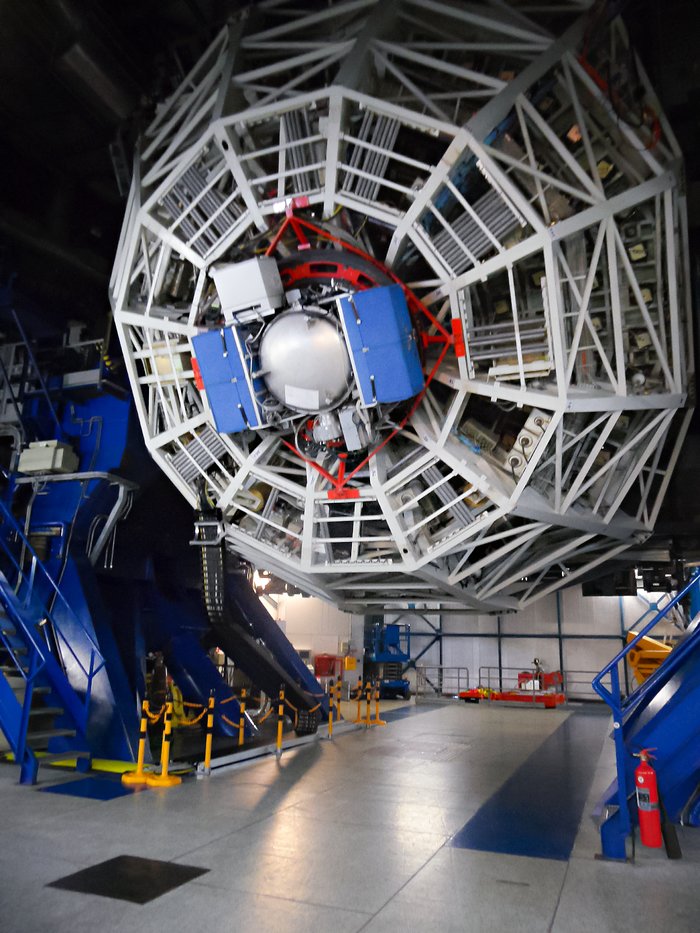 ESO’s Very Large Telescope (VLT) has recently received an upgraded addition to its
suite of advanced instruments. On 21 May 2019 the newly modified instrument VISIR
(VLT Imager and Spectrometer for mid-Infrared) made its first observations since
being modified to aid in the search for potentially habitable planets in the Alpha
Centauri system, the closest star system to Earth. This image shows NEAR mounted
on UT4, with the telescope inclined at low altitude. Credit: ESO/NEAR Collaboration
Breakthrough Watch and the European Southern Observatory achieve “first light” on upgraded planet-finding instrument to search for Earth-like planets in nearest star system

Newly-built planet-finding instrument installed on Very Large Telescope, Chile, begins 100-hour observation of nearby stars Alpha Centauri A and B, aiming to be first to directly image a habitable exoplanet

The instrument, called NEAR (Near Earths in the AlphaCen Region), is designed to hunt for exoplanets in our neighbouring star system, Alpha Centauri, within the “habitable zones” of its two Sun-like stars, where water could potentially exist in liquid form. It has been developed over the last three years and was built in collaboration with the University of Uppsala in Sweden, the University of Liège in Belgium, the California Institute of Technology in the US, and Kampf Telescope Optics in Munich, Germany.

Since 23 May ESO’s astronomers at ESO’s Very Large Telescope (VLT) have been conducting a ten-day observing run to establish the presence or absence of one or more planets in the star system. Observations will conclude tomorrow, 11 June. Planets in the system (twice the size of Earth or bigger), would be detectable with the upgraded instrumentation. The near- to thermal-infrared range is significant as it corresponds to the heat emitted by a candidate planet, and so enables astronomers to determine whether the planet’s temperature allows liquid water. ...