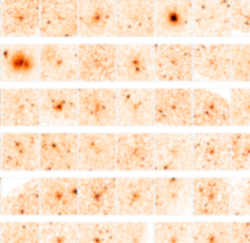 
Most of the normal matter in the universe (the kind of stuff that makes up our bodies, and our food, clothing and everything else) is strung out through space in a giant cosmic web. This web is marked not by stars or galaxies but by clusters of galaxies, enormous, gravitationally bound groups of dozens or hundreds of individual member galaxies. Most of the normal matter in these clusters of galaxies is contained not in the member galaxies themselves, but in the intra-cluster medium, an enormous amount of gas which lies between the member galaxies. This gas is actually invisible, but because it's heated by motions of the galaxies as they pass through it, and by supernovae and black hole outbursts, it becomes so hot that it emits X-rays. X-ray images of galaxy clusters are therefore an important way in which astronomers determine how much normal matter the clusters contain. The image above is a rogue's gallery of the X-ray images of 365 clusters of galaxies taken by the XMM-Newton X-ray space observatory as part of the XXL Survey, on of the largest surveys of galaxy clusters in the X-ray band. Because of the extraordinary sensitivity of XMM-Newton, many of the clusters are so far away that the X-rays seen by XMM-Newton left the clusters when the Universe was less than half its present age. The results of the XXL Survey are being used by scientists to test models of cosmology, predictions of the distribution of normal matter in the Universe, and to place stricter constraints on the nature of the mysterious Dark Energy which drives the Universe apart, and to understand its relation to Einstein's biggest blunder.