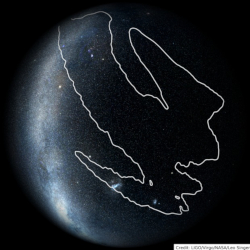 
The origin of very heavy elements, atomic nuclei with large numbers of protons and neutrons (like gold), has been a mystery for decades. The most obvious forge for these elements, supernovae explosions, do not seem to be able to be able to do it. Scientists were left searching for an alternative, finally fixing their gaze on an usual process: the merger of two (or more) neutron stars in a titanic collision might release enough neutron-rich material to build up these extraordinary atomic nuclei. For years, this seemed like the wildest speculation, until, in August 2017, the LIGO gravitational wave observatory detected the faint oscillations of spacetime produced by a neutron-star merger. Electromagnetic radiation from this merger event was detected by the Fermi Gamma-ray Space Telescope, INTEGRAL, and other space-based and ground-based telescopes, confirming the interpretation. These observations pinpointed the source as a neutron star merger occurring in a galaxy far from the Milky Way. But how often do such mergers occur? LIGO is hard at work trying to answer this question. On April 25, 2019, just a few weeks after the start of its third observing run, LIGO, with the addition of the Virgo gravitational wave observatory, detected gravitational waves from a second neutron star merger. This gravitational wave detection is called S190425z. The image above shows, in white, the outline of the region of the probable location of this merger event superposed on an all-sky image (the plane of the Milky Way is the diffuse band to the left). Since one of the two LIGO detectors happened to be off-line during this event, this resulted in a larger-than-usual search region, and, unfortunately, there was no electromagnetic signal detected from S190425z by any space or ground-based observatory. These detections are important to determine how frequently such mergers occur, and how much gold (and more importantly, molybdenum) the Universe may contain.