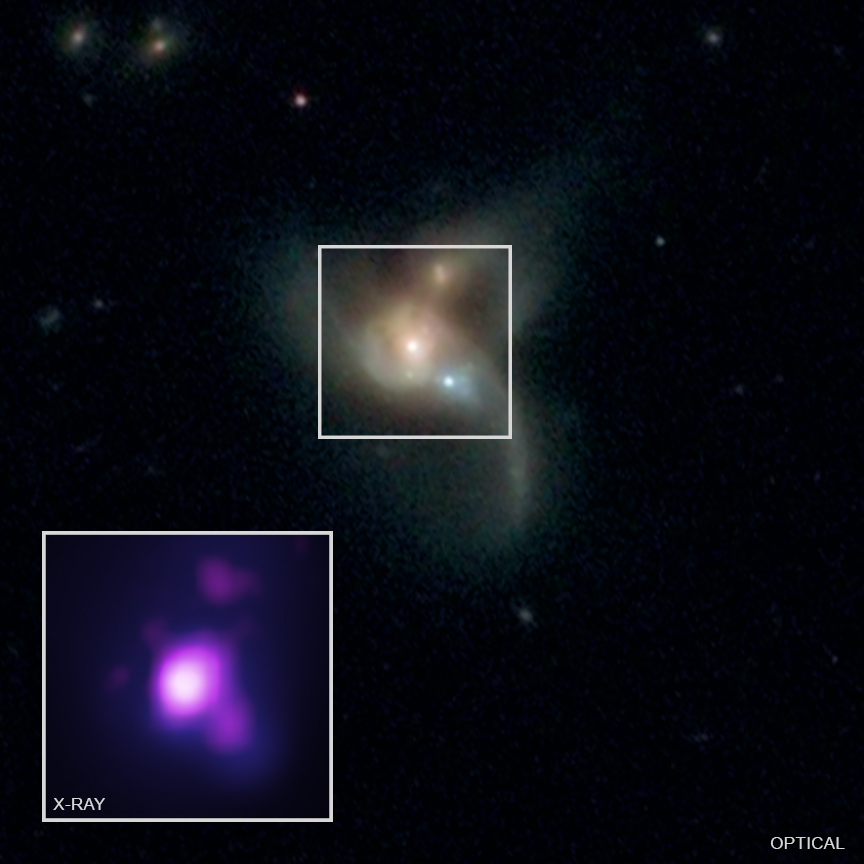 A new study using data from NASA's Chandra X-ray Observatory and other telescopes provides the strongest evidence yet for a system of three supermassive black holes, as described in our latest press release. Astronomers think these triplet collisions, while extremely rare, play a critical role in how the biggest black holes grow over time.

The system is known as SDSS J084905.51+111447.2 (SDSS J0849+1114 for short) and is located a billion light years from Earth. In this graphic, X-rays from Chandra (purple) are shown in the pull-out in comparison with optical light from the Hubble Space Telescope and the Sloan Digital Sky Survey (red, green, and blue) in the main panel.

The Chandra data revealed three X-ray sources — a tell-tale sign of material being consumed by the black holes — at the bright centers of each galaxy in the merger, exactly where scientists expect supermassive black holes to reside. The separations between the black holes range between about 10,000 and 30,000 light years. Chandra and NASA's Nuclear Spectroscopic Telescope Array (NuSTAR) satellite also found evidence for large amounts of gas and dust around one of the black holes, typical for a merging black hole system.

SDSS J0849+1114 was first flagged as a potential system of colliding black holes by SDSS with the help of citizen scientists across the globe as part of the Galaxy Zoo Project. ...


A Triple AGN in a Mid-Infrared Selected Late Stage Galaxy Merger ~ Ryan W. Pfeifle et al
Know the quiet place within your heart and touch the rainbow of possibility; be
alive to the gentle breeze of communication, and please stop being such a jerk. — Garrison Keillor
Top
1 post • Page 1 of 1