USRA/LPI: Was Venus Once Warm & Wet?

USRA/LPI: Was Venus Once Warm & Wet? 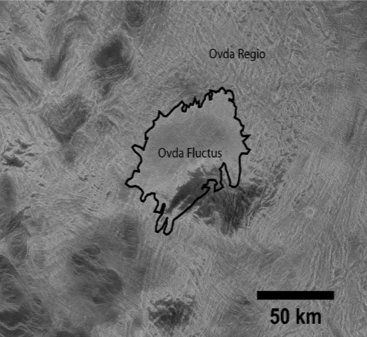 A new study of the Ovda Fluctus lava flow on Venus indicates that it is made of basaltic lava. This discovery weakens the notion that Venus might once have been Earth-like with an ancient ocean of liquid water.

Previous studies suggested that early Venus was once warm and wet based on the chemistry of its atmosphere and the presence of highlands. These highlands were thought to be formed of granitic rock, like Earth’s continents, which required oceans of water to form.

Scientists at the Lunar and Planetary Institute (LPI) ... find that a volcanic flow on Venus’ Ovda Regio highlands plateau is composed of basaltic lava, calling into question the idea that the planet might once have been Earth-like with an ancient ocean of liquid water.

The LPI team re-mapped the Ovda Fluctus lava flow using radar data. They discovered that the flow is not granitic as was expected from its location, but is more likely made up of basalt rock which can form with or without water. The result has potentially significant implications for the evolutionary history of Venus. ...


Ovda Fluctus, the Festoon Lava Flow on Ovda Regio, Venus: Not Silica-Rich ~ Frank B. Wroblewski et al
Know the quiet place within your heart and touch the rainbow of possibility; be
alive to the gentle breeze of communication, and please stop being such a jerk. — Garrison Keillor
Top
1 post • Page 1 of 1