Three supermassive black holes discovered at the core of one galaxy 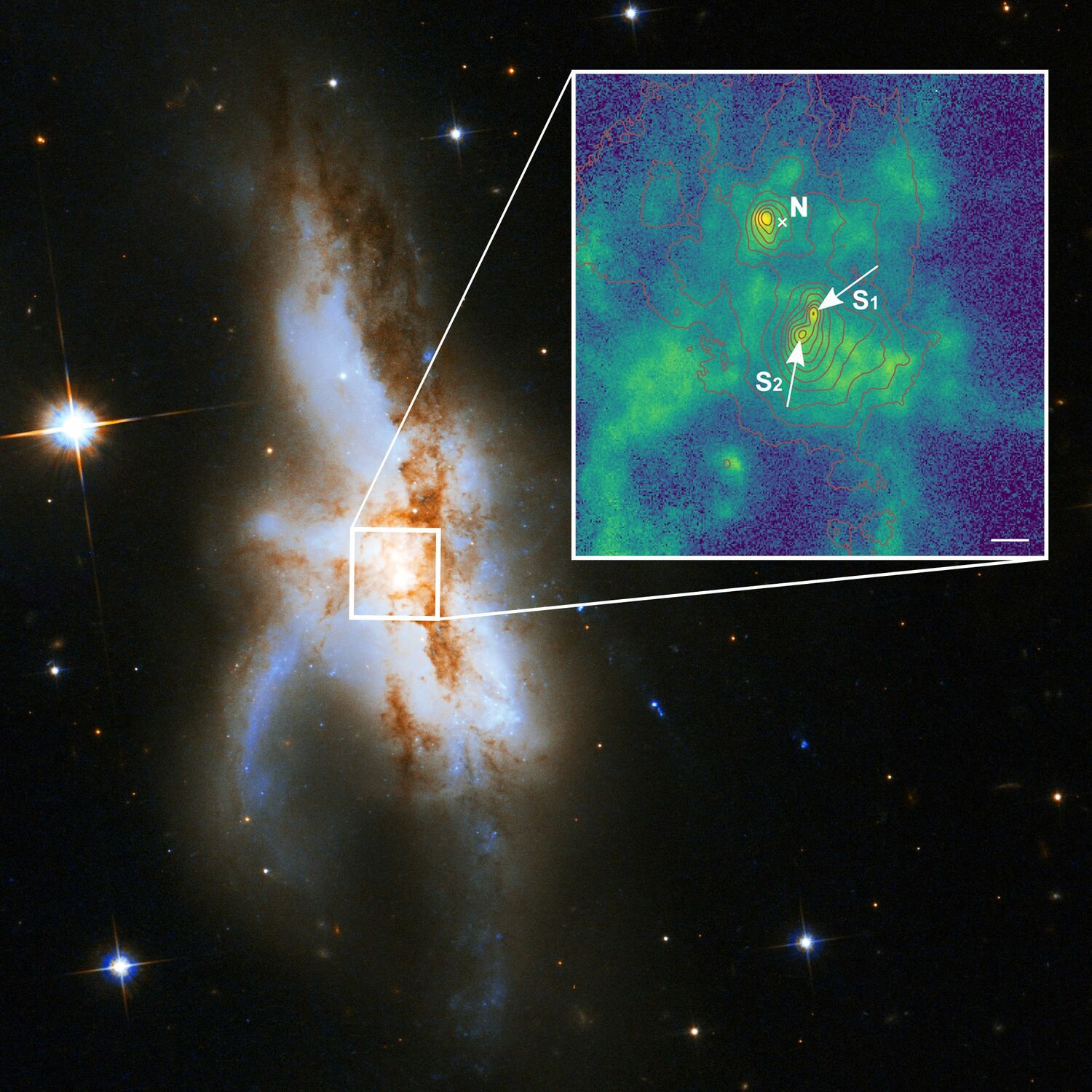 An international research team led by scientists from Göttingen and Potsdam proved for the first time that the galaxy NGC 6240 contains three supermassive black holes. The unique observations ... show the black holes close to each other in the core of the galaxy. The study points to simultaneous merging processes during the formation of the largest galaxies in the universe.

Massive Galaxies like the Milky Way typically consist of hundreds of billions of stars and host a black hole with a mass of several million up to several 100 million solar masses at their centres. The galaxy known as NGC 6240 is known as an irregular galaxy due to its particular shape. Until now, astronomers have assumed that it was formed by the collision of two smaller galaxies and therefore contains two black holes in its core. These galactic ancestors moved towards each other at velocities of several 100 km/s and are still in the process of merging. The galaxy system which is around 300 million light years away from us – close by cosmic standards – has been studied in detail at all wavelengths, and has so far been regarded as a prototype for the interaction of galaxies...

The discovery of this triple system is of fundamental importance for understanding the evolution of galaxies over time. Until now it has not been possible to explain how the largest and most massive galaxies, which we know from our cosmic environment in the "present time", were formed just by normal galaxy interaction and merging processes over the course of the previous 14 billion years approximately, ie the age of our universe. "If, however, simultaneous merging processes of several galaxies took place, then the largest galaxies with their central supermassive black holes were able to evolve much faster,” Peter Weilbacher summarizes. "Our observations provide the first indication of this scenario.” ...


NGC 6240: A Triple Nucleus System in the Advanced or Final State of Merging ~ W. Kollatschny et al
Know the quiet place within your heart and touch the rainbow of possibility; be
alive to the gentle breeze of communication, and please stop being such a jerk. — Garrison Keillor
Top

X-ray image of NGC 6240 taken with the Chandra X-Ray Observatory, superimposed on an optical image of the galaxy. The X-ray emission from the two active galactic nuclei can be seen as bright blue point sources. Credit: NASA.

Observations performed by Stefanie Komossa and collaborators with the Chandra X-Ray Observatory have detected strong hard X-ray emission from both of the nuclei. The intensity of this emission and the presence of emission from lowly ionized or neutral iron indicate that both of the nuclei are active galactic nuclei. Presumably, these are the black holes that were originally at the centers of the two merging galaxies. Over the course of millions of years, the two black holes are expected to come closer together and form a binary supermassive black hole. Recent studies using the MUSE instrument onboard the VLT have revealed that there are in fact three, not two, supermassive black holes at the core of this remnant. Two of the three black holes are active. The additional SMBH implies that three original galaxies are merging instead of two.>>