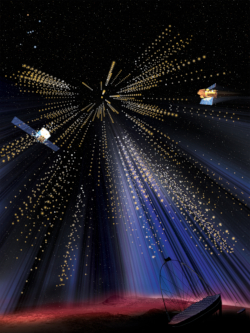 
Imagine what would happen if a black hole suddenly formed at the center of a star. Astronomers believe that this actually happens at least a few times per week when some very massive stars die. When a very massive star runs out of fuel in its core region, the enormous mass of the star crushes the core, squeezing it to density higher than the density of an atomic nucleus, forming an infinitely dense singularity surrounded by an event horizon. This is not good news for the star. Once a black hole forms at the center of a star, it starts to accrete the remaining outer layers of the star, forming an accretion disk around the black hole, and a powerful jet of extremely fast-movind charged particles and radiation. This jet blasts through the star, blowing the star away. When this beam is pointed in our direction, this stellar explosion produces an extremely powerful burst of gamma rays. Satellite observatories like the Fermi Gamma-ray Space Telescope and the Neil Gehrels Swift observatory have been discovering these bursts throughout the Universe, helping us understand how often black holes are formed. The illustration above shows a shower of gamma rays from a gamma-ray burst flooding the detectors on Fermi (the spacecraft on the left of the image) and Swift (on the right). Once localized by these satellites, astronomers are notified for follow-up observations by services like the Gamma-ray Coordinates Network/Transient Astronomy Network (GCN/TAN) and the Astronomer's Telegrams, which distribute news of interesting gamma-ray bursts and other transient celestial events via the internet. On January 19, 2019, an unusual burst was seen by both Fermi and Swift. Fermi's Large Area Telescope showed that this burst was unusually energetic, generating higher-energy gamma-ray emission than any other burst seen by Fermi. After notification by the Swift and Fermi teams, the huge telescopes of the Major Atmospheric Gamma Imaging Cherenkov observatory, or MAGIC, were quickly pointed at the burst location. MAGIC is an observatory which is designed to detect the most energetic events in the Universe. MAGIC discovered that this particular burst produced radiation that was 10 times more energetic than seen by Fermi, making it the most energetic gamma-ray burst yet known.

https://en.wikipedia.org/wiki/MAGIC_(telescope) wrote:
<<MAGIC (Major Atmospheric Gamma Imaging Cherenkov Telescopes) is a system of two Imaging Atmospheric Cherenkov telescopes situated at the Roque de los Muchachos Observatory on La Palma, one of the Canary Islands, at about 2200 m above sea level. MAGIC detects particle showers released by gamma rays, using the Cherenkov radiation, i.e., faint light radiated by the charged particles in the showers. With a diameter of 17 meters for the reflecting surface, it was the largest in the world before the construction of H.E.S.S. II.

The first telescope was built in 2004 and operated for five years in standalone mode. A second MAGIC telescope (MAGIC-II), at a distance of 85 m from the first one, started taking data in July 2009. Together they integrate the MAGIC telescope stereoscopic system.
A much more controversial observation is an energy dependence in the speed of light of cosmic rays coming from a short burst of the blazar Markarian 501 on July 9, 2005. Photons with energies between 1.2 and 10 TeV arrived 4 minutes after those in a band between 0.25 and 0.6 TeV. The average delay was 30 ±12 ms per GeV of energy of the photon. If the relation between the space velocity of a photon and its energy is linear, then this translates into the fractional difference in the speed of light being equal to minus the photon's energy divided by 2×1017 GeV. The researchers have suggested that the delay could be explained by the presence of quantum foam, the irregular structure of which might slow down photons by minuscule amounts only detectable at cosmic distances such as in the case of the blazar.>>